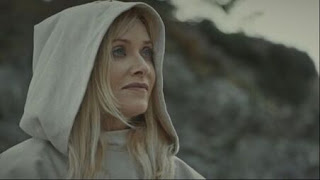 Originally called ‘The Color of Madness’. An American couple go to a Norwegian island to wrap up some family business concerning property there. The locals act unwelcoming and weird at first, but then… Perhaps this scenario is so familiar, especially when you throw in HP Lovecraft, that there surely needs a pay-off of distinction. Even ‘The Deep Ones’ had man-in-a-monster suit, but ‘Sacrifice’ arguably ends just when expectations are highest, resting on a feint of expectations. There’s decent playing: Sophie Stevens gives some nice no-nonsense gravity to the increasing craziness; horror icon Barbara Crampton applies an accent that occasionally seems to disappear, providing camp amusement value to an otherwise sturdy, nuanced performance. There’s a gorgeous location and a nice uneasiness (Americans: don’t go to Europe), with the linking of tradition to misogyny, but there isn’t quite enough to distinguish this from overt familiarity. 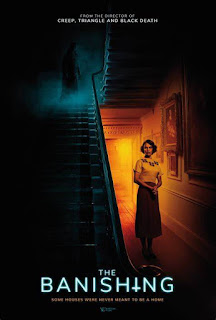 A repressed Reverend moves into a manor that is tainted with scandal as much as his wife and her child. They are neither as safe from the rise of fascism or vengeful ghosts as they might believe.

Haunted manors and ghostly monks will do it for me, and I jumped at one appearance. Actually, it had me at toy monks surrounding a toy bed. Otherwise, there is an agreeable quietude, some very eerie play with mirrors and the manor is a good old-fashioned location for hauntings. Sean Harris is there, chewing scenery whilst muttering “This place is cursed”, one of those characters who knows all the details of the plot and the haunting and can be relied upon as the font for exposition. When he says about going into the “Beyond”, it’s a little too ‘The Conjuring’ for my taste, but the film has built up a lot of goodwill by then. ‘The Banishing’ swings between agreeable understatement – therefore generating much creepiness – and obvious tropes, not quite failing either and not quite exceeding them either. There is a contemporary edge with a lot of play with the inherent blinkered faith of religion and fascism – made explicit with the character of Malachi (John Lynch) – and Marianne’s (Jessica Brown Findlay) defiance. But a definite success on such a micro-budget. Chris Smith says that his mind doesn’t work in the way of ‘The Woman in Black’, but I didn’t find this so far from that: belief, denial, period context, human frailty, angry irrepressible past... All the ingredients for a haunting are correct.