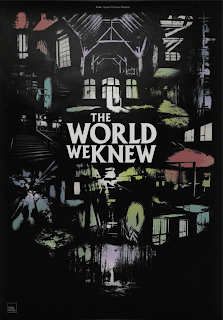 The World We Knew

The concept is Gangster’s versus Ghosts, with a concentration on the psychology. But British gangsters seem to come with that talking in cliché or colourful criminal style that is quickly tedious. Jones and Lake’s script is better than just ugly men snarking, but it’s still a group of criminals talking tough to each other. There’s the young’un, the psychopath, the veteran, etc. The cast is good, though, with what they have. You know there’s going to be speeches about the good ol’ days, about their dad, and there will storytelling and monologuing. Hiding out in a house after a job-gone-wrong, these men have to reckon with the ghosts of their past. It’s not jump scares, it’s about the characters. And then confrontations with ghosts just end up being more tough talk. A slow-burn is fine, but perhaps this depends upon how much you invest in a bunch of near-cliché men being sentimental and/or having a conscience about a reprehensible past. It doesn’t build to anything, but it does have a good endnote. 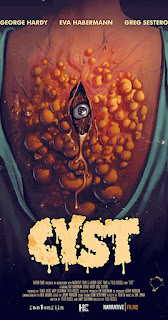 A gleefully silly creature-feature that reminds of early Roger Corman, or Frank Henenlotter, or  the films like ‘TerrorVision’ released on the Charles Band’s Entertainment (I always had a soft spot for ‘TerrorVison’… not exactly sure why). Set in the Sixties in a clinic where an increasingly off-his-rocker doctor (George Hardy having heaps of fun) treats cysts, it’s limitations are part of the fabric: as with  most mad scientist scenarios, it’s hilarious to think he made such a breakthrough device in his squalid clinic – it’s just a big block of dials and buttons made from whatever sciencey-looking equipment was seemingly left around his garage. The cyst monster is a glorious old-school practical effect with lots of squirty pus and a beachball eye (Russell said in the post-screening interview that about 80% of the effects were practical). A short run time, things kept just this side of zany although continuously ridiculous, with Eva Habermann greatly appealing and up for anything make this a lot of fun. 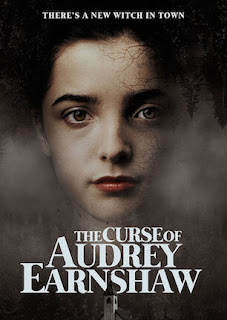 A somewhat generic horror title that does the content only nodding service. Originally called ‘The Ballad of Audrey Earnshaw’, or ‘The Curse of Audrey Earnshaw’, which are far more appropriate. But Alan Jones’ introduction referenced ‘The Witch’, so immediately upping my expectations.

Secretly living as occultists on the edge of a Protestant town, a mother and daughter collide with the community as the daughter’s asserts herself. Eerie things happen and soon it’s more than just crops not growing to contend with. There’s a good portrayal of a town besieged by witchcraft and Black Magic, menace and tragedy become the default with the story perhaps going not quite where you expect it to. Good performances; generational clashes run parallel with clashes with the community which is apposite for a coming-of-age tale; a consistent atmosphere of unease and washed-out tones dominate. I note accusations of loose plotting, but the bubble of dread besieging an isolated community, where seemingly random tragedies build up a bigger whole, is consistently the focus. A quiet, understated horror-drama of a whole town receiving the brunt of a girl’s displeasure. 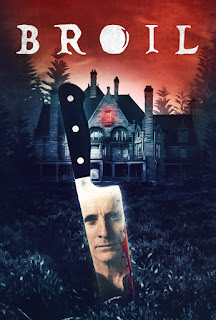 Any plot synopsis is likely to spoil ‘Broil’s drift. It starts like a typical high school scenario but the information and story then comes so thick and fast that for a while it’s uncertain what conventions it will follow. It uses many tricks of shuffling perspective and expectation so that when it does settle down, it doesn’t take too long with exposition and keeps up the speed and therefore maintains an entertaining momentum. It’s colourful, smart, and excellently played: one of its successes is that even the minor characters leave a mark. It’s a little more conventional than its razzle-dazzle surface, but it’s always engagingly played. There’s the theme of rich-people-are-different and Family Secrets, but it mostly services as a fun ride peppered with nastiness and a little genre-mashing. 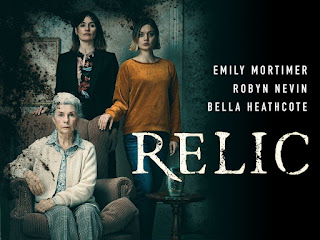 One of those horrors that is so rooted in relatable, sad and difficult reality – a mother and daughter facing grandma’s apparent Alzheimer’s – that when it slips into genre, you hardly see the joins. Satisfyingly chilling and emotionally authentic that it is no wonder it’s been getting a lot of praise. It has the kind of resonance that people with a narrow view of the genre wouldn’t expect. It uses the uncanny to both indicate illness and the genre: for example, it wasn’t a surprise when writer-director Jones said her grandma lived in a house that scared her. It probably goes without saying that the three female leads are exceptional,. Robyn Nevin's performance is brave and captivating, warm and unsettling, covering the whole gamut. Mortimer and Heathcoat are wonderfully grounded, with the edges between the younger mother-daughter dynamic implicit without obvious dramatic conflict. With an emotional resonance that gives it crossover appeal, even as it sticks to genre and analogy to the very end, this is a gem.