… so of course, Grimmfest is also available online. It’s a Manchester horror film festival and therefore normally out of my range, but it’s all digital this year so I will be dipping in as much as I can (that is, as much as work allows). I am hoping this sets a trend, post-pandemic (although right now, that doesn’t seem a thing) that festivals will be offering both physical and digital options. There has to be money in that, right? (but what do I know?) And as I am not going on holiday this year, these digital film festivals are a welcome simulation. 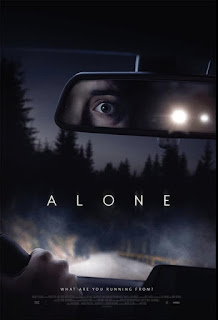 In the Q&A afterwards, there was a lot of talk about duality and so on - "What are you running from?" -  and all that existential stuff is there, but mostly ‘Alone’ is a very decent woman-in-peril-woman-as-survivalist film. It doesn’t waste time: of course that guy is a threat and she’s right to be paranoid. Pleasingly, it doesn’t waste time on the set-up feints that we know. Suffering from overwhelming grief, Jessica sees the world as threatening, and here comes the man to manifest that.

It’s mostly a two hander, but it doesn’t spend too much effort on exposition and dialogue. Jules Willcox as Jessica is another in the ongoing list of excellent performances in horrors that are unapologetically female centred. Her reactions and descent-ascendance into a manic phase are more credible than usual. Mark Menchaca is distinctively average as an everyday guy that happens to be a killer: it’s a performance that makes the disturbing “normalcy” of serial killers believable, how such sociopaths are so convincing – it’s just that she isn’t in the frame of mind to be conned. As it goes on, Menchaca conveys clearly and wordlessly that he, too, is having a bad day. He has one speech about his unforgiving world view, as egotists and nihilists tend to give, but again, there’s a notable lack of serial killer sermonising.

Rather, the film lets the locations and the sombre tone do the talking: the road, the river, the forest, the clearing. There’s some lovely cinematography by Federico Verardi. It’s not original, but it’s well executed, nicely shot and appealing in it’s unfussy, relentless drive into a familiar scenario. 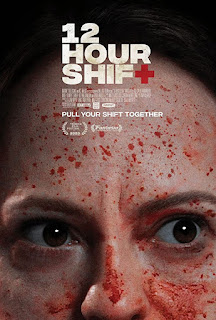