Grimmfest Day 3: "HP Lovecraft's The Deep Ones", "The Unhealer", "The Ideal Host" 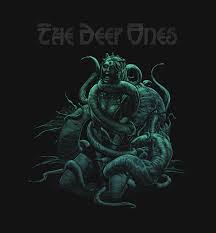 HP LOVECRAFT’S THE DEEP ONES

· Taken from Lovecraft’s Cthulu mythos featuring The Deep Ones, Chads Ferrin’s film is bright and breezy but surprise-free. Of course, having Lovecraft’s name up there will pull ‘em in, and of course there is some tentacle action. It does have a defiantly retro man-in-a-monster-suit that might make some laugh, but I found it more endearing than any CGI effort. Otherwise, a sunny coastal setting, a just-less-than-serious feel and a decent cast make for an enjoyable watch that doesn’t outstay it’ welcome, even if it’s unlikely to leave a real dent. 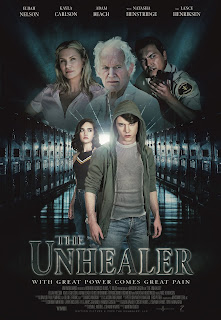 Another bullied kid gets supernatural powers to exact revenge on his relentless tormentors when they go too far. Of course this sub-genre this plays on unfairness, but 'The Unhealer' does so more than just revenge. This is built-in even more obviously when his power is that where they hurt him, they suffer the effects; meaning the extent of the revenge depends upon their brutality to him. But victims can’t catch a break, however cruel the bullies are, supernaturally empowered or not. That’s the bitterest horror and the meanest aftertaste.

Elijah Nelson makes a sympathetic lead in Kelly, the script making consistent use of his eating disorder throughout. And of course, Lance Henrickson makes a mark in his cameo. Moore and Harris’ screenplay is more concerned with the human interest than showcasing the kills, with sadness and unfairness dominating the proceedings. In this way, ‘The Unhealer’ distinguishes itself and lingers more than most. 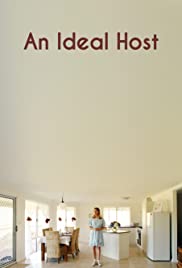 Usually at FrightFest there’s an Antipodean crowd-pleasing genre-comedy that really stands out: ‘Deathgasm’. ‘One Hundred Acres’, Two Heads Creek’, ‘Mega Time Squad’, ‘Turbo Kid’. This is my first time at Grimmfest, and the trend continues with ‘An Ideal Host’, showing again that Australian genre-comedy is just a cut above (or at least, those that we see).

A somewhat precious couple are planning to the minute a dinner party with old friends to stage a marriage proposal, but an old, uninvited and unwanted friend also gate-crashes to upset proceedings. But she’s not the only gate-crasher…

The brevity of the credits reveal how low-budget this is: one location, few cast, director Robert Woods also co-produces, edits, is the cinematographer, etc. But Tyler Jacob Jones’ script and the ensemble cast – mostly from a comedy group Woods is part of, it seems – are consistently lively and funny without over-egging the pudding that any obvious limitations don’t come to mind. (Regarding over-egging: one of my favourite gags is when the film interrupts a cliché montage of the protagonist dressing up to kick-ass with “Enough of that!”).

Like ‘The Special’, there’s a sense that anything might be on the table until it we get some grounding, so there’s some mystery as well as the humour to spike the attention. It even throws in some proper gore. And the effects were all practical too with inventiveness coming thick and fast (the windshield-wipers-as-weapon also a favourite).