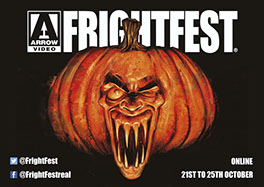 These digital festivals have been much-needed oases in these stay-at-home times, and I am sure there are many others I’ve missed. These digital alternatives have proven great, carrying over some of the party atmosphere still and delivering Zoom interviews that have often been a little untethered from restrictions: I remember the ‘A Ghost Waits’ interview-Zoomchat being a particularly long highlight. I was wondering how the Leicester Square in-person event was going to be successful with all the Covid19 restrictions, and I wouldn’t have gone, but the FrightFest team were forced again to go fully digital. So here we are.

I did get a little confused for a moment, thinking this was a bank holiday weekend – as the August event is – but adjusted quickly. A second full-blown FrightFest this year? Good stuff!

There so many films to choose from this Halloween with a programme that dwarfs the August selection, so I just know I am sure to have made the wrong selection here and there (already regretting I didn’t choose Hayden J. Weal’s ‘Dead’ from the vibe I’m getting), but that’s all part of it. So, you know: let’s see.

Now, I do wish to say that these views are of course my own, and however empirical or critical they may seem, I don’t intend to be mean. Especially when the filmmakers are right there with the FrightFest audience, taking the feedback directly. I am frequently humbled by what a great bunch of people they are. There are plenty of others that got more from ‘Held’ and ‘Sinner’, for example (ref. social media) and that takes precedent over any reservations I may have. So here I am offering criticisms in good faith, just glad to be here.

Traumatised Emma (screenwriter Jane Awbrey) is off with her husband (Bart Johnson) to a secluded house to sort through some relationship kinks. But the house is primed for technological lockdown and pretty soon they are locked in with an ominous, omnipresent voice telling them how to behave as a married couple. …Filmed before lockdown, but there’s extra analogy to it now.

It’s twisty enough (although my early suspicions proved right, so  a gold star for me) and the sound design is great – that’s Brandon Jones, who did ‘A Quiet Place’. Actually, a little campness, a little humour might have served the scenario well to indicate satire and not just peril. It’s the kind of film where she overcomes with a knowing and triumphant smile on her face rather than trauma, topped with a punchline. But it’s well-played and executed, claustrophobic and underpinned by gender-war themes to give it topicality.

Mean-girl revenge pranks at a religious school get out-of-hand and then the dark side of small-town America is revealed, etc. It is intriguing when kidnapping and murder are introduced, and there might have been something interesting by keeping usual slasher inflections off-screen for the most part, thereby focusing on characters; but how much to invest in a bunch of self-obsessed privileged bully-girls? It’s beautifully filmed and nicely played but doesn’t quite overcome some lags (there’s a fully redundant subplot concerning city cops) or an unconvincing showdown that surely belonged to a tackier film. So: almost.