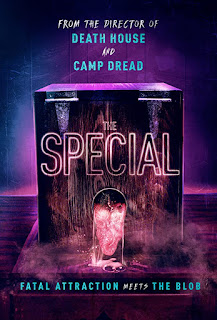 The kind of genre film that goes into streets and corners that those with bigger budgets just don’t. With toxic masculinity firmly in its target sights, it’s starting point is when a guy is persuaded to go to a brothel to get revenge at his wife’s infidelity, and to try “the special”. And then the film runs on the question, “what’s in the box?”

Darkly funny but played straight: it reminded me of Henenlotter films ‘Basket Case’ and ‘Brain Damage’ but not so tongue-in-cheek; or even reminiscent of  early Cronenberg. It deals with monster fetish, sex, addiction, body horror; although, for the most part, it’s quite discreet. Although the suffocation by plastic bag is disturbing. But then, for the finale, it is thoroughly satisfying as it lets loose and rip roars, putting an exclamation mark to all the repugnancy going on. Its targets are well-and-truly skewered. Delightfully absurd, a little rough, and as neatly tied and bundled as tale from an EC comic (As the Grimmfest blurb says). It has that quality of the real deal. Only Horror can do this kind of satire. 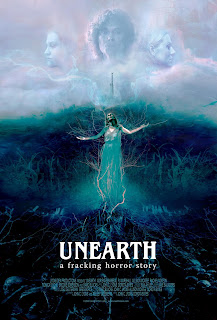 A horror very much rooted in socio-economic concerns of American farming communities. There is much careful contextualising with a great cast – including genre legend Adrienne Barbeau – and a washed-out look to let you know this is serious. So assured is this setting-up that it’s a disappointment that the chaos of the final act, which kicks in a little too late, has a far less certain hand and descends into shaky-cam and close-up incoherence. Although there is plenty of topical dread to be had in the poisoned water due to fracking, and a dissolving baby is truly chilling, but there isn’t quite enough of the genre transcendence to satisfy. For a script so aware of detailing the horrors of making a living, it then goes on to leave so much unspecified and unanswered. Intriguing, but it ends up more a worthy tantalisation. 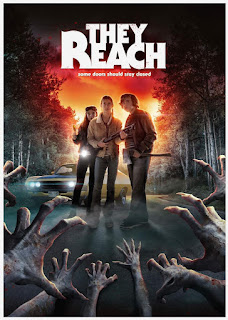 Another retro-horror homage, this time a 70s minor horror vibe. An untypical teenage girl – she’s into robots – unwittingly unleashes demons on her small town by bleeding on a reel-to-reel tape recording of an exorcism. As so often with these things, the kids steal the show in a scenario that leads to things like ‘Stranger Things’. Yep, director Dall cites Stephen King and John Carpenter and ‘The Goonies’ as influences.  There’s the annoying dad, comedy cops, unexpectedly cool librarian, but the adults are the less engaging, because it’s all about the kids. There’s a nice small town backdrop and the retro-feel is nicely done. Strangely (like 'Unearth') it doesn’t seem to play as much as it could with its horror assets – not enough of the demon-kid make-up? Or the demon revealed at the end? But mostly it’s demon-hands in doorways. Likeable horror comfort food.