Glasgow FrightFest: 'Vicious Fun', 'American Badger', 'Out of the World' 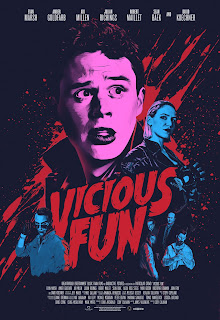 As it says on the label. A horror magazine journalist stumbles accidentally upon a support group for serial killers, and it’s all in-jokes and horror comedy fun from there. These days in the genre, you’re never far from an Eighties setting and the throb of a synth score, and that’s the aesthetic here. It certainly looks good and colourful.  It covers most of the bases of serial killers – even the anti-serial killer serial killer – and, although it is constantly winking to the audience, it never quite becomes obnoxious or overdone.  Evan Walsh’s central performance as Joel the Horror Journalist is the most winkiest of all, always a bit meta: perhaps his almost-obnoxiousness is a gag in itself, but Joel is also definitely a bit Nice Guy; all he needs is a serial killer to point out his dubious ways. And true to the manner of Eighties horror-comedies, it’s a little clunky in places and most of the killers feel a little short-changed in relation to how good the set-up is. But it’s obvious that the film just wants the audience to have a good time, and that counts for a lot. It has good pacing and moves on when one location has been exhausted; there are several good genre gags (“I’m all my stepdaughter has”; killers appearing from nowhere; a summary of the appeal of the horror genre are all favourites); some nice ensemble work; a little industry satire. And the final drive-in coda is a highlight. 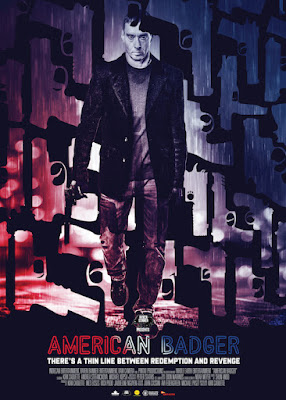 We’re in super-skilled-fighter-saves-sex-worker territory here. But that isn’t quite the whole story. Off-the-grid super-assassin Dean (writer-director-star Kirk Caouette) is meant to seduce Velvet (Andrea Stefancikova) to extract what she knows about the Albanian mob boss she works for and then kill her. But he is solitary and isolated, like an American badger, and inevitably this human interaction gets into him and disrupts the plan.

The tone is lowkey, washed out and downbeat and possibly a bit introspective for some, but it’s more fascinating than, say, Jason Statham’s ‘Redemption/Hummingbird’. Mostly because ‘American Badger’ lets us know very early on that there are going to be great fight scenes, and here are several. Caouette even cuts away from some to follow the story rather than the action. It’s a somewhat hoary premise (three of the eight films I’ve watched at Glasgow Film Festival feature this criminal-man-perhaps-redeemed-by-female: ‘Voice of Silence’, ‘American Badger’ and ‘Out of the World’) but there’s a pleasing fleet-footedness about the pacing, for however downbeat it is, it doesn’t stress one moment too long unless it’s the fights. And it’s those that really stand out, drawing from Caouette’s extensive experience as a stunt man. The capturing of a drab if cluttered world is assured, where call girls are left in poor imitation of Hollywood dreams, where the rooms they and hitmen live in are messy with just rudiments of character, and where clubs and bars are soulless backdrops to fights. There’s a moodiness here and control that shows Cauoette is no perfunctory director either, lifting it up from the average. 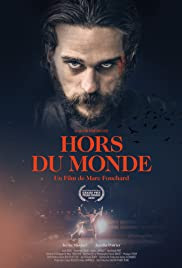 Out of the World

The IMDB synopsis is coy: “A shy man who works as a taxi driver because he can't afford to live as a musician, meets a deaf girl dancer who is attracted to him despite his trouble communicating.” But isn’t so long after our cab driver Leo – a gripping performance by Kévin Mischel – falls for Amélie (Aurélia Poirier) that we’re in ‘The Hours of the Day’, ‘Canibal’ (2013), ‘Henry: portrait of a serial killer’ if not ‘Maniac’ territory here: that is, the humdrum daily routine of killer. He lives and works in his car, but he’s also musician, composing melancholic instrumentals on his laptop of the orchestral kind (it’s good). But as so often happens with film killers, he believes murder is his muse.

Fouchard’s film unfolds at a steady pace and gets increasingly engrossing as the character study deepens. The film stays close to the Leo’s mindset, incorporating interpretive dance as well as his kills – but how many of the kills are real isn’t quite clear, but he’s certainly guilty.  Leo is totally detached and off the grid, unable to socialise normally: dance turns into confrontation and, in an unsettling highlight, he has to hold a woman at knifepoint for dating advice. Leo doesn’t even know how, but Amélie is a mute dancer and these qualities – her disconnect and talent – entice him and gives him the impetus to try. He’s irredeemable – in an imaginary conversation, he doesn’t even let himself off the hook – but his struggle to try and suppress his nature and routine, to learn the gestures of flirting, are disquieting and gripping. He has a hangdog look that belies his murderous nature.

In the end, murdering to make music is just his excuse: both offer a release for feelings he can barely control; sadness through music and rage through killing (he has mummy issues). It conflates artistry with homicidal nature – a trope of the serial killer genre from ‘Color Me Blood Red’ to Norman Bates’ taxidermy and many, many others - but the music is something Leo could be if he could get past the violence. Which he can’t.

Fouchard’s film weaves a dark spell, a sense of the claustrophobia of Leo’s mind and desires. ‘Out of the World’s deliberate pace demands attention and faith, but the journey to inevitable tragedy – where the film is the most Autumnally colourful – becomes riveting. It’s a strong, unforgettable and beguiling entry in the artistic rather than exploitational end of the Day in the Life of a Serial Killer genre. 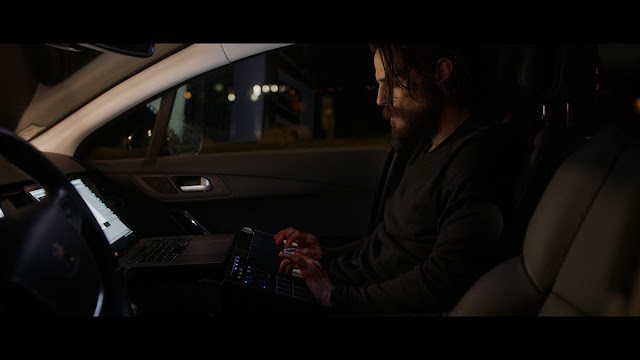