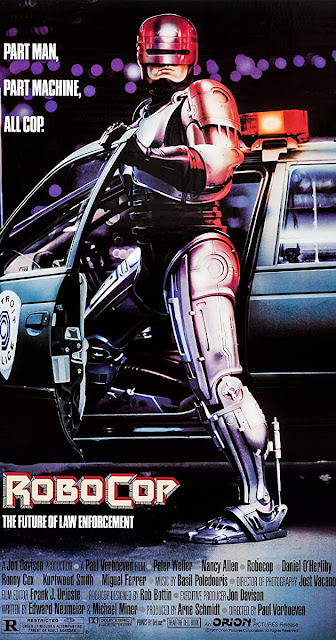 At the time, I was totally wrong about Paul Verhoeven. I misunderstood ‘Total Recall’ and griped at ‘Robocop’ a little too much. I didn’t understand the hyperviolence because I thought, at the time (the Eighties), that Hollywood action films were careless and cynical with it. But Verhoeven was coming from arthouse and exploitation and, when I saw his European films, his American output has since struck me as chuckling on the inside. Their satirical nature is evident, but there seems to me to be a greater mockery, for compared to his European arthouse films, his American output is decidedly comic book, as if this approach itself is a heckle on American cinema. ‘Starship Troopers’, for example, hits the generic beats of American tubthumping action cinema so accurately that many missed the joke. But Verhoeven had this satire and pastiche down to fine art right from the start with ‘Robocop’. And when he returned to European film-making, he returned to the gravitas more, although he proved no less the provocateur with ‘Black Book’ and ‘Elle’. 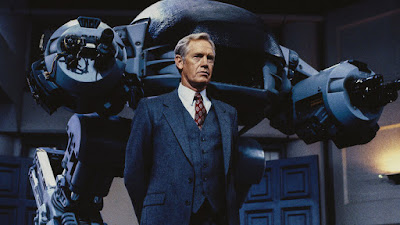 With ‘Robocop’ I remember my main grievance originally was with the ED 209. How, I wondered, would they get something of that size and weight up a skyscraper to the meeting room? Would the floors be reinforced to carry its tremendous weight? Was there an industrial elevator? Did they assemble it up there– and if so, did they have a lab on that floor? And then later: Wouldn’t the Ed 209 be programmed to recognise stairs and not even try to negotiate them? Well, I am less picky now and excuse under “comic book logic”, but the animal noises it makes on occasion that almost tips it into ‘Star Wars’ territory of anthropomorphism still mars it for me, but I can allow for that (you nearly always have to allow for something, depending on your taste). And of course the boardroom scene is a classic and a real shocker in its ultraviolence and cold-blooded black humour.

Basil Poledouris’ music for ‘Robocop’ is exactly the kind of bombast the Eighties action genre was typifying. The look is all steely greys, although the new prints are twinged with a pleasing purple that I don’t recall from seeing it the first time. This traverses similar terrain as Judge Dredd in its portrayal of a futuristic Detriot riddled with a crimewave that needs drastic, violent responses. Although in this scenario, the crime is manufactured and controlled by corruption, by the very same company selling that robot response. Some of the film’s technology might be dated, but the theme that it’s all about corporate corruption and the bottom line is as topical as ever. In fact, it’s vision of cartoonish media and barely recognised venality seems more timely now than ever. A corporate-bought police force? We can see that ever edging closer as a possibility.

It’s all hammered together with a brute force that gives a smooth if blunt edge to any subtleties, presented with a nihilism and assurance typical of exploitation. And it has that pulp thing of when a man is crossed with technology, the humanity will always rise to the surface. In fact, it’s implied that will make him a better Robocop, even if he seems to have been perfectly efficient beforehand, dispassionately mowing down bad guys after he has given sufficient warning. However, this also implies a moral centre to the mechanical. Peter Weller’s physicality and movement as Robocop is a wonderfully realised and convincing blend of jerkiness and mechanical authority (his physicality made his performance in ‘Naked Lunch’ a favourite of mine from the era). 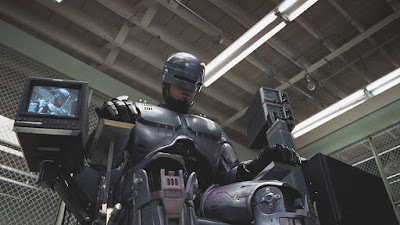 As ‘Robocop’ never quite takes it eye off the black humour, it never quite becomes what it is satirising. Even down to Robocop getting the final line like a TV detective nod to the camera: not quite a punchline but serving a similar service into the credits. But it also offers: the ultraviolence (a bonus melting man too); the parody of news where devastating news is served with as much earnestness, flippancy and time as commercials; and the flirtation with vigilante justice (action movies just love it when cops go vigilante; sure, he’s a robot cop, but he’s exciting the same vengeance sensibilities as ‘Death Wish’ and ‘The Punisher’).

If you want to see what this could have been without the ferocious satire, just look at ‘Robocop2’ (a film that fascinated me for its chill and ruthlessness. I’ll admit), which feels far more perfunctory.  In fact, none of the sequel or cartoons quite captured that unique edge and balance of the original. Certainly, one could imagine Edward Neumeier and Michael Miner's script done without any of the wit. Verhoeven’s film now seems prescient. The blunt force and black humour has made ‘Robocop’ a lasting classic, a cult favourite. 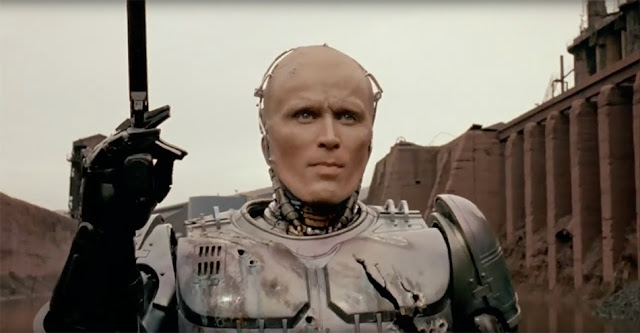