I Care A Lot 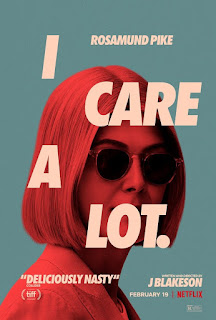 Starts with one of those narrations where the protagonist-villain is spouting that sociopathic bullshit about people being one of two types, predators or victims. Yeah. She’s a “shark”. But it’s unnecessary, as so many narrations are, because we can see immediately what kind of woman Marla Grayson (Rosamand Pike is). She’s scamming the legal system into putting elderly people into her care homes, enabling her to fleece them of their homes and money.

But then she plays her trick on the wrong old timer (a game but somewhat side-lined Dianne Wiest), whose son (a constantly stewing Peter Dinklage) is also a reprehensible gangland criminal. Mark Kermode says that the film plays with allegiances, but never once did I root for Grayson. What we are left with is knowing that, whatever happens, the bad guys will win. And they do.

The stipulation that a fiction’s protagonist should be “likeable” is, of course, absurd. What they must be is interesting and even, you know, complex. ‘I Care a Lot’ truly pushes that to its limit, because there really isn’t anyone to root for. Of course, it helps that there’s Rosamind Pike whose superficial smile is the stuff of nightmares, giving a sexy authority to her moral vacuity. And there’s Peter Dinklage, where you can feel the gears grinding beneath the surface. Both are brilliant turns. But what you need is an interesting plot if are at odds with the characters, dialogue and twists and turns, and the film has that enough. But what we also have is a plot that hinges upon henchmen not checking their victim has drowned and being unaware that they are being obviously tailed all night, it seems. 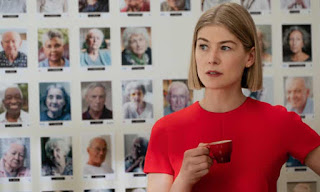 But the fact that ‘I Care a Lot’ doesn’t ask for your empathy for its protagonists no doubt contributes to the strength of negative reactions on Amazon commets: “Stupid movie” and “Waste of talent”, that kind of thing. But ‘I Care a Lot’ isn’t that, of course: Blakeson does what he sets out to do, and it’s stylish, well written and paced and always interesting. It’s certainly divisive and frutsrating. The second half moves into a thriller scenario and there is also a hint of the heightened reality here, so perhaps the bleakness and cruelty obscures the playfulness. It feels like it’s in the same semi-absurdist world as, say, Soderberg’s ‘Unsane’. For example, the credibility of Grayson’s scam might be an issue, if you know how courtrooms work, etc. It’s Grayon’s girlfriend (Eiza Gonzáles) who provides a hint of vulnerability and humanity, although this isn’t the would-be tragic tale of how she got swept away by a sociopath. Grayson is such a towering larger-than-life presence that it almost obfuscates the culpability of her enablers.

The final narrative note is a balm because the bad guys triumphing so big is perhaps too much to take for an audience, and films are there to see comeuppance given. But we know bad guys get away with it all the time, heading corporations, corruption, dodgy pasts, becoming president, etc. So that is perhaps the message that hangs: that we are run by crooks. And anyway, she philosophically wins because she had already stated fiercely, under duress, what she thinks of this outcome. 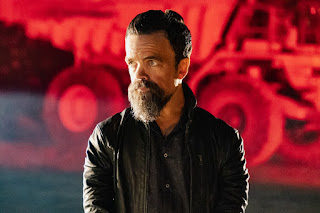