Another House of Wax (World of Remakes #2) 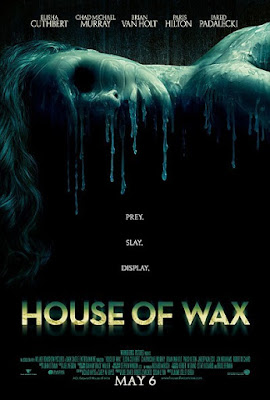 "The House of Wax" seems an ideal example of how a horror remake that simultaneously cashes-in and updates a respected original can reveal the best and worst of contemporary ‘re-imaginings’. The originals ("House of Wax 1953 is a remake of 1933's "Mystery of the Wax Museum") are delightful Gothic chillers with an irresistible promise and, in one example, Vincent Price. Full of theatrical, garish and ghoulish flourishes, earlier versions were never exemplary of Classic with the capitalised "c", but simply possessed of a highly appealing horror premise, Old School charm and a good set-piece or two.

Immediately, in just invoking Price’s name, a key difference in the old and the new flares up: modern horror does not have the same cache of horror stars such as Lugosi, Karloff, The Chaneys, Christopher Lee and Peter Cushing It’s in the casting that we find the conflict in the "House of Wax" remake [1]. It feels like two films competing against one another: one is a contemporised rural Gothic with lashings of Twenty-First Century graphic cruelty plus a glorious topping of surrealism; the other is one of those Teen Horrors (well, twentysomething) that seem dictated by the production company to draw in the demographic they imagine make up the horror audience. The audience who’ll apparently only come to see pretty young things talk dirty and get killed by something monstrous. 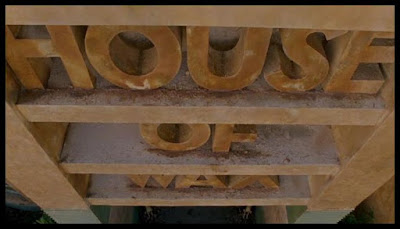 And so it is that we begin with an arresting opening that feels more like Tim Burton on a particularly nasty day - a dinnertime in which one of two brothers is strapped savagely into a chair, all to slightly edgy if not jaunty editing - which then gives way to generic soft metal and a bunch of bratty and bitching young Americans. They all fit their stereotype, their dramas are soooo day-time soap and sure enough, the chaste girl is going to be the Final Girl of sorts, the loved-up black guy and the slutty one (some stunt-casting with Paris Hilton) will do some bumping-and-grinding and the delinquent… well, he is not the obnoxious, crass type, but rather the misunderstood type. This means he will be redeemed. Herein lies the most original feature of the drama, for "House of Wax" is about sibling love rather than romance. It is not in any way revelatory - some generalised stuff about there always being a ‘good’ sibling and a ‘bad’ sibling - but it does make a change after the bland amorous pairings at the core of so many standard horrors. Otherwise, it is simply an undistinguished cast borrowed from a long line of tedious slashers and High School flicks and is probably responsible for what makes "House of Wax" so superficially banal.

But when it steers into a mixture of "Texas Chainsaw Massacre" (1974) and waxy surrealism, it quite excels. Jeune Collet-Serra directly fluidly and fluently with fine sense of establishing geography and showing off the wonderful set design details. "House of Wax" throws up a number of far-fetched but gleeful conceits and spikes them with a decidedly modern focus on body horror, all culminating in the unapologetically contrived separation by knife of wax twins. Indeed, you can almost hear someone looking to remake the originals - and actually, they probably did not refer to the originals at all - and saying "Hey, what about if the house is, you know, actually made of wax?" And this paves way for the deliriously surreal denouement of the final chase in a melting building. For this little wonder, it wins over its flaws. In fact, nearly all its weaknesses can be forgiven for the exemplary set design, the lovingly grungy detail, the ending, plus another great otherworldly scene: a cinema of wax dummies watching "Whatever Happened To Baby Jane?" (1962)These unforgettable set-pieces and the full-on joy the film-makers have with wax, both on a grand and small scale, make this a minor surrealist horror treat, and all that tired and humourless teen-slasher stuff is jus 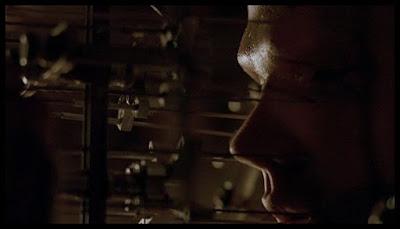 t weak scaffolding.
*
1 - The only potential crossover star I can think up is Robert England, and he is hardly a household name in quite the same way. Anthony Hopkins as Hannibal Lecktor, possibly, but he has hardly earned his crust by affiliating himself with horror. 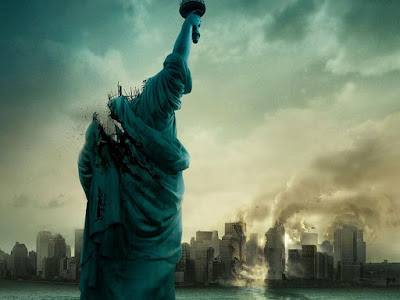 
The problems with the "Cloverfield" hand-held execution are evident from the outset. We’re all accustomed to amateur shaky-cam (we’re all filmmakers now!), but as with any medium, it takes real skill to create something fluid and new from such a volatile familiar technique. Some of the action is carefully orchestrated with the natural motion; at other times it becomes absurd, as our cameraman diligently continues to record whilst being attacked by smaller creatures (Hit it with the camera! Hit it with the camera!!), or climbing from one falling building to another. What is/was new with "Cloverfield" was the concept of viewing a mega-budget monster flick through the eyes of YouTube. It half works. First-person ground zero perspective is a delicate balance, but this is not as successful as ".Rec" (2007) or (yes, of course) "The Blair Witch Project" (1999). You can look to "28 Weeks Later" (2007) as an excellent example of mobile but not hand-held camera, which probably would have reaped a more convincing ground zero perspective for "Cloverfield". And, of course, the camera has an excellent microphone, what with all the stereo and depth of bass.

Nevertheless, this is in no way as crippling as the human drama on offer. Some shallow love-friction provides the impetus for our vanilla Manhattanites to go back into the war zone, to rescue a loved one. Brandon Colvin gives a fine defence of both the digicam aesthetic and the romantic narrative arc, which he argues for most convincingly. Its title "Epically Personal" indicating how he feels the minor-to-major perspective works well (and please do read). But when actually listening to their interaction and love-before-monsters philosophy, these characters really are not the supposedly average people we can empathise with: they are cut-outs taken from a soap opera A-to-B manual. Colvin rightly sees the monster as the embodiment of our hero’s anxieties about his move to Japan and his break-up with a woman he loves. And surely the monster is also her repressed rage at his abandoning her, tearing down the city to prevent his leaving. Pity about the hokey dialogue. More interesting is the cameraman (also requisite comic relief) and his unrequited love for the girl at the party, but this is never allowed to take off, even though they are more intriguing and quirky characters. I am not persuaded by the human commotion element: it is like a particularly smug and asinine TV drama about successful but emotionally cliché New Yorkers is suddenly interrupted by a "Godzilla" rip-off. In itself, this ought to be (if you’ll forgive me) awesome, but you need better dialogue and actual character charisma than Drew Goddard's script offers. Rather, it feels like a tale of how the Cappuccino crowd, having modelled themselves heroically on constant re-runs of "Friends" but without the gags, simply won’t let a little thing like gigantic monsters running amok stand in the way of love, but the kind of love you see in commercials rather than the actual engaging stuff.
But: what a "Godzilla" homage. The famous "Cloverfield" promotional campaign was a brilliant tease. A party of happy Americans is interrupted by a full Dolby-trembling roar from the distance. Chills go up the spine. This might have been a seminal monster movie, as rendered by the little people running around its toes, shaking with its every footstep, fleeing from falling buildings. And there is plenty of that. News broadcasts hint at what’s to come. Then the first brief appearance and the falling head of the Statue of Liberty, followed by a run for cover in a store in a fog of dust and dirt is spectacular and thrilling. This is what we came to see!! The attack on the bridge is perhaps even more spectacular and unique in putting us right there during monster mayhem. The glimpses near and far of the thing are both revealing and teasing enough to get an creature feature fan trembling with joy. If you love monster movies, how can you not celebrate these moments? They come close to a totally new perspective… close. I am reminded of the brilliant alien invasion pictures of Charlie White.
A moment of respite taking refuge in the subway is a smart move, keeping us firmly under but aside from the action, felt only by the trembling earth. This bunker-perspective re-captures the best element of Shyamalan’s "Signs" (2002), where you can think Yes, this is how we would experience this. A tunnel attack, whilst frightening, is perhaps where things start to lose a cast-iron grip and we have to start making allowances - which can be done happily for the most part - to let it get on with what it is doing. Rushing through military camps and battle zones strain credibility, as cleverly as they may be choreographed, and by the time we come to the helicopter, after a wonderful aerial monster-shot, plausibility just gets thrown aside. So, suddenly, the camera looks up and sees the monster, and no one heard it coming? You know, no stomping and trembling earth? Did no one care enough to follow details to the very end? Why have an aesthetic that purports allegiance to first-person credibility and then throw logic and plausibility out the window when it suits?
JJ Abrams has a real fan boy love for genre, and enough pop culture savvy to play with the conventions to liven things up. But those same pop motifs often have him making do with the obvious and superficially cool; when he is called on for truly innovative dramatics and closure, he can’t quite deliver. This then is why the human drama has all the depth of weak R’n’B love songs. But in closing, when the fears of separation and failure in the "Cloverfield" couple’s relationship finally comes to overwhelm them, there is almost a genuine emotional kick come the end. Almost.
But the monster stuff is great.
Posted by Buck Theorem at 8/09/2009 No comments: