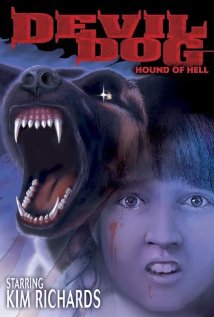 
DOG OWNERS! Does your non-Caucasian maid clutch her cross when she sees your new puppy? Over time, do your children become giggly, distant and callous? Does your wife suddenly become one half ice-maiden, one half seductress? Do you sense EVIL behind your pet’s furry, indifferent visage? Then, unfortunate owner, you may well be the owner of … a DEVIL DOG!


Director Curtis Harrington felt that “Devil Dog” was ridiculous from the start, and so it is. But Harrington has no understanding of the genre or the material; he is straightforward TV-style director and has no imagination to know that the trick of horror is to embrace the absurd. If done successfully, this can turn the preposterous into something genuinely scary, black-humoured, even satirical and transcendent - like “The Omen” and “The Exorcist”, the evident inspirations for below-par fare such as this. A demonic dog that possesses a household could be fine satire on bourgeois and/or suburban mores, but we do not get any of this. The handsome dog generally looks cute. The characters are bland stock types, with Kim Richards obviously far too old to play a ten year-old; and she isn’t the only special effect that doesn’t work. Notoriously, the revelation of the devil dog’s true form is bad stuff and badly filmed. Unintentional hilarity abounds.


The film is more successful, if at all, in small moments when the kids grow increasingly alien to the parents, giggling secretly, dashing off and behaving detached from adult affection and authority. Perhaps the most genuine creepy scene is when the father (Richard Crenna) heads up into the attic only to find that his family are indulging in black magic. This inherent uneasiness of this moment hints at what might have been.


Why on earth would The Devil Himself want a pedigree dog raped to spawn evil pups that… well, that just go into a family and cause trouble? Is this spawned by the hubris of a Christian suburban family, thinking That the Devil is directly interested in them and will always infiltrate in some way, even through cute puppies? What on earth do the forces of Evil hope to achieve? I can only venture that they want to start early on the son, who enters school politics and, inevitably, appears to be using nasty means to achieve success. But if the kid is meant to rise to Damien Thorn levels of power, it isn’t clear, and starting in some undistinguished family and suburban school does look like the forces of Evil are taking a longshot.


More fun and interesting is reading the narrative as the insanity of the father. You see, it is actually him that is doing the killing, suffering from paranoid delusions about his family and pet. It’s all in his head! There is even a hint from an incidental television news report which states a man went on a killing spree and said his dog told him too. But this is not the film to tease out such ambiguous possibilities. Rather, it achieves that so-bad-it's-good accolades in both bad-horror and bad-TVmovie camps, so it certainly isn't without charm.
Posted by Buck Theorem at 4/01/2013 No comments: 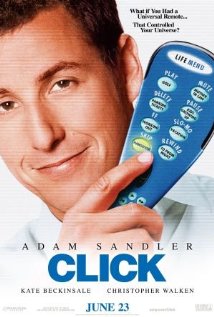 All American Man-child Asshole – Adam Sandler! – chasing the All-American dream of climbing the corporate ladder to ridiculous wealth gets a supernatural visit that endows him with a remote control that, um, can control his universe. Ooh,  manchild dads are great when they bring gifts home, but bad when work means they have no family time, etc etc. Like much of this mainstream Hollywood piffle, it conveys America’s confused desires for both money and some supernatural intervention in order to have it all. And fart gags.
Fat is funny. Sex-changes are funny. Dog shagging is funny (well...). And then it’s all a dream and highly insulting, leaving nothing but another film with a false happy ending (shouldn’t he lose his job? Wasn’t that why he couldn’t go on a family holiday in the first place?), made up of crass emotional, superficial and personal social criticism (it’s pretty much all your own fault) and the bottom line is that we need even better gizmos to make the world work for our own interests. Oh, and supernatural interventions to make us better people … or something.
Posted by Buck Theorem at 4/01/2013 No comments: