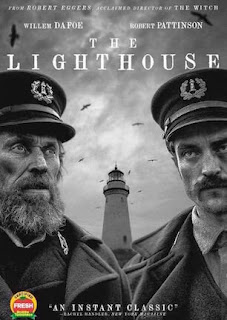 Robert Eggers’ ‘The Witch’ was gripping in its use of period detail and accuracy, the kind the that reached for authentic period dialogue to the degree that it might alienate many. There was the feeling that Eggers really wasn’t inclined to compromise in rendering a believable period piece that truly tried to get to the delusion and mania of the phenomenon of witches (and all without recourse to clanging dominant misogyny).

If anything, Eggers’ follow-up ‘The Lighthouse’ is even less commercial. It’s a black comedy with farts about a couple of men going mad in a phallic symbol (derived from Eggers’ own description, according to Defoe*). There is a continued sense of uncompromisingly capturing the fall into delusion and madness, with the imagery of mythology being one of its outpourings. Two films to his resume and Eggers has approach this cornered. 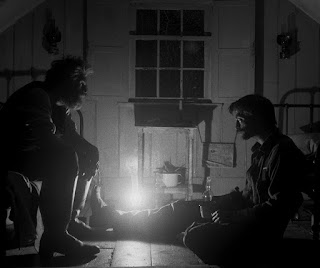 Jarin Blaschke’s cinematography isn’t afraid of the oily darkness, of the dense blacks as the camera peers down and slides around claustrophobic interiors, with the exteriors giving precious relief hemmed in by the storm as they are. The footage of storms and waves are startling and violent: some of the scariest put to screen. The 1.19 aspect ratio boxes in everything, claustrophobia being the agenda. And Defoe also mentions “old filters”, and that they built the working lighthouse for the film*, that he had fake teeth**, giving this as much a feel of impressively being as hand-built and utilising old techniques similar as Mark Jenkin’s ‘Bait’. It even reminded me a little of the tone of Phil Mulloy’s animation that feels built on something unpleasant.

On top of this is the remarkable sound design by Mariusz Glabinski and Damien Volpe. It’s one of foghorns and constantly abrasive noise, and seemingly in contest with Mark Korven’s soundtrack as the score tries to scream, drone and scratch its way onto the picture. In this way, it reminded me of Mica Levi’s score for ‘Monos’. It’s a film that rewards being on the loudest sound system possible. 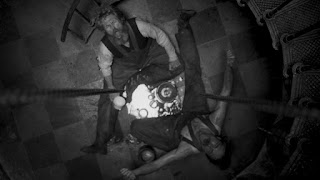 ‘The Lighthouse’ is a chamber piece, a two-man show. Willem Defoe says that after seeing ‘The Witch’, he sought out and befriended Eggers which led to this role. Defoe is Thomas Wake, wearing a beard as thick as his vernacular: cranky, quick to temper, a bully, a storyteller (or liar?), but often looking like a wounded animal, baffled by himself. One can see him being a lovable if infuriating grouch. And if Defoe tells more of his character with his eyes, Robert Pattinson as Ephraim Winslow seems to be acting with his mouth, using it to its full range. It’s another fascinating Pattinson performance, and even if Defoe has the showier role Pattinson has the arc. The speechifying is often both impenetrable and glorious (you may want to watch it with subtitles when you get the blu-ray/DVD), with Defoe fully relishing the monologues flavoured by 19th Century patois. Wake is as outspoken and thin-skinned as Winslow is introvert and seething. And then, they seem to be speaking one another’s dialogue with perceptions starting to get murky and surreal. At points, it even threatens to turn into a monster movie.

It's being sold as a horror, because how else to sell it? But as reductive as that may be, one can see and feel that the mood, the pervading dread and the descent into more-and-more craziness is indicative of that genre, and certainly a horror audience is more likely to be attuned to its tricks and nature. Defoe sees it as a mixture of Bergman, Tarkovsky and Hitchcock* – the greats, then. He says, 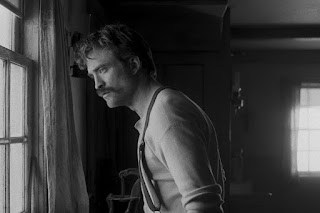 “It’s a struggle about signing on to a certain belief system or a certain way to live. That’s where the antagonism starts. It’s not just a boss and his charge, or an apprentice and a master. It runs a little deeper than that for me. The thing about it is that it’s such a simple story, but the relationship and the strategies these characters have to survive are so complex that different people see different things, because they bring their own stuff to it. There’s something so elemental about the story.”**

‘The Lighthouse’ is certainly unique and daring and all-the-more rewarding for that. It’s a mystery that serves all the themes and theories to you might throw at it, being about machismo, madness, isolation, alienation, man-versus-the-elements, bad work conditions, etc. Simran Hans accuses it of “frat boy humour dressed up in an expensive, arthouse jacket”, but this is surely more part of the theme of male crudity. And with seagulls. It’s a film with a large seagull crew, too. It’s quite the accomplishment that only adds more evidence that Eggers is proving distinctive and someone to always watch.

And it’s often as dryly funny as it is surreal, lest I forget to mention that. 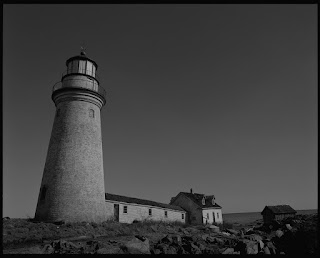 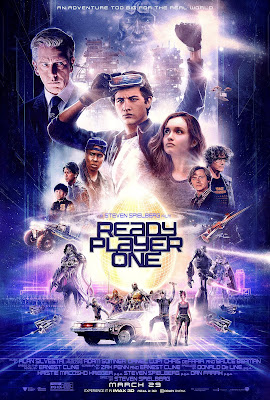 A towering bore of empty effects work and fanboy fantasy. I mean, it’s distracting because by nature immense effects work usually is, but… Even ‘Star Wars’ transcends it juvenility with its original detail, if not its plots and themes; and even Tarantino grounds his magpie sensibility and movie-movies with distinctive casting and a recognisable voice. Although ‘Ready Player One’ is directed by heralded maestro Steven Spielberg it’s really the most generic, anonymous epic effects! direction: the camera swoops and sweeps, taking in all we are meant to be impressed by, but it signifies nothing. It speeds through and keeps on the move as if scared that if it slows down there will be nothing to hold it aloft. 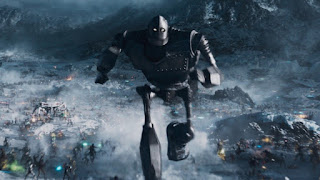 It's that “Chosen One” thing, opening exposition narration, “These days, reality’s a bummer”, etc: Tye Sheridan as Wade/Parzival is appealing enough but this isn’t the place to show what you’re capable of; although evil corporate guy Ben Mendelsohn will always make some kind of dent. I started thinking that rarely has a film broadcast and signposted its own immaturity so insistently.  We are witness to a nerd’s egomania that - in this future(?) – it’s 2045, apparently, so what’s all this 80s nostalgia? So: alternative(?) reality – is the basis of all the imaginations around him – they idolise him! But, dead as he is, he posthumously insists on this unreality being tethered to the pop-culture of his youth. So, this is future amazement landlocked to one man’s youthful obsessions (he symbolically keeps his silent kid self around because *shrug*). All around is a state of arrested development: Here are riddles solved by a grown man’s fear of kissing the opposite sex; riddles solved by going backwards (gosh, the symbolism!); proof of authenticity relies upon knowing about John Hughes and other mainstream 80s teen-movie fluff. 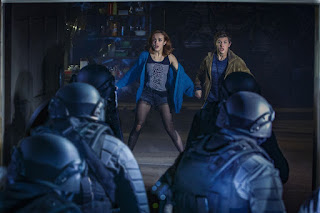 Speaking of which: the love interest (Olivia Cooke) is a feisty action-girl who is tediously cocky at first, who is characterised a little with a prominent birthmark, just to make her, you know, a tortured soul - but it’s okay: she can cover it with her flirty fringe. And it’s notable how she loses her individuality and voice more and more until our hero asserts that he's ready to embark on romance with her, to which she says nothing. I guess she was just waiting for a dominant male?

And this seems to maintain the objections and negative responses to Ernest Cline’s source novel, which I haven’t read but are covered here by Constance Grady. It would seem Easter Egging for Geeks isn’t my sense of thing.

It’s like a fanboy fantasy totally unleashed and warping reality. Here, let me show you how I can turn ‘The Shining’ into a cool computer game! Actually, ‘The Shining’ sequence is perhaps the most awake in the film, in that imagination is demanded to utilise it. But it’s still co-opting the cool of a classic. It’s one giant Easter Egg, and it’s meant to be. There’s King Kong, Rubik’s Cube, the Iron Giant, Mecha-Godzilla, Chucky (?), ‘Krull’ and… I am not familiar with the hardware but I assume that’s namechecking games…  it goes on and on. 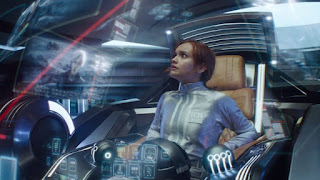 And then Wade and his mates rule the world’s imagination, but benignly and fairly, so that’s nice.

Perhaps it’s the cinematic equivalent of one of those chocolate egg cash-ins/tie-ins offering a disposable toy inside?
Posted by Buck Theorem at 2/06/2020 No comments: