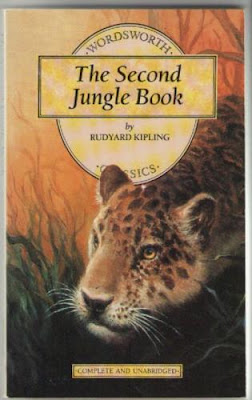 
Much of the superficial reputation of Kipling’s “The Jungle Books” is surely down to the Disney adaptation, but Disney could not be further from the source material. The books carry the taste of genuine fables, the kind that came from the fireside tradition and bedtime stories. Firstly, they are not all based around Mowgli; secondly, Mowgli himself is not the cutesy Disney imp one might expect to meet; he is proud and defiant, a killer of enemies and as philosophical as any other of the jungle animals. And these books, like so many true classics ostensibly considered children’s books, are not childish. Kipling’s “Just So Stories” may feel to be and are directed at the young reader/listener, but “The Jungle Books” are denser, less whimsical and more fascinating and complete.
Kipling does not routinely rely upon action to guide his story, but rather rumination on nature, man and violence as spoken through the man-cub and the jungle animals. Many of the stories that comprise the Jungle Books are conversation pieces: animals and characters sitting around negotiating, discussing, telling stories. “The Undertakers”, for example, is founded on a conversation between a pelican, a crocodile and a wolf, talking about eating and hunting: what emerges is a stark and unsentimental contemplation on the food chain. Although “Letting in the Jungle” seems as if it will build up to a chase narrative - wherein Mowgli will help the white couple that adopted him in earlier stories to escape from a town that believes Mowgli to be a werewolf of sorts, and therefore making the couple witches by association - Kipling rather allows conversations to mark the story and all the action to be told seemingly in that retrospective manner of the storyteller. Kipling is a natural storyteller whose prose and dialogue all serve vividly to depict events and conflict and contemplation.
.
Accusations of colonialist mentality and racism have long dogged Kipling’s reputation, and perhaps mostly due to “The White Man’s Burden”. However, The Jungle Books and Kim all exhibit a far more interesting and nuanced depiction of race relations: the eponymous hero of his novel “Kim” is a white boy, but Kim is culturally and psychologically an Indian native. Likewise, Mowgli is of man, and yet is fluent in jungle (animal) talk and finds no place with society other than the jungle animals. Both boys are hybrids of culture and identity and both straddle the divide with great confidence and pride. Kipling was himself much like Kim in that he grew up in India before being brought to England for an education, and the friction and fascination of holding a dual identity is strong throughout these texts. It even extends to the tale of “The Miracle of Purun Bhagat” wherein Purun Bhagat flows across the caste system from being prime minister to pauper to holy man across his lifetime.

Also notable is the portrayal of the animal kingdom as one big jungle democracy: “How Fear Came” has the animals congregate to discuss the upholding of their laws and hierarchy, for the sake of all-round harmony; and “The Law of the Jungle” details some of these in verse form. The latter also details the differences between each class and nature animals. The impression is of an analogy for international entities such as The United Nations, of diplomatic negotiations and respect for various and differing cultures and identities committing to the good of all. Many of Kipling’s protagonists are multicultural and swap castes and class comfortably. This is surely where Kipling’s true sentiment and vision lay, for his text repeatedly and lovingly investigate such transient identities. It is perhaps then inevitable that Kipling himself such a contrary character: as Peter Levi says in his introduction to “Just So Stories”: “I like his criticism of England, which was ceaseless, though I have also been told that he wrote the radio speeches of King George V.”*

His tales attack the artifice of the class system and respecting the many ways people live, and how identity is fluid depending upon environment. “Stalky and Co.” satirising and criticises the artifice of English boarding school educations, its chief success being the story “The ---” which condemns the educating of young men into soldiers. In The Jungle Books, it is true that man is the greatest threat to the jungle kingdom, but Kipling also vilifies unnecessary aggression (the animals the break the jungle laws) and deceit; for example, it is the fact that in “The King Ankus” the White Cobra lies to lure Mowgli into his den, and it is a jewel-studded sacrificial knife that represents all the murderous greed of mankind. The following two stories in “The Second Jungle Book”, however, do feature action sequences that put the reader into the thick of it.
.
Kipling’s fascination with cultures is absorbing. “Quiquern” details the lifestyle of an Inuit boy and his dogs in a thorough, straightforward style, and with respect to the merciless nature of the elements that feels similar to Jack London’s “The Call of the Wild” and “White Fang”: in this story, the dogs do not talk. London alternates from such realism-based tales to the fables of Mowgli and his anthropomorphic jungle folk with ease. They may differ and vary, but their interest in society and different races/classes/species and the outsider characters that move through them unites the two parallel veins of storytelling. It is also this interest that keeps the talking animal strain of tales from the more fantastical flourishes of the fairy-tale: they remain fables. Indeed, the image of the eight-legged and two headed monster wolf has a nice explanation.
.
With “Red Dog”, Mowgli’s story starts to winding down and the wolf pack that brought him up is coming to an end. They go out in a blaze of glory, seeing off a brutal pack of invading dholes. Mowgli’s Jungle, it seems, is not to be overrun and plundered by violent intruders who think it is theirs for the taking. The wisdom of the elders and the defiance of the young are more than a match for the great dhole rampage. It is a subtle enough anti-colonialism allegory. The final Jungle Book story, ---, is a melancholy affair with Mowgli all of seventeen years of age and although at the peak of his powers, no longer at the peak of his legendary status throughout the Jungle people. Dissatisfaction runs through him and he feels the pull of man and their civilisation. Man will always go to man, the animals have told him, and this troubles him but the problem of dual identities prove ongoing. What kind of existence and character could Mowgli achieve amongst mankind, where he will be as freakish and problematic as, say, Tarzan The Ape Man or Victor “The Wild Child”? But we are only left to imagine that, for Mowgli and his animal peers have already served their purpose in providing wonderful tales and criticism of civilisation.
~~~~~~
* Peter Levi, February 1986, introduction to: Rudyard Kipling, “Just So Stories”, Penguin Classics, 2000, pg. 8
Posted by Buck Theorem at 2/06/2011 No comments: