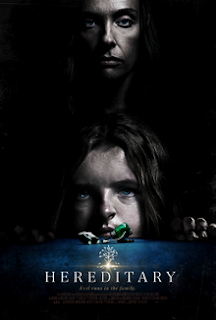 Of course, the blurb that’s it’s a modern ‘The Shining’, or ‘The Exorcist’ or whatever isn’t helpful at all and rather silly. How can a piece survive on its own with that kind of baggage? But it’s an exemplary entry in the Horror trend towards the slow burn, the more abstract; the kind offered by contemporary favourites like, yes, ‘The Babadook’, ‘It Follows’, ‘The Witch’, ‘A Girl Walks Home at Night Alone’, etc. The kind that Brett Easton Ellis doesn’t really like – despite himself being responsible for a fine example of art horror – and the kind that is likely to provoke those that like their genre less  obviously existential and  more schlocky and jumpy into boredom. But it does have jumps – well, it made the women along the aisle from me jump out of their noisy popcorn; and from reading and hearing comments from others it does seem to offer enough for the crowd for whom ‘The Conjuring’ represents horror. 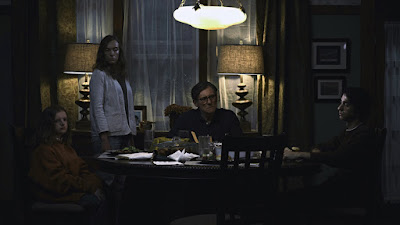 A family mired by grief over their unknowable Grandmother’s death starts experiencing an uneasiness that is more down to unspoken and unexpressed feelings than anything supernatural. This is where it is evident that this particular strain of horror benefits from demands for superior acting and ‘Hereditary’ certainly offers that. Toni Collette as the troubled and turbulent mother Annie, Alex Wolff as her suppressed and traumatised son (and Wolff can hold a lingering close-up) and Gabriel Byrne as the somewhat bemused and mild voice of normality are all exceptional. The dioramas Annie makes offer a lot of opportunities for surrealism that the film doesn’t dwell upon or much utilises for hints, scares or expression. Rather, these dioramas can be seen as part of her attempt to control as well as replicate her environment, but this too is vulnerable as hinted at by the opening unseen and omnipotent force gliding into the diorama of their domestic life via the camera (the artform of dioramas is infiltrated by the artform of horror). 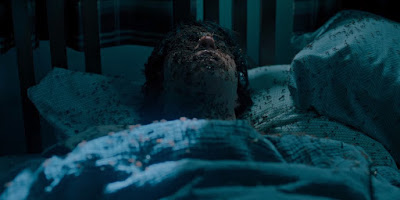 And then there is the car accident. The build-up, execution and aftermath are so exceptionally well done that, for a moment, the film is pushed into something special (and it’s certainly one of my scenes of the year). The fact the film lingers on the shock until it blossoms into full grief stricken horror is masterful. So it is true that, afterwards, the steering into the kind of comfortable tropes that the first half has hinted at but avoided is where much of the disappointment from audiences surely stems. Here’s a mat as a clue; here’s a book of photographs to explain it all; here’s a voiceover, etc. Films such as ‘It Comes at Night’ and ‘The Witch’ – hell, even ‘The Shining’ – have surely proven that explanation isn’t really needed when so much else is working and – just like the Infomercial of Exposition in ‘Get Out’ – ‘Hereditary’s obviousness in the latter stages can only cause weakness and dissatisfaction, even if it does reach for satire and conspiracy theories.  But it does succeed as a tale of a family crumbling into more and more horror, where the very opening glide into a diorama points both to the artifice of storytelling and an omnipotent external force diving in to tear them apart. But right to the end, there’s enough twists, slight-of-hand and outstanding detail (such as the truly haunting and horrible disembodied head; or the fact that it’s not THAT on the ceiling you need to worry about but – as the camera pans – it’s something over THERE) to make this a little special; hence the hyperbole. The execution outweighs its weaknesses. 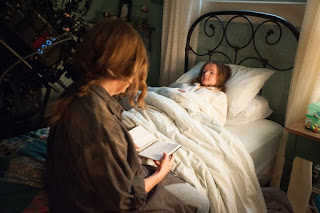 Its kindred spirits are ‘Rosemary’s Baby’ but also ‘Kill List’ where it becomes “actually you're watching THIS film”. But the film doesn’t have the conviction to follow through with the abstractions and ambiguities like ‘The Witch’ and ‘It Comes at Night’ and is ultimately happy to be something far more recognisable and more conventional. I certainly didn’t feel the same depth of disappointment that some have felt – because perhaps tropes don’t trouble me as much – but by the end neither did I feel it was ultimately quite as outstanding as it might have been, despite its frequent moments of brilliance.

One moment in: 'Raiders of the Lost Ark' and 'Jaws' 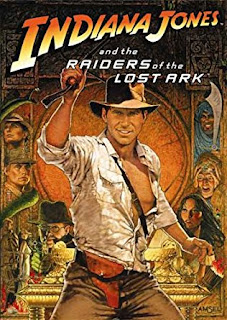 I assume now that every pre-teen thinks ‘Nightmare on Elm Street’ is a bit old hat and has seen the ‘Hatchet’ films at a sleepover, but when I was a kid it was hard to see contemporary horror. I always credit ‘Raiders of the Lost Ark’ as giving me my first “gore scene”. Of course, I mean the face melt of the Nazis at the opening of the Ark. No, I had never seen anything quite like that beforehand – maybe stills from ‘The First Man into Space’ in all his goopy glory that I had in a monster book came close (but I wouldn’t see that until much later). But here was a graphic melting face in all its bloody liquefying glory. All the credentials for a gore scene: just there because it could; graphic because it could be; a little outrageous; a moment to wrench and make you go “Wha? Oh –!!! Blegghhhh!” - but not necessarily in that order. And the hint that maybe you are watching something you shouldn’t. 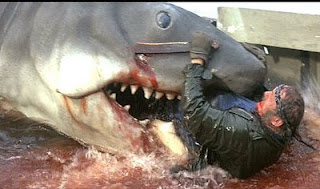 Of course, now I am thinking that it was notable what Spielberg was getting away with here and  in ‘Jaws’ which, in these moments, were just as full-on as the horrors, and were often more graphic once the horrors were cut up by censors. Even as a kid, I knew Bruce the shark chomping on Quint in the finale was silly and hints that there’s always a little condescending “Hey, they’ll swallow anything in the end” to Spielberg – but its excess works. This was 1981 and we were just on the brink of the Video Nasty panic that came with ‘81’s ‘Evil Dead’ – and the melting in both are kindred spirits – but even so, that was an ‘X’ (18) and ‘Raiders’ was rated PG, a family film. Gee, ‘Jaws’ is a PG too now, which makes me think that the censors have always had a blind-spot with Spielberg. And even now, these are treasured go-for-broke moments if not the initiation tests for gorehounds they used to be. 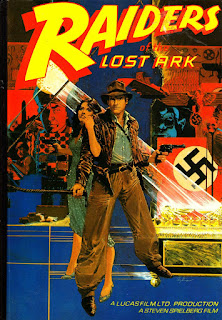 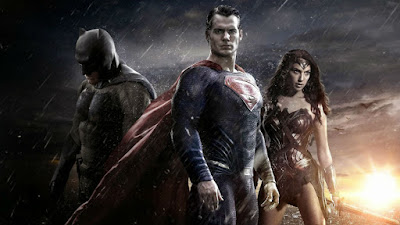 A second watch of 'Batman vs Superman' and the first twenty minutes are fine. There’s the unnecessary recap of Batman’s origin in nightmare form with Snyder’s particular “opening credits” editing style that was so effective with the ‘Watchmen’ opening credits – but even that can’t liven up this well-worn origin – and some action and some spy-like shenanigans and that’s all good enough. It still seems to have promise. And then Jesse Eisenberg does his impression of Lex Luther as The Joker and it’s pretty insufferable – why conceive Luther that way? Go straight to Vincent D’Onofrio in the ‘Daredevil’ TV series. The films takes a true nosedive them, but it’s never badly made. It’s a mess and overloaded and the rivalry between the two heroes never really convinces, although it’s mostly based on Bruce Wayne being an uncompromising asshole. Jeremy Irons makes for a cranky and quite unlikeable Alfred instead of wry and dryly super-efficient. There’s a dream sequence that seems to be there just to allow Batman the fantasy of a different suit and using a gun and owing down bad guys; and make no mistake, he make not actually wield a gun but there’s so many explosions and physical violence that he obviously kills many by proxy. There’s a confusing appearance from The Flash in a vision of sorts. There’s nothing really wrong with Henry Cavil but this Superman … well, although we’re meant to be convinced that he’s conflicted and angst-ridden, it’s not truly convincing as colouring him in and perhaps going with the Good Guy God approach would have been more interesting, done right (like Peter Parker is better for being naïve and gung-ho). He’s not quite 2D in a way that captures the imagination. But a second watch shows that Gal Godot does much with little and that Doomsday is pretty cool for a CGI creation, if it would only linger a little. Oh, and there’s something about other superheroes too. And why leave a Kryptonite spear underwater where any bad-guy could trace it? And superheroes bonding over mummy resolves conflicts... But by then, true interest has been pummeled away by overstuffing the turkey with CGI, protesting too much forgetting to be fun.

But ‘Batman vs Superman’ does have one stand-out scene with Batman’s hand-to-hand combat with a gang of bad guys in a warehouse. That remains and is the one moment when it all comes alive.

Here's the album I made a few years ago, now on YouTube.

Heat - and that damned machismo 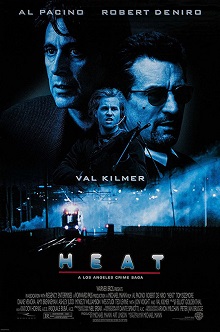 It’s slick and moody, swinging between a tinge of blue filters and bright city sun. There are many impressive set pieces, not least the opening robbery and a central shoot-out. This is why Mann is revered and rightly so. Surely the trend of a lot of Eighties thriller gloss can be credited to him: I remember ‘Miami Vice’ being very influential. He is not style-over-substance, but there’s a shallowness to his focus on troubled men.

But here’s what stops me from fully investing. The thriller elements are great but the boys’ criminality stuff often unintentionally funny when they’re being macho angst-ridden, which is a trait that defines much of Mann’s work. It’s half hour in and the manly tantrums and posturing begin and Pacino starts barking; it gets so they can’t walk into a room without throwing or slapping props.  “I have to hold onto my angst!” Pacino says. Mostly, male relationships are defined by pissing-contests and one-upmanship.* The much touted coffee scene with Pacino and De Niro is of course well played but they talk about family and dreams, which is pretty standard for this kind of thing, and they just come short of saying “Hey, we’re different sides of the same coin, aren’t we?” 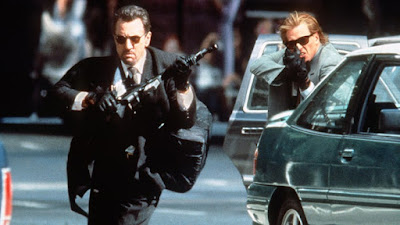 There’s a lot of bullying of pretty women and a serial killer thrown in to no discernible effect other than making a repellent character even more so. All the women are defined by their men and are sympathetic to their faults; all the men are so wedded to their own vision of themselves that it crowds out any definitive space for the women. Indeed, should the women challenge this, the men respond with violence and temper-tantrums. It's like one of those Eighties "adult" moody ballads - the kind that bring so much atmosphere to Mann's films - where men are idealising some romance where the woman got off her pedestal, but the man still blames her beauty. It’s been this way since Mann’s 1981’s ‘Thief’ at least, and there is a sense that we are meant to find the men tragic and poignant for this. But it’s more like Mann’s protagonists are mostly assholes and the female actors giving their roles far more soul and complexity than they perhaps warrant; far more convincingly than the men (in this case headed by Diane Venora, Amy Brenneman and Ashley Judd). It’s the women  that sacrifice themselves to the men’s obsessions and unwillingness to change.

It’s a sense that this all a boy’s game that keeps me from taking it all fully seriously: Mann’s films never quite call the men on their assholishness and the idea that they aren’t actually the tragic martyrs to machismo they would like to imagine themselves to be doesn’t seem an option as their overriding masculinity is the narrative ley lines. It’s this that keeps me at a distance, even as I’m admiring the mood and artistry.

·         Compare with Alan Clarke’s ‘The Firm’ where the men can’t see past petty rivalries and insulting one another; or the wry humour of Sergio Leone's Spaghetti Western showdowns.