"Locke" and mistakes as meltdown. 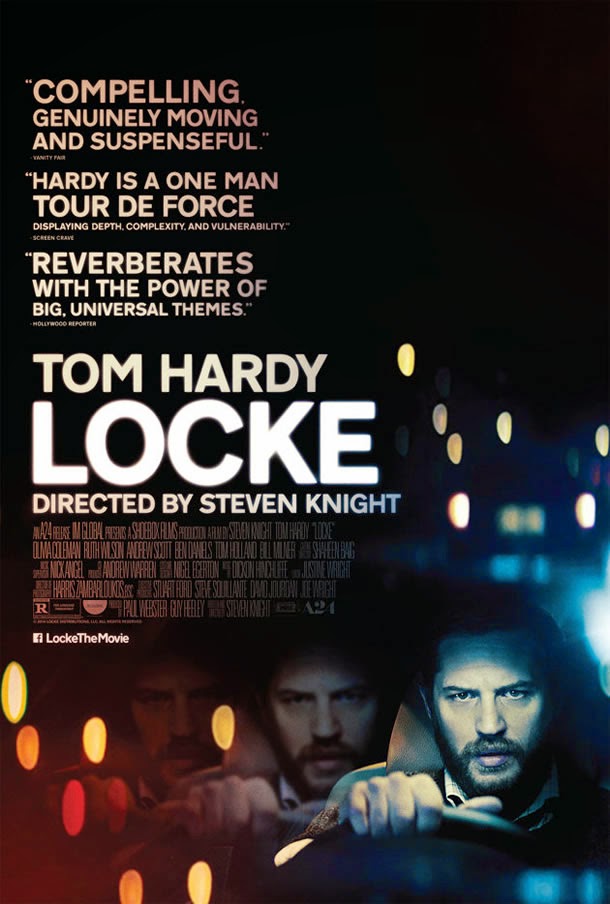 But from tales of youngfemale assertion to the life meltdown of a man. Effectively it is Tom Hardy as a construction manager in a car, on the English motorway, trying to stage-manage and salvage his life through the very modern means of hands-free phone calls. By all accounts, he is a very trustworthy and successful family man and construction manager, but…


Director Steven Knight overcomes any pretensions and limitations that its high-concept premise may have with a lucid, thoroughly engaging script. It is in effect a one-act play/radio drama that simply allows Hardy to do his thing whilst employing motorway lights and dissolves to create a naturally, faintly trippy atmosphere. So organic and convincing are the conversations we hear that the contrivances take a while to become obvious: Ivan Locke fights to ensure the foundations of a building are being laid in his absence whilst his family life is simultaneously falling down around him due to a fleeting infidelity which has him deserting everything in an attempt to do the right thing. Since it is one face we see for the entire running time, there needs be an actor that can effortlessly command his space and Tom Hardy is definitely up for the job, supported by an exceptional supporting voice cast. That he is as far from his “Bronson” persona as he can probably get makes him more fascinating: can you do good when you’ve done bad?


Arguably, “Locke” offers a bleak worldview where mistakes are not to be forgiven, where one wrong foundation, one wrong ingredient in the mix will mean reconciliation is not possible. Are we to agree that Locke – an ostensibly decent man – is deserving of almost complete estrangement due to his infidelity? And surely saying “no” is not endorsing that infidelity but without the room to further explore the complexities and ongoing changes or lack-of-change in the family crisis, there is an aftertaste of meanness. The tale implies that mistakes can’t afford to be made, but surely the film is equally arguing that good people will stumble and blunder and, ultimately, act human. For Locke, he discovers that his sills in reliability and negotiation will not resolve everything, no matter that he carries the philosophy that any crisis can be made good with effort and by doing the right thing. The film gets to the frailty of things but all the grey areas leave our flawed protagonist out on his own.

Where“Spring Breakers” and “We Are The Best” present young women aching to discover and assert themselves, “Locke” presents a man discovering that he is not quite who he hoped to be. “We Are The Best” offers that growing up is as quietly as fun and surprising as it is difficult and painful; “Spring Breakers” offers self-discovers as envisioned by a rudderless, immature youth pop-culture; “Locke” suggests that all your good work can be undone at any given moment, just given a key mistake made.
Posted by Buck Theorem at 6/11/2014 No comments:

"Spring Breakers" and cluelessness as a trippy thing. 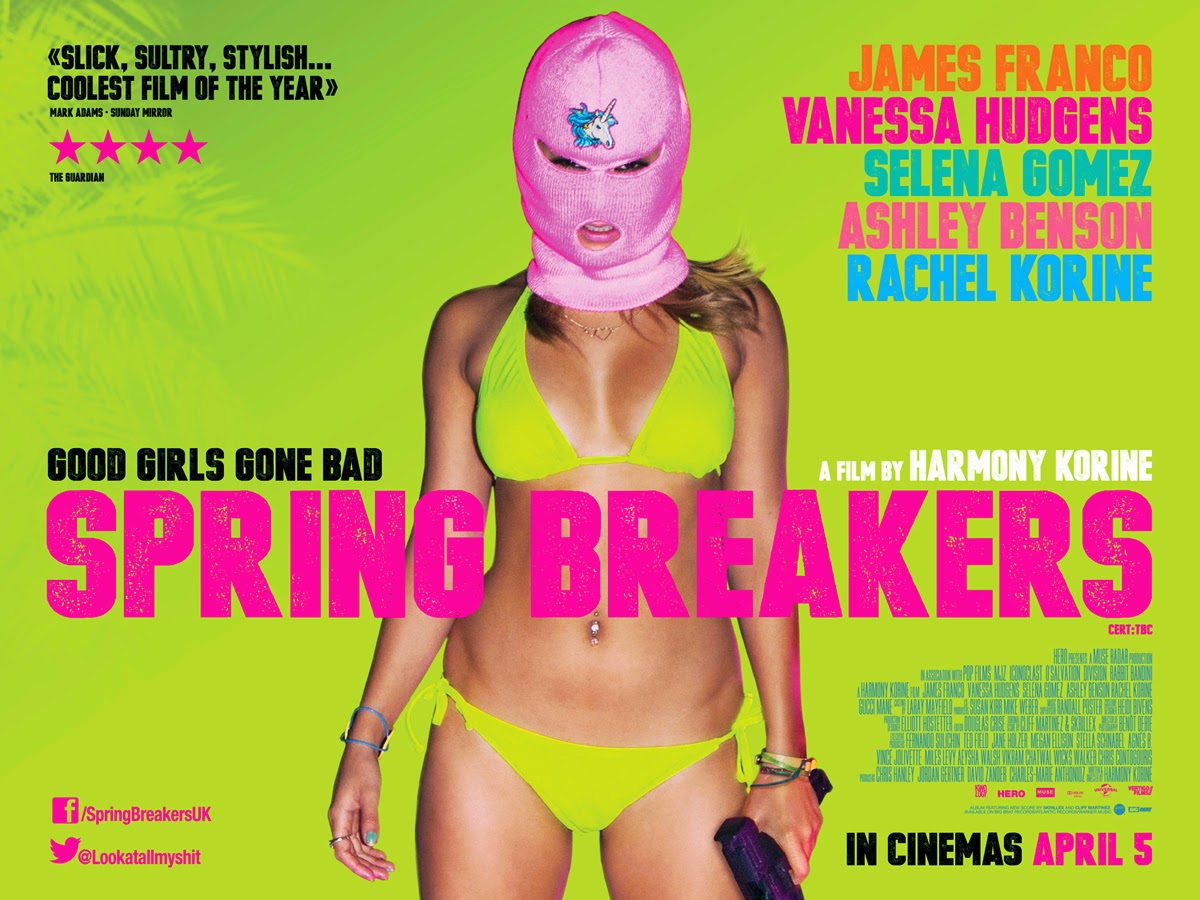 Certainly, the rounded and engaging girls of “We Are The Best” make the bad girls gone bad of Harmony Korine’s “Spring Breakers” look ridiculous, wafer-thin and inane. They start off with a similar sufferance and disillusion of their surroundings and schooldays. These are the privileged class but nevertheless unhappy with not having more and not being able to do just what they like. And so they rob a restaurant with water-pistols, acting like gangster-girls, and head off to Spring Break to discover themselves. Indeed, they mutter on voice-overs about such discoveries and that they are amongst the sweetest people, the best friends ever and that this is a paradise realised: but the truth in the visuals is that they are simply getting drunk, taking drugs, taking off their tops a lot, indulging in indulgence and orgies and hi-energy music. Their vision is vacuous and limited and absurd. It leads nowhere and they offer nothing but their own vacuity. Inevitably, it would seem, this escalates into the pose and debauchery of dressing up in nothing but bikinis, guns and Pussy Riot bunny-masks and going on a killing spree (it’s like the psychedelic MTV-minded wet-dream of “Gummo”’s bunny-boy).


The shallowness is part of the point; there is satire here of a privileged generation stoked up on music-video crime fantasies, pop-culture pose and dressing-up (or lack of), of particularly American fantasies and aspiration of youthful excess. In fact, it is no less deep than “Tree of Life’s” cosmic and domestic musings, and like Malick’s film, “Spring Breakers” strength is as a visual piece, the visuals transcending and giving meaning and life to the limits of the script and meaning. Through neon colours, temporal scrambling, an ever-drifting camera and repetitious phrases on the voice-overs, a psychedelic and dreamy rhythm builds up, making the film seductive as an ambient mood-piece.


Korine’s greatest letdown is in failing the girls of his film: that they are barely characters at all and that their friendship is all the gestures of friendships without substance all becomes very clear when James Franco turns up and steals the show from under them. Franco’s performance has been rightly celebrated and he certainly offers a fine depiction of a shallow, ridiculous character; someone who believes the tokens of what is supposedly the gangster lifestyle maketh the man. Oh, there is no mistaking that these girls are his soul mates … although surprisingly, when a couple of the girls just want to go home, that’s what they do. He isn’t mean, cruel or sexually sadistic, but he is the only fleshed-out character in this bikini-kill fantasia: he takes over the voice-over and by the end the girls don’t even have that to convey the discrepancies between what we hear and what we are seeing. This also leave the satirical edge all dried up long before the end. They have one potentially game-changing scene where they turn the tables on him half-way through his boasting, gunplay and foreplay, but this proves not be a twist in the tale where they reclaim their story but a bonding exercise.


But still, the visuals cascade and blur and push for a genuine pop-fantasia. Had “Spring Breakers” kept focus the girls and given them their due, it could have been similar to one of Lana del Rey’s pop-tales of messed-up girls falling for a life of crime, thinking it’s all part of being cool. As it is, it leaves them nowhere as more-or-less gun-toting nobodies.


Nevertheless, it’s still quite a trip through a very minor crime story. If one gives in to the visuals then Korine emerges as a pop-director who has filtered the nihilism of the MTV generation into perhaps his most accessible mash-up yet.

"We Are the Best" and punk as the sweetest thing.

By chance, I happened to see “Spring Breakers”, “We Are the Best” and “Locke” consecutively and each seemed to say something about the other in comparison.


WE ARE THE BEST 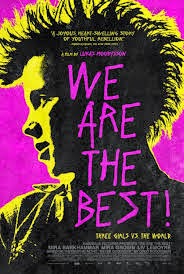 In tales of “good girls gone bad”, as it were, “We Are The Best” proves a delightful and modest tale of growing up for three Swedish teenage girls forming punk band in the early Eighties. It is not so much coming-of-age, which perhaps implies some lesson learnt, but more just growing up and trying to get noticed, make your mark, have friends, have fun and trying to assert your identity. The young women in Harmony Korine’s “Spring Breakers” dive into a world of hedonism trying to find themselves, trying to work out who they are: the just-teen girls of Moodyson’s “We Are The Best” seem to already know who they are, but just need to work out the world around them with that information in mind. Bobo is shy but also aware and quietly as sure of herself and as playfully rebellious as her outspoken, politicised best friend Klara (Mira Glosin). These are punk-posing kids, but they aren’t mean or stupid. They’re just bored of the hypocrisies they see in the adult world around them and just want to push back a bit and have a good time: punk happens to be the language and medium that they use.


So, fed up with onset of crap disco and new wave around them, as well as being told that they are ugly, the girls hilariously blag themselves some rehearsal space at the expense of the local prog-rock band just to get back at them and to shake things up. And so, inadvertently, they find themselves in a band. They have no skill but lots of attitude and they know what they don’t like, all good for inventing a punk band from nothing. And what they don’t like is gym class, so they have quickly put together an anti-sport, anti-mainstream song. But they can’t play, so they cheerfully set about befriending and recruiting quiet Christian girl Hedvig because she can actually play guitar. Of course, her Christianity is totally against what Klara and Bobo are against – being the apparent home of conformity and conservatism – but it doesn’t stop her joining the band and turning punkish herself. Indeed, perhaps the most moving moment in this joyfully rambling and naturalistic film is when Bobo and Klara begin to properly learn how to play their first proper notes and start to hear their anti-sport song coming together, or their simple realisation that changing a lyric can improve a song. Oh, they aren’t interested in any craftsmanship, but anyone who creates art can surely take delight in these adorable girls taking their first proper steps as artists of some sort. The conversion of their boredom and general teenage disaffection into music is a fantastic act of development and personal growth.


The film may be a soft-natured affair, but its strength is a nuanced and unfussy respect for offhand humour, for the teenage condition and the growth of an artist and friendships between three girls. It falls into light but mature tales of growing up such as “My Life as a Dog” and “Boy” and “Ake and his World”, but also spiced with the rebellion of music. Based upon the graphic novel by Moodyson’s wife Coco, it is a more convincing confection than the contrived miseries of his “Lilya4ever”. There will be many particular Swedish jokes and details that will be missed by non-Swedes, but it has plenty of material recognised to anyone who has been an outsider kid. Never once does the film let itself talk down to these kids by circumscribing their innate maturity and goofiness with cheap drama: this is just their friendship and they learn perhaps nothing more than how to play a song to piss off people and then to act up a lot over the end credits. These are good girls going not so much bad but punking around for fun and to go against the grain.

For comparison, look at Harmony Korine's "Spring Breakers".
Posted by Buck Theorem at 6/11/2014 No comments: