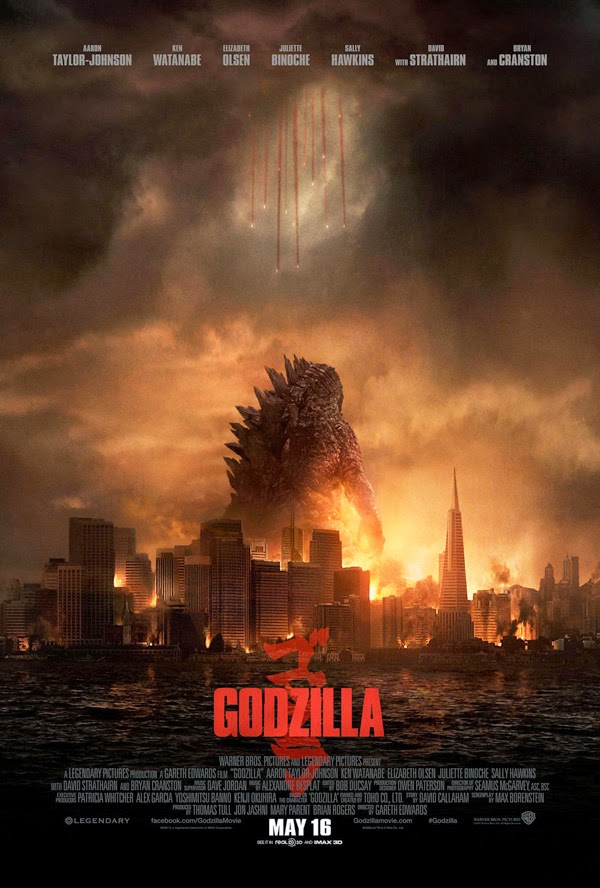 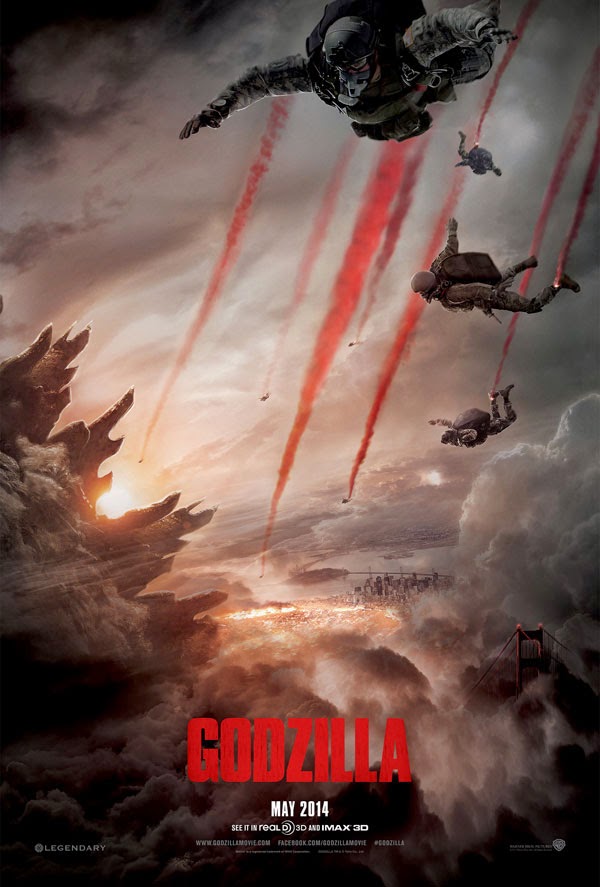 What to do when a film is half good? For example, the parts of “Godzilla” 2014 that work are the stuff to do with Bryan Cranston and the monsters, but the parts with Aaron Taylor-Johnson don’t so work so well. The trailers were great – and as a general rule I don’t like most trailers - and this Godzilla promised so much when it was disclosed that it was to be helmed by the director of “Monsters”, Gareth Edwards. “Monsters” was like the “Before Sunrise” of creature features in that it focused primarily on a couple discovering love on the wrong side of an alien infestation. In fact its crossing-the-border drama made it more understated and equally successful in the social commentary stakes than Neill Blomkamp’s “District 9” and “Elysium”. But “Monsters” was interested in real people whereas “Godzilla” offers only Hollywood types: a good-looking stoic lead whose story intertwines with the rise of the Kaiju, but the story is based upon three-act clichés that ask us to relate to a somewhat two-dimensional lead character. The interesting actors are killed off early – Cranston won’t make it to the second act, no matter what the trailers may promise, and Julette Binoche is just a cameo – and we are left with under-written characters. This wouldn’t be so much of a problem if the film didn’t invest so much in the “human story”, but what this means is caring for the lead character at the expense of the presumably hundreds upon hundreds of faceless dead. So what you end up saying is The parts with Godzilla are good and the parts with Aaron Johnson-Smith are bad.

The Godzilla stuff is what the audience comes for, of course, and this Godzilla certainly looks the part. The highlights: the sky-dive; Godzilla’s back lighting up; Godzilla blasting his death-ray down a MUTO’s throat. Oh, and Godzilla screaming into the audience. CGI has come a long way since “Jurassic Park” and when it’s used well it can be impressive: filming everything through the fog of destruction helps the effects a great deal, just as having the apes actors on set as much as possible helped “Dawn of the Planet of the Apes”. These two CGI extravaganzas are both impressive on a technical level but both share the weakness of a somewhat obvious script and thinness of human dramatics: but “Apes” overcomes because it focuses on the ape dramatics and its weaknesses, for the most part, are secondary whereas in “Godzilla” the insistence on the human element – which worked so well for “Monsters” – only goes to show how hackneyed the human element is.

Let’s not forget how gloriously daft most of the Godzilla sequels are anyhow, and how feeble the characters have always been, but that’s no excuse. Everyone is unanimous that Roland Emmerich’s 1998 “Godzilla” was terrible but Edwards’ reboot isn’t terrible, just half good, which means half the audience disliked it. It’s proven a divisive film. So what can you do? Lower your expectations and enjoy the monster show, perhaps. Edwards takes his time but the teases are excellent and the monsters and the destruction they cause are indeed spectacular. It’s not the ultimate monster narrative we wanted because the story does nothing to elevate the material, but for monster action it shows that CGI can now deliver on its promise and Godzilla has probably never looked so realistic. 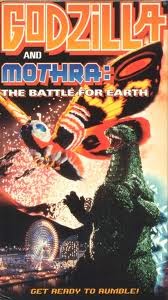 Meteorite falls on Earth and wakes up Godzilla and Battra. Meanwhile, in Indiana Jones land, treasure hunter Takuya Fujito gets involved in a Government investigation of various ecological disturbances around the meteorite. Battra destroys city. Fujito and others discover Mothra’s egg and as they take it home for some unethical company, Godzilla, Mothra and Battra have a fight, setting off all kinds of volcanic activity. Mothra’s tiny fairy-like guardians, the Cosmos, are kidnapped. Mothra levels Tokyo to check up on them and then Mothra changes from unconvincing caterpillar into unconvincing fluffy moth thing and fights now airborne Battra. Godzilla joins in. Battra turns good and helps fight Godzilla.
With a plot surely made up as it went along, propelled by nothing more than someone gasping “Godzilla!” and then there he is, it’s up to the showdowns to save the whole enterprise. Subplots drop away and characters with typically bad dialogue (and dubbing) become nothing more than ringside spectators heckling the monster fights. The fights here are less wrestling than laser beams and it has to be said that “Godzilla vs Mothra” provides quite a light-show. Some moments such as Mothra cocooning the Capital Building are bizarrely pretty, shot as if they were gorgeous epics. The scenes of the city being trashed and refugees fleeing are closer to the original “Godzilla” than the late Seventies jokey efforts, but the series latterly moves into ecological rather than nuclear warnings. Although Godzilla remains a startling signifier of man-made holocaust, the plots aren’t strong enough to uphold the original message.
So it’s up to the monsters. Battra is a vast spiky improvement upon the Mothra design; a mole-moth-rhino of sorts. Godzilla is in his oddly cat-like phase with barely a jaw to jutt. Forget the humans; enjoy the light-show and mass destruction.
Posted by Buck Theorem at 8/10/2014 No comments: 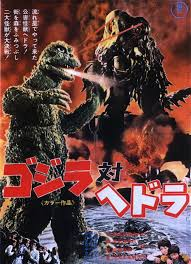 A truly bizarre film with almost everything thrown into the mix – psychedilic visuals and musical interludes, animation (not quite Pink Floyd – The Wall, though), stop-animation, kiddie-movie, anti-pollution warning, multiple screens, etc. None of this enlivens the sluggish pace, dull dialogue and ~ catastrophically ~ mundane fight-scenes between Hedorah and Godzilla himself. In fact, Godzilla is almost incidental as the creature made of sludge and pollution, Hedorah, runs amok. It shits, pukes and gases out over people, sometimes dissolving them into skeletons. Hedorah itself is a truly repellent and silly creation, but the script labours under the destruction-of-nature message. A tropical fish tank represents pure oceans, but even that succumbs. Once, just having Godzilla lay waste to Japan was enough to conjure hints of atomic bombs and mass-disaster but the Earth faces pollution monsters too.


This eleventh Godzilla installment begins with a bizarre opening number, a psychedelic theme, a cross between a James Bond credits sequence with lyrics listing elements polluting our world. Next thing, it’s a children’s “Save the Earth” monster flick with a tadpole turd-like Hedorah and pauses for science lessons. Half atrocious, half spellbindingly odd ~ who knows what they were thinking? Most resonant moment has Godzilla being buried under an ocean of sludge. 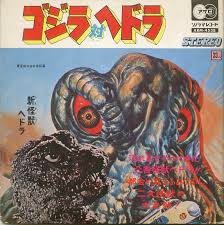 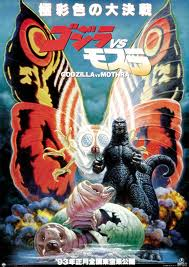 Fourth, somewhat lackluster entry into the Godzilla series. Giant Mothra egg is found and is immediately accosted by unscrupulous company that want to exploit it. The miniature Mothra guardians, the Peanuts Twins, plead with the human race to return the egg, but the businessmen are too busy building a theme park around it. All this is quickly swept aside when Godzilla, disturbed by some atomic tomfoolery again, rises up out of a muddy wasteland – which makes a change from his usual aquatic entrances. Mothra is persuaded to stop Godzilla’s rampage before dying of natural causes and making way for the  contents of the egg, which turn out to be twins.

Since the human ingredient and plots in these sequels give daytime soaps a sophisticated feel, the films mostly fall and stand on the monster, the fights and the destruction. “Godzilla vs Mothra” delivers only sundry efforts in these departments. Godzilla looks as if he has bushy eyebrows. The bad guys over-act like “Thunderbirds” puppets. The good guys barely register. Plastic model tanks melt. As with all Mothra films, the action pauses for musical interludes from the Peanuts Twins and friends. The element of children is introduced, if briefly, paving way for the more kid-orientated sequels and, inevitably, “Godzilla vs Hedorah”. It is always funny to watch something so awesome and primal as Godzilla fight a monster as crap as Mothra. The giant lizard puts up a disappointing fight against the overgrown moth and its twins who, in their larvae stage, simply squirt Godzilla with sticky stuff until he falls into the ocean. Until next time. 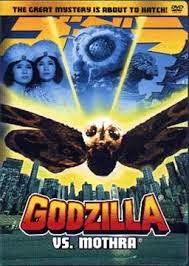 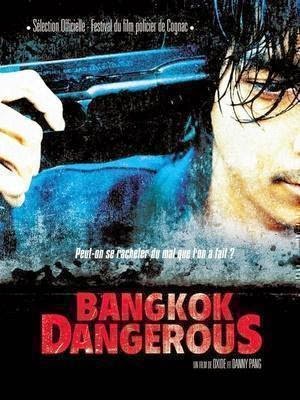 
Actually, there isn’t too much “dangerous” in the Pang brothers’ soft-centred hit-man tale. Oh, plenty of blood and shooting, but nothing that will trouble or tax the genre. The excess is all in the aesthetic and tricks with which the Pangs overwrite every scene: they cannot film someone washing their face in a sink without multiple cuts to a turning of the faucet. Filters colour everything, every action affected in some filmmaking tic, nothing left to breathe on its own. The film chokes on its own style, but it isn’t necessarily stylish: its action scenes edited to such an extreme that they are often whittled down to incomprehensibility; the doomed romaniticism is saddled with childish scripting so that they whole things ends up being something like a teenagers playing at gangsters playing in funky clothes. But back to style: it does not have the genre savvy or let’s-screw-with-this attitude of Takashi Miike; it is not a film that could ever achieve the elegance of  Wong Kar-Wai, no matter how hard it uses colour and changes film stock. But if you have come for style-over-substance, there is that.
Posted by Buck Theorem at 8/02/2014 No comments: