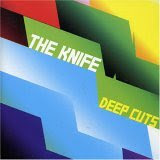 From the opening of electronica-with-Carribbean leanings, I knew this was going to be something. And then when that opening line came in... Perhaps a lot of my introduction to "Pass This On" was influenced experiencing it first via the video. I suspect that that first line would have hooked me anyhow, but there is no doubting there was that extra surprise when sung by the transvestite in the video. The video looks like it took place in a place off of David Lynch drive. (Awesomely seductive video; the Karin Dreijer impersonator, looking through youtube comments, appears to be Rickard Engfors.)

By rights, this shouldn't be a "favourite", as I reckon favourites ought to be recognised over time. But when a song hits, sometimes you just know. I never doubted "Wicked Game", for example. "Pass This On" shouldn't necessarily be creepy, but there is something not quite right about it. An older woman falls for a friend's younger brother, giving us the killer line and Karin Dreijer's killer delivery, "Did he mention my age, love? Or is he more into young girls with dyed black hair? I'm in love with your brother." She reads it as one breathless line, and that Swedish accent helps no end. Dreijer is also unafraid to give some high-pitched weird backing-vocals, playing against her otherwise passionately flat key performance. The effect really is hard to describe... why does it sound spooky? You go back to it trying to unlock its mystery. The vocal melody aches and the synths zap, chime and limbo with the certainty that keyboards too can be the perfect foil for unrequited passion and strangeness. I bought the album "Deep Cuts" within the week and was soooo happy when it met all my expectations and then some.
Posted by Buck Theorem at 2/16/2007