Finally, I get to see "300", a film so fuelled by testosterone, it made me want to oil myself down and photoshop my abdominals. It's one big shout for manly war filtered through blood red, gold and slo-mo. As an army promotional tool, as a call for the arrogance, self-righteousness and sacrifice of kamikaze soldiers, it scores highly. There are also, famously, lashings of homoerotica, homophobia, a little racism, a little misogyny, a little nod to feminism (behind every great man… etc.), a little sneering at the soldiering pretensions of the proletariat, an annoying mythologizing voice-over, some scary stuff about making boys battle-friendly the day they can play-fight, acres of blood and slaughter, shouting… It's like being tea-bagged by a fascist. 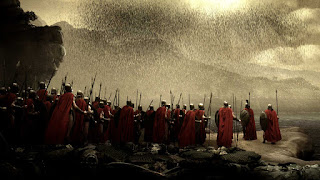 There is little refuting the passionate and widespread criticisms of Zack Snyder's adaptation of the Frank Miller graphic novel, and it barely wears a posing pouch of subtext. It is not pacifist-, leftist- or liberal-friendly and like any happy hawker, it shouts its way into war, bellowing "Victory!" even when its forces are very visibly being wiped out. But such seriously politicised evaluations do seem to wane in the light of fabulist beasts and an artificial aesthetic every bit as consummate at that other Miller adaptation, "Sin City". While "Sin City" had the virtue of being pure pulp with nihilistic frission and pull of noir plotting, "300" lacks true substance. It does not hold up to scrutiny: it's not hard to discredit its seeming use of the Spartans as the American underdogs fighting for liberty, fraternity and warmongering against mysticism and tyranny. It is not hard to make a leap to more appropriately imagining the Spartans as, say, Vietnamese or Muslim radicals. Why, I am not sure there is ever really a sense of three hundred Spartans at all… a few dozen, maybe. While its superficial agenda is unprogressive, reactionary and arguably reprehensible to any moderate, it is also such a work of superficiality and absurdity that it is barely worth taking seriously. It is, very much, a dumb action film and, moreover, pure hyperbolic fantasy.

As fantasy, it has more lineage with Harryhausen Sinbad romps than typical Hollywood historical epics. It has all the usual trimmings: an outrageous, slightly monstrous villain advocating genocide and bling; an association between ugliness and Evil so obvious, a five-year old could elucidate upon it; a dominant but ultimately substance-free hero who can crack wise, avoid villainous queer-tinged come-ons, lead his men to the fight and appreciate the occasional moment of disingenuous pathos; a little courtly intrigue and betrayal; some state-of-the art monsters; a few gorgeous visuals… and all of this in that blood red, gold and slo-mo. All politics (i.e. diplomacy and debate) are proven as antiquated (as lecherous old men, for example), weak and corrupt - meanwhile, the beefcake soldiers get on with dealing with the threat with their fists, like real men. In red capes and thongs. But the political subplot really is filler, and the monsters seem to be carrying on careers from Peter Jackson's "Lord of the Rings" trilogy, dropping in for cameos that barely register (as a potential monster movie, it is also a bit of a cheat). There is nothing here as truly gripping, thrilling or carefully staged as the opening of Snyder's "Dawn of the Dead" remake.

Being a product of the post-9/11 climate gives "300" that much more impetus as a battle cry, with its portrayal of bad guys as literally inhuman and its presentation of war as the greatest of inevitable glories and deaths and, indeed, as unavoidable and part of the system. All with a dash of occasional electrifying metal-edged guitars for extra cool. But, again, once submerged wholly in the artificial landscapes and beautifying slow-motion (my favourite being the impossible storm at see laying waste to Persian ships), long before we get to the CGI monsters, the whole pantomime is so preposterous that, for all its lack of substantial story and deplorable politics, it can be enjoyed on dumb fantasy and aesthetic levels. With its bursts of beauty and occasional inventiveness, it can be tolerated like an entertaining, loud-mouthed, probably deplorable but intermittently talented asshole with whom one has no qualms at humouring and laughing at.