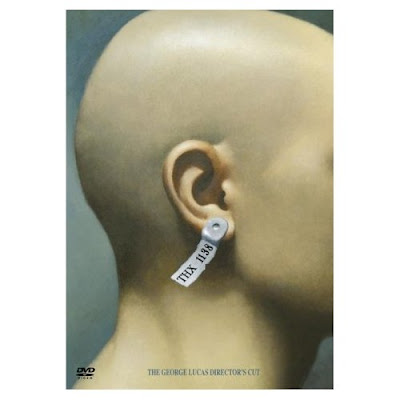 It does feel as if two quite different directors helmed “THX 1138” and “Star Wars”. Not so much that you can’t see where the Stormtroopers, comedy robots, gadgets, slightly detached and simplistic characterisations and the limited colour and hardware palette came from; but it is different enough that “THX 1138” feels like the work of a low-budget, b-movie arthouse auteur rather than inventor of the modern blockbuster franchise cinema. “THX 1138” looks made by a cult director who would go the other way and create further formally experimental genre pieces, rather than the great sweeps and crowd-pleasing pulp sentiment and action of Luke Skywalker versus Darth Vadar. There's even the hint of chill that defines David Cronenberg's earliest works. “THX 1138” also bears the kind of clinical, slightly visionary Dystopian qualities that can then be found in seminal science-fiction literature such as “We” and “Brave New World”, and films such as “The Andromeda Strain” and “The Forbin Project” through to “Code46” and “Eden Log”. With its eerie and disturbing future conceit, with brilliant design and a slightly abstract presentation, "THX 1138" has the appearance of mature, ‘hard’ sci-fi rather than pulp, although it is ultimately as much pulp as, say, “Logan’s Run” and “Planet of the Apes” and the like. Indeed, Lucas opens with a homage to early “Buck Rogers” films before introducing us to his Dystopia, as if to directly say: ‘we started with the passionate adventures of pulp, and we ended up with this.' 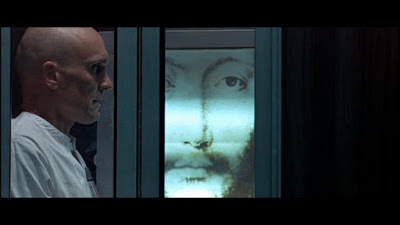 It takes a moment for us to even identify whom we shall be following. We are thrown into this world instantaneously by the means of distorted, overlapping dialogue tracks, mostly jargon relating to work; by surveillance and observation camera shots, as well as a gallery of shaven-headed monitors, workers and random civilians whom we can’t particularly distinguish. Walter Murch’s fantastic sound-design demands to be taken seriously as both a character in its own right and as the film’s true triumph: it is omnipresent, simultaneously disorientating and informative, verging on white noise. Lucas is bold in using an almost Brechtian use of disorientating sound track, clone-like appearance of actors, filtering events through other cameras. He is not an artful director - it's like plane prose telling a dense story - but he knows how to frame a shot and not get in the way.

One of the best early shots is that of the surveillance camera view of an accident at a plant in which explosions wipe out several running staff… the figures are distant, unclear, a little pixellated and distorted on screen, and this makes it all the more chilling and real somehow. Watch for the worker who shoves his colleague back into the danger area, shutting the door on him, only to be blown away himself: it is an action shot that achieves verisimilitude and extra horror, rather than thrills, by being viewed one step removed by the audience, via a screen within the screen they are watching.

Best of all, rather than a lot of exposition, or myth-making, Lucas conveys the details of this world through visuals and audio. It is a familiar Dystopian narrative - hapless THX 1138 is the rebel against an oppressed, desensitised society when his house mate LUH messes with his compulsory drug intake and they have forbidden sex - but it is made more abstract and fascinating by being interrupted by tiny interludes and to the incidental workings of the society around our bewildered protagonists. People watch a sports match. A police robot amuses a bunch of kids. People work, walk, step into booths where they make confessions to a Jesus-like picture… which are recorded and monitored, or simply stored away with millions of other confessions (a neat conflation of Catholicism and Big Brother). Even towards the end, Lucas pauses to introduce more details that flesh out the society: Donald Pleasance - as SEN - reminisces with some kids about how when he was a kid, education came in huge bottles rather than the mini-intravenous bottles the children have taped to their arms as they play. This is one of the film’s most successful visual achievements: we see the children as the appear at the top of an escalator, the “lessons” intravenously fed into their arms, conjuring up the image of hospital patients on a conveyer belt, churned out into society. The culmative effect of this visual and aural collage, as Chris Basanti says, is of 'a fractured tone poem".

Finally, we settle upon THX himself, and it is Robert Duvall. The film benefits immensely from a wise cast: Duvall and Pleasance especially know how to work this material. Duvall does much with a limited role, conveying a slow awakening of awareness and character. Pleasance does a neat line in borderline creepiness and befuddlement. Maggie OcOmie manages to squeeze in the film's real source of humanity in the brief time she is on screen as LUH. But performances are not the key to the film's success.
Elsewhere, Lucas creates a whole web of criticism: blundering bureaucracy, stolid police brutality (which has its own plot-free hologram-show for violence entertainment!); faux-passionate law and trial gibberish; the intelligentsia… it’s all here. As ever, police states and conformism are the umbrella targets. Although much of it feels timeless (in the era of the police taser, the police brutality sequences ring especially prescient), Dragan Antulov at Draxblog places “THX 1138” firmly as a result of the 1969s:
“The futuristic underground world is natural progression of everything which was wrong with Western civilisation in 1960s – faceless and bureaucratic state is as oppressive as those behind 1960s Iron Curtain, while the consumerist culture is as tasteless and worthless as in 1960s West.”
Perhaps the best gag is the subversion of the drug culture scare: in this world, it is illegal not to take drugs. Government prescribed and prone to make you a virtual working zombie, of course. All this is a fine elaboration on Lucas' original student short film, "Electronic Labyrinth THX 4EB": this earlier THX has some slightly psychedelic allusions: a slightly hippyish theme song, some flashing lights. 4EB runs through a world of white, concrete and steel, and the powers that be struggle to contain him from afar electronically. The key ingredients, including the ultimately startling and ambiguous final shot, are all present and correct, but the full drollness of this Dystopia is not quite in full view. 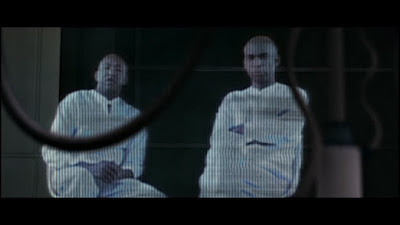 "THX 1138" is a very white film: the walls, the uniforms, the shaven heads. When THX 1138 goes across the cell with Donald Pleasance in tow, they are very shocked to encounter a black person. The only black people they know of are the masturbatory holograms of people of colour dancing naked to jungle rhythms and cracking wise on holo-TV. For the moment, let’s sidestep the Lucas' future problematic use of racial stereotypes for alien characteristics (looking at you, Jar-Jar Binks, Yoda, et al). The black man THX meets is a hologram, who has just wandered out of the virtual world to see what the real one is like. It’s a nice enough gag, but what it says about the technology of the world is hard to pin down: that technology has achieved sentience of its own? That the film has suddenly forsaken the realism of its hardware and technology and stepped into fantasy, perhaps? But it also hints at a world where, say, white privilege and prejudice has successfully eradicated people of colour and minorities, reduced them to ghosts. Indeed, the casting seems to bear this out, for it is seemingly populated solely by a pale and bald population. People of colour are relegated to holograms, personifying the baser needs of white people (e.g, sex and humour). But the hologram is not exactly the black comedy relief, thankfully, and in fact brings a warmth to the last act absent from the sterile world. Some end result of white man’s Puritanism and perhaps Conservatism is, then, the Dystopia that THX 1138 lives in.
It is also quite pithy about heroism. THX 1138 isn’t particularly a hero, or a rebel. He comes to his rebellion by accident, but once LUH messes with his meds and he ends up in the shared cell-space, it is pure frustration that initially drives him on. Lucas subverts the idea of the prison by making it ostensibly wall-less and endless white, simultaneously claustrophobic and agoraphobic. Pleasance’s SEN also has designs on THX 1138 and subverts the system to get them to share living space; THX turns him in and this is how they end up in the cell together. SEN talks of revolution and argues with other dissidents and criminals about rebellion, society and what they will do and what it all means. They philosophise and debate and yet do not do the simplest thing, which is what THX ultimately does by getting up and walking out on them. This leads to escape. Thereafter, he seems to run and carry on simply to see what happens. Meanwhile, lagging behind, SEN simply gets a taste of the world beyond and retreats back into what he knows, paralysed by the thought of real adventure and escape. 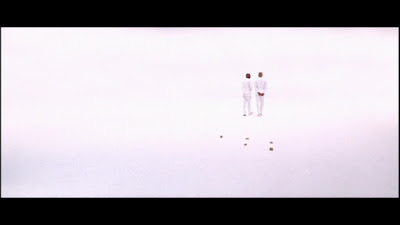 It is here that the most evident touching-up effect in Lucas’ 2004 Director’s Cut restoration of “THX 1138” appears: Pleasance stumbles upon a CGI bug - which chatters in one of those comedy-like alien noises that Lucas so loves. The CGI seems out of place, a rude anomaly in a retro-classic - but it is not gratuitous, for the bug does at least have purpose: encountering the bug makes SEN back away from the possibility of braving the unknown. Elsewhere, the updated special-effects fall mostly seamlessly into the film, fleshing it out, showing that when a director goes back to tinker and insert the next generation of special effects technology into an old work, it doesn’t necessary need to look like a jarring graft job.
When I watched “THX 1138” the first few times as a teenager, much of the dark humour was lost on me; at first, for me it was all about a scary prospect of a future society. Now, it is the satire that truly satisfies, and it is this that makes this a film that rewards watching numerous times. ‘THX 1138’ is full of haunting stark visuals and clinically chilling demonstrations of a technologically fixated authority, one that is bureaucratically flawed, as befitting of the best Dystopian science-fiction. The design, aesthetic and agenda are consistent and compelling. For all its starkness, it is loaded with fascinating details and deadpan humour. Unintelligible trials, impenetrable technical jargon, creepy and blundering police robots, workers casually making errors and not taking responsibility for them... In the end, THX1138 escapes simply due to police force budgetary limitations. It is a wonder how the genuinely satirical eye that conceived “THX 1138” disappeared by the time the inane philosophies of “Star Wars” came around. 'It is also interesting that Lucas cannot maintain the grim "1984" tone throughout the movie," John Brosnan writes [1]. Indeed, it is as if Lucas wanted to get this serious stuff off his chest before returning to “Buck Rogers” and getting on with space opera. And, of course, we now know which led to the money. 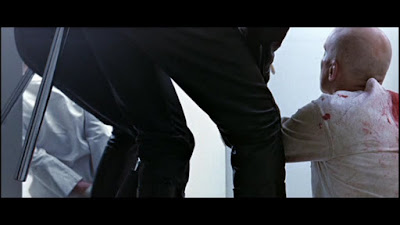 Good dispatch and this enter helped me alot in my college assignement. Thanks you on your information.

Sorry for my bad english. Thank you so much for your good post. Your post helped me in my college assignment, If you can provide me more details please email me.