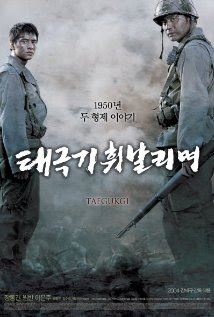 We start by literally digging up the history of the Korean war: an excavation of a battlefield is underway. Everything is as straightforward as can be; we know where we stand and the conventions are all in place (at the very lest, Spielberg’s war epics shall be good indications of what’s to come). Triggered by the excavation and the search for a battlefield survivor, a flashback returns us to 1950 at the outbreak of the Korean war. Grand period street scene recreations abound, against which our two protagonists, the brothers, dash around as the score flourishes. All very Segio Leone, very Bertolucci, etc.


“Brotherhood” is a struggle between the overwhelming achievement of its battle scenes and the overwhelming forces of its melodrama. The latter provides an almost perfunctory framework within which the former can operate. The melodrama of the tale of two brothers coerced into the Korean war runs along emotional and narratively contrived and predictable lines: it starts out all “Once Upon A Time in Korea” with the immense street scenes epic in detail and nostalgic in tone, for we join them on The Perfect Day Before Their Lives Changed Forever. We know that these opening scenes will come back as flashbacks later on in more fraught times. One brother – Jin-saeok Lee (Bin Won) - is an academic, and the other – Jin-tae Lee (Dong-gun Jang) - is a ‘rough’ streetwise shoe-seller. Later, there shall be a lot of sentiment over both symbolic pens and shoes. So rich is their environment and set design that the obviousness of what the narrative is doing and what is being set up is secondary. The broad strokes may make Je-Gyu’s film undemanding, but the details frequently keep it compelling: the maggots on casualty wounds; the starvation; the way the young men are duped into being drafted into the army; the confusion and in-fighting about who, exactly, is the enemy. Even better is the way Je-Gyu frequently shows how the epic qualities of war, with which we are all acquainted from cinema, is always reduced to hand-to-hand combat: the melees remind us that this is not only about a bunch of extras and dummies flying around in the distance to frightening and thrilling explosions, but also the messy, chaotic, free-for-all man-to-man combat that leaves life a second-to-second business. So visceral and intimate are these masses of fist-fights of the first battle scene – so brilliantly achieved – that by the end of the first hour it feels as if “Brotherhood” is already done, having fulfilled its quota.


But there is a further hour and a half to go. The rough brother is corrupted by war, by his own heroism, even as his pen-pushing sibling walks through unscathed much like an untouched virgin in a brothel. Je-Gyu appears to be trying for something mythical, totemic and/or archetypal in this tale of brotherly love driven apart by war, but all this seems to mean is that the melodrama increases without ever straining convention or anything nuanced. We also get many more battle scenes, and these often take the breath away. In their insistence and persistence that epic battles are always ultimately about a mass of men pounding and stabbing away at one other in trenches - thrashing around on top of each other in total desperate and murderous mayhem with very little rhyme or reason other than to stay alive - the battle scenes are as consummate condemnation of war as any you are likely to see. Jin-tae is a virtual superman in his heroism, seeming impervious to hails of bullet at times, and yet Je-Gyu never wallows in the dubious victories of war. The soldiers and streets may celebrate, but after the first victory party, these celebrations seem to become hollow and tired and by rote. Their propagandist nature rises to the surface with repetition. But “Brotherhood” has its own agenda of sentiment and by the final battle this has drowned those smarter details and, like so many war films, reduces the huge horror to a [sibling] love story, to the detriment of insight.


“Brotherhood” probably isn’t much of a digging up of Korea’s history of conflict - I certainly learnt nothing specific about its causes and complexities, although mass confusion at gound-level seems a reasonable estimate of life during wartime - and there is certainly merit in dragging it to the heel of human tragedy, to the individuals and families torn apart. But arguably a clear and less fevered eye is more instructive and so “Brotherhood” feels classic only in the way that classics may have once relied too much upon sentiment and a grand scale to avoid politics and insights (for example: Eastwood’s “Letters From Iwo Jima” provides a similar but cooler and more incisive comparison; “Brotherhood” is more like “Flags of Our Fathers” in its reliance upon nostalgia and over-cooked pathos). But there is a lot of terrible truth in those numerous battle scenes and it is those that will leave the viewer breathless, shaken and hugely impressed. The actual tale of brotherhood evaporates in a explosion of melodramatic cliché.
Posted by Buck Theorem at 7/31/2011