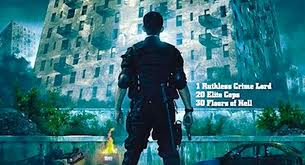 The credits are barely done and the raid of the title is underway. Within ten minutes, the SWAT team’s stealth is blown. In twenty, the big bad guy is calling upon everyone in the high-rise hideaway for the murderous to take down the SWAT team. By thirty, there’s an all-out gun war that should please any fire-power fan used to the American means of action cinema - plus some nice use of light to please the eye - with disposable bad guys swarming like zombie hordes and the rapidly dwindling good guys hacking through floors to get away. And then, at thirty minutes when all the ammunition has run out, then things get going.

Here is a film as one big action sequence.

And as an action film, it is one big wow.

If a film could bruise you, watching “The Raid” would leave you waking up in intensive care.  Welsh director Gareth Evens goes to Indonesia and makes exemplary martial arts film – in this case, silat, Indonesia’s native martial art. “The Raid” is in effect one long action sequence, untroubled by too much plot or narrative, even though these elements are present enough to bolster repeat viewings: quickly it goes through the shoot-out phase before getting down to its martial arts priorities. There is a dash of the sentimental in order to invest the bare minimum of character details and audience sympathy: we meet our SWAT team protagonist, Rama (Iko Uwais), when he is getting ready to leave for work, kissing his pregnant wife goodbye before embarking upon the raid in question; and later there are some sibling issues and corruption, but that’s about it. No, the true narrative and sub-plots of “The Raid” are the action sequences and the jaw-dropping hand-to-hand combat which is some of the very best ever captured on screen. There is none of the snap-snap-snap editing, the kind of every-second jump-cutting that many contemporary action editors believe heighten speed and adrenalin: no, the best action sequences allow enough space so you can actually see what is happening and how exemplary the fighting and the stunt-work is. The editing here is so fluid and complementary to the fighters that you will most likely barely note the cuts.

And “The Raid” offers wave upon wave of fight set-pieces. When the first corridor melee kicks in, after all the scary-thrilling shoot-outs and hacking through floors is done, “The Raid” truly distinguishes itself as a candidate for one of the best fight-films you shall ever see. Iko Uwais, who plays our protagonist Rama, is not the only cast member who seems to be faster than the eye and a remarkable martial artist. Indeed, most of the cast seem to be so that when the fists, feet, knees, elbows and machetes and knives fly, it’s hard to catch the breath. The punching, spinning, kicking, slashing, ducking, whacking, gutting, throwing and all out violence – and the film is very, very brutal – left the cinema audience I saw “The Raid” laughing with the outrageous riot of action and killing and as a “wow!” and shocked reaction to some of the brutality and artistry on display. Some may feel that the likes of Terence Malick and sub-genres of experimental films are “pure” cinema, but the action set-pieces of “The Raid” equally understand how purely visual film is, and probably in a more primal and visceral sense. And even if the martial arts genre clichés and weaknesses start to poke out here and there, it matters not. If you are going to use a "next level/boss fight" game-consul structure to make a feature, then this is how you do it. 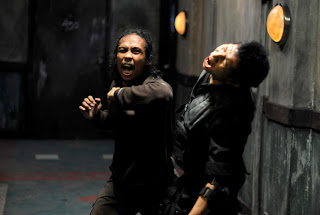 For my money, although each one of the fight scenes is great, the middle half hour that features two hallway fights is exceptional. I am not a martial arts specialist but these fights alone seem to me to be two of the greatest ever filmed in cinema in their speed, dexterity, intimacy, ferocity and editing. They are also broken up by a consummate suspense scene where our hero and his injured colleague try to brave it out in a hiding place in a sympathetic resident’s apartment which only helps to meet the view that Evans knows exactly what he is doing. He does not even make the widely made mistake of allowing the sub-plot about siblings on different sides of the tracks to drag the tale into sentimentality, or that of police corruption to overburden the final moments.

For a sheer rush of adrenalin, choreography, violence and bone-crunching fun, “The Raid” is one of the best. This, people, is how it is done.
Posted by Buck Theorem at 11/04/2012