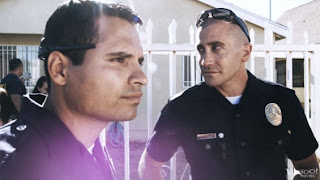 “End of Watch” presents a YouTube, subjective, “found footage” point-of-view aesthetic: the cops we are following utilise cameras – by hand, on their dashboards and lapels – to present the story, which means there is a lot of to-camera addresses. This is on top of the obviousness and redundancy of the opening narration, which explains and stresses that the cops are good guys, that they are heroic and against Evil (“Evil”?); all of which ought to be self-evident. Except that we have a litany of corrupt-cop fiction and fact that seems to require that we have such a disclaimer fronting the film, just in case we don’t quite assume from the outset that the cops are the ones to root for. And: except this narration is on top a dashboard-cam view of a car chase that ends with the cops getting out of their car and, in retaliation/defence, shoot down a couple of criminals and then high-five one another at the kills. So, perhaps without the narration, the goodness of the cops might be felt to be a bit ambiguous; they are a little bit too pleased, if justified. Indeed, it becomes quickly evident that our two heroes are a little too tiresomely cowboyish in their approach to law enforcement because, as nearly every Hollywood production tells us, you have to break and bend the rules and be a maverick in order to get justice and goodness done. Following the law and regulations is for the laughably uptight and cowards. And it becomes quickly apparent that the film buys into this and doesn’t question their recklessness, seeing it as a part of their professional duty. So then the opening narration is to be taken at face value and ambiguities and shades of grey are to be shrugged off; but the fact that it is so obvious and arguably redundant and that the voice-over is a technique never used again belies the confusion of the film’s whole aesthetic.
The cops filming themselves on duty seems a dubious premise from the start and it proves and elucidates not a thing: we learn nothing from the fact that they are filming themselves. But the thing is that the film is not found-footage, even if it superficially seems to be. In fact, after some to-camera addresses, it becomes apparent that there appears to be a third, invisible and omnipotent cameraman running around after them, shoving the camera in their faces and then rushing home to super-edit everything. It is neither one thing nor the other and point-of-views are thrown around all over the place, making obsolete the premise that the cops are filming themselves all the time. There is unintended irony in that - to maintain the conceit of found footage perspective – the gangsters also film themselves (because they are stupid?), which gestures at similarities between the lawless cowboy vanity of cops and killers. What we do get is constant ugly close-ups of faces and shaky-cam that is frequently as nauseating and incoherent as the recent found-footage horror “V/H/S”. Also, there are so many edits – often shots last no longer than a second – that this further undermines the found-footage conceit. We start from a dashcam point of view, but is this the same camera mounted on the bonnet and turned to face the cops so we can capture their amusing bonding-banter? Who knows?
It is up to the performances to save the piece, and indeed Gyllenhall and Michael Peña put in fully winning turns as our pranking, faintly assholish, sometimes commendable and sentimental protagonists. At its best, the film does nod to the casual heroism of our guys, in particular when they dash into a burning house to save children, although the editing is so rapid and random that it’s pretty hard to follow what’s going on other than: oh, they are in a burning house to save children (and, of course, how cowboyish of them too).
It’s an engaging enough mess, guided by on-patrol atrocities and frat boy pranks, cop-movie clichés and good performances. Perhaps the most interesting aspect, which the film fails to capitalise upon, is that these two wannabe maverick law enforcers seem to be getting into something much bigger than they but seem quite clueless to their predicament, even when warned off by Federal Agents. But the aesthetic is so terminally confused by the outset and the tropes so little engaged with and questioned that nothing original emerges from the whole. William Friedkin has said that “End of Watch” may be the “best cop film ever”. No. Head over to Oren Moverman’s “Rampart” for far greater character study, modern aesthetic and complexity (yes, Woody Harrelson’s cop is corrupt, but it’s far more honest depiction of the cowboy-ing cop), or over to Friedkin’s own “The French Connection”, of course. Indeed, watch David Ayer’s previous dramas “Training Day” and “Dark Blue” for better police dramas. We can do with as many respectful pro-cop dramas as exposes of corruption, I am sure, but “End of Watch” manages it only through cop film clichés, policing as YouTube footage and video game p.o.v. shoot-em-ups then topped with cheaply-won sentimentality. It fronts heroism over coherence, perhaps. If the camera had held still for a moment, perhaps there would have been some kind of focus.
Posted by Buck Theorem at 12/30/2012