I am at Frightfest 2013, which naturally means a lot of film watching, a lot of death and destruction for the eye and a huge audience applauding that death and destruction, especially when the bad guys get it. It also means night buses home and compromised sleep, but that's the price you pay. 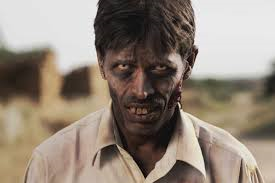 “The Dead 2: INDIA” is a solid, faintly arty follow-up to the Ford brothers’ “The Dead” and it’s likely that if you gave them money to add more countries to their vision of the zombie apocalypse, you may well get a far better on-screen interpretation of Max Brooks’ “World War Z”. Although it is true that some shaky drama and stock characterisation threatens to dampen the fun and the deliberate end-of-the-world gloom, the vistas and uncomplicated narrative momentum make this a fine sequel. The first film, it’s vision of zombies amassing from nowhere in wide open spaces remains eerie, although topped by the vision of people always watching through cracks in the doors – sometimes it’s the doomed looking out and watching the world die, and sometimes it’s the zombies looking in for fresh victims.


Films like “Curse of Chucky” and “You’re Next” prove to be Frightfest crowd-pleasers, and indeed play to please the crowds. Don Mancini puts some creepiness back into the homicidal doll and gets great mileage out of Chucky both motionless and on the rampage. When it gets a little to full of its own mythology and nods back to previous films, falling into flashbacks and multiple endings, it loses some of the plot and plays to the gallery rather than focusing on keeping things simple and dirty. 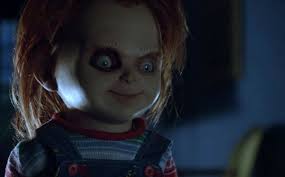 “You’re Next” is sure to be a home invasion favourite and for the most part is endearingly playful with genre. A wealthy family gathering turns into a bloodbath – the film sets up a large cast to bump off quickly before being a bit too pleased with its woman-kicking-butt so that nearly all that remains is an audience applauding every time a final girl dispatching bad guys in a violent manner. But it makes great play with its location and nudges back and forth between black comedy and nastiness deftly. It does success in a few genuine scares and a decent sense of satire about the barely suppressed violence within family units.

Labels: Frightfest, horror, You're Next, zombies

Why do you torture yourself so ;)

Why do you torture yourself so ;)