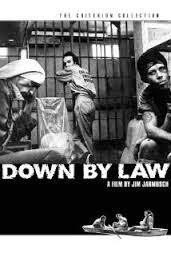 Jim Jarmusch, 1986, b/w, US
This year, Joe Sangre and I saw Jim Jarmusch’s vampire film “Only Lovers Left Alive”, and we liked it but we decided that there was something about Jarmusch’s aesthetic that left the actors looking bad. Was it the dialogue where the vampires couldn’t last a scene without referencing how they had met some renowned artist in history? The final image showed that Jarmusch could do Horror if he wanted to. Perhaps he is least successful when trying to be clever and poignant? Perhaps he was unaware that vampires meeting Famous People In History is a stale Horror conceit, although having high art the domain of hipster vampires was a decent gag. The film is most successful when just travelling around deserted streets in a car, or poking its camera through a bar door to listen to a deliciously haunting singer. 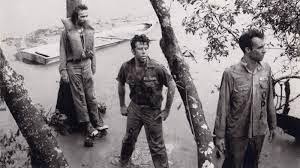 Perhaps that is why his early feature “Down by Law” works so well: it just rambles, and therein lies its magic and realism. I don’t mean that anyone would mistake the compositions and atmosphere for realism, but the sprawling and open-ended agenda feels akin to the unresolved relationships and dramas of life. “Down by Law” certainly feels bluesy and jazzy, loose-limbed and funny because people are naturally funny, but it’s also true whenever Roberto Benigni turns up citing from his book of English the film is a full blown comedy, not just an amusing slice-of-life tale about three guys thrown together in a cell that make a jailbreak. I have seen “Down by Law” many times and it always exists in my memory as a scratchy, pock-marked feature, as amateurish as it is sublime in its modesty. But watching the blemish-free Critereon edition reveals not only gorgeous black-and-white but that perhaps I misremembered the amateurish elements and that in fact Tom Waits and John Laurie’s performances are equally as strong as Benigni: Waits is deadpan but no less funny in a different manner and Lurie holds his own as the straight man. They know that Benigni is there to steal the show – that’s his character, after all – but the film is no weaker in Benigni’s absence. It’s the other characters that stop this from being just a funny film, because “Down by Law” is so much more. Like Malle’s “Lift to the Scaffold”, “Down by Law” seems to capture that blues and jazz mood, that sense of life as a series of coincidences and small dramas that remain relevant to maybe two or three people. But that’s all. It is the smallness and the ellipses that the truth of life comes through.


There is indeed something appealing in the scratched-and-warped vinyl feel of the well-used prints I’ve seen before, but the Critereon print shows “Down by Law” in its best light yet.
Posted by Buck Theorem at 11/01/2014