The Boys From Brazil 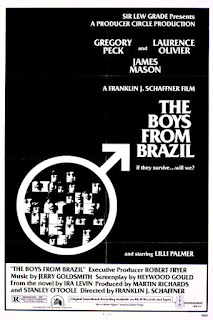 
“Who would believe such a story?” Liebermann (Lawrence  Olivier) asks at one point. Well...


Schaffner’s adaptation of Ira Levin’s novel goes globe-trotting, and stacks set-pieces and villainy as if James Bond might pop up at any moment. The ingenious central idea – cloning Hitler! – is full of morally challenging questions, yet when this could have been a chilling and threatening film, it is simply an engaging but silly thriller sci-fi. The premise wins brownie points for sheer absurdity, but this is severely compromised by broad representations of nationalities and some dodgy accents (“Do you not understand English, you arse?” in the most snobbish and ridiculous London clipped affectation you can muster, for instance). Of course, the cloning premise is perhaps not quite as unlikely as it may have seemed in the Seventies, but there is little grey area here.
But then there’s the showdown. The two old actors – Lawrence Olivier and Gregory Peck, no less, bringing hints of mainstream respectability – set eyes on one another, snarl and then start biting chunks out of one another until bloodthirsty Dobermans break up the fight; then Hitler himself walks in, sees the bloody mess and starts taking photographs. It’s a wonderfully over-the-top, grand guignol moment that’s worth the price of admission alone.

An engaging enough actioner, but a missed opportunity and certainly of the era.
Posted by Buck Theorem at 8/24/2015

The old boys definitely carry it: Liebermann taunting his landlord by stamping on the floor, Mengele going berserk at the party, Mundt's happy meeting with his old Kamerad in Sweden. The boy's unfortunate accent seems to be the result of Hollywood producers' belief that everyone in England (aka Britain) talks like royalty: Robert Duvall's Dr Watson in the otherwise very engaging Seven Per Cent Solution has exactly the same distracting speech impediment.