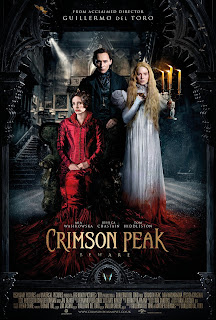 Jake Cole is onto something when he says that Guillermo Del Toro is probably closer to Wes Anderson than his horror peers, although Katie Rife mentions Mario Bava.  And then there’s 12 Gothic flicks to watch before you see “Crimson Peak”. But perhaps that’s the problem:  one may feel this is highly trodden Gothic ground, story-wise, and with that only holding mild interest, the set designs and costumes come to the fore. Indeed, they threaten to smother the story being old – that of a woman being seduced by a man to live in a deteriorating house and her seeing warnings from aggressive ghosts – and as distinguished as they are, their dominance tends to affectation. That’s a pretty dress by costume designer Kate Hawley, you’ll be thinking, distracted instead of being gripped by the plot. Although the collar of a dress that seems to be sprouting mushrooms is probably a bit much.

The film is a triumph of colour-coding, not least of which is a house that sits atop a hill of and is sinking into red clay which rises to the surface when the snow comes. Hence the title. It’s in these details that the film succeeds: a head is bashed in against an overflowing sink, so violently that the sink breaks and the water turns red as it spills on the floor. It’s a moment to rival that celebrated bathroom scene from Del Toro’s ‘Cronos’, but this is followed by characters assuming he simply fell and cracked his head open, which is surely preposterous given the obvious carnage  at the scene. I mean, I’m no coroner or policeman, but…. So where the details succeed, an overall carelessness seems evident and ambivalence sets in. You can see the joins. Oh, the violence is indeed brutal and brings things to life whenever it is onscreen, but again – like the ghosts – it is an element adrift in a story that feels it could exist without.

The oily black and blood red ghosts – referring to FW Murnau’s “Nosferatu” for an entrance - mostly overcome their CGI trimmings to have some effect, but in the great scheme of things they don’t mean much. Del Toro tweeted: “About the Ghosts in CRIMSON PEAK: ALL except for one are entirely REAL actors in prosthetics IN SITU w digital touches.” [Oct. 24-2015] But it’s telling that Del Toro issues an explanation about resembling full CGI creations because audiences will probably react to them as such: if you don’t mind CGI, then there’s no problem, but if you think CGI is too artificial then there’s probably an issue. Near the beginning, wannabe author Edith Cushing (Mia Wasikowska – and that’s right: “Cushing”) says that the story she’s writing is a love story that just happens to feature ghosts, and we’re probably meant to read this story the same way (and that’s not the only moment of meta-commentary). But when the ghosts do appear it’s dangerously close to the James Wan model, cued with musical blares instead of allowing the creeps to set in. “Crimson Peak” isn’t really creepy or scary: it’s too bright for that, but not in a way that achieves the delirium of, say, Argento’s ‘Suspiria’. The ghosts feel more superfluous than woven into the fabric of things: they’re there to spice things up because, well, that’s what Del Toro does. Can you imagine a Del Toro flick without monsters/ghost/etc.? 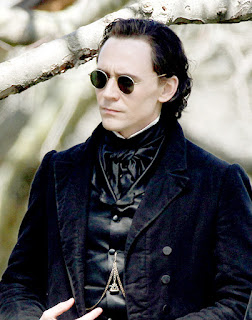 There is nothing particularly understated here, little of the genuine brooding that underpins genuine Gothic. When Jessica Chastain’s clearly psychopathic sister-figure feeds Mia Wasikowska soup to “help” her recovery, the spoon on the bowl scrapes and sings so loud that although the effect is meant to be unsettling, it feels as if someone is over-egging the pudding (and I couldn’t tell at first if it was meant to be read as funny). It’s not that there isn’t subtlety – Tom Hiddleston plays the conflicted Thomas Sharpe for as much sad-eyed ambiguity as he can, for example – but much is so overdone and obvious that it’s like someone trying to do a Guillermo Del Toro impersonation but can’t quite avoid the habits of more obvious contemporary mainstream horrors.

If a film so obviously a Gothic homage is just replicating the tropes and there is no sense of trying to truly subvert them or flesh them out, then a dullness is left at the core. All the flare here is in the visuals, so the story is left floundering. It looks the part but there’s a lack of the feeling. Tonally inconsistent, narratively derivative, aesthetically interesting, ‘Crimson Peak’ doesn’t quite gel and Del Toro doesn’t succeed in bringing the focus of his Spanish language films to his English catalogue. This lacks the foundations of genuine realism from which his fantasies flourish, creating a pretty but lacking confection. 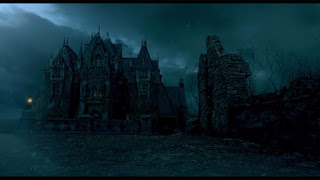