Mongol: The Rise to Power Of Genghis Khan 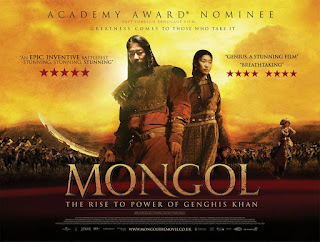 ‘Mongol’ is more John Milus’ ‘Conan’ than Akira Kurosawa. It has gorgeous scenery and photography (by Rogiers Stoffers and Sergey Trofimov), where it is only revealed how pallid the colour-scheme actually is when the carnage starts and blood like ketchup throws bright reds across the screen. Genghis is an expressionless child, rigid with growing, premature masculinity, horribly hunted down by his enemies; then he is a rugged loner hero who we know shall overcome and teach his enemies a bloody lesson. Which he does, but not before we understand that, somehow, it is all to do with his love for his wife which is matched only by his fraternal bonds. Historical accuracy does not seem to be on the agenda for this is too much a ‘movie’, albeit with subtitles. The cues for its drama, heroics, slickness, absurdities and weaknesses all seem such recognisable beats from American cinema rather than Russian. Sergey Bodrov’s film feels like it’s simply taking the biography of the notorious warlord as a pretext for epic film-making rather than insight or education. 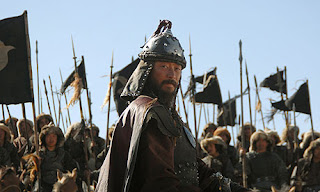