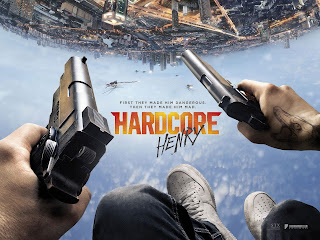 Should you have ever wondered what the first person shooter you play looks like as a film, or if you’ve ever imagined the game you are watching a friend play is cinema, then Ilya Naishuller's ‘Hardcore Henry’ is that thing. Henry wakes up to artificial limbs being attached to his body whilst his wife explains that he has amnesia that will pass, etc. Then just as he’s getting a voice implanted, his revival is interrupted by the bad guys and it’s all running and fighting and killing from then on.

The camerawork is from a stuntman’s point-of-view and sometimes this perspective makes things thrilling – free-running, climbing buildings, etc – and sometimes it makes it incoherent; but the film is quick to recalibrate so we never completely get lost. If you find shaky-cam nauseating, this unyielding p.o.v. may not be for you.* And there’s carnage aplenty, the outrageousness one of its chief gags from the opening credits. If you’ve come for story or insight into the first-person-shooter genre, this isn’t it. Rather, you’ll be impressed at the visual tricks employed to achieve this perspective: Wow, did he just flip from a crashing van onto the back of a bike? How many people is he fighting?? Etc. The other main gag is the comedy turn of Sharlto Copley who plays several roles that range from not particularly good (that Cockney accent is quite bad) to amusing (the military Toff-Brit is perhaps the best, but the weed-smoking character may depend upon how funny you find stoner comedy). The dialogue is also deliberately ungood to emulate the games it’s mimicking. That Henry is constantly running into places that have racks and drawers full of firearms and cabinets marked “Adrenalin” is surely far more successful joke.

Franck Khaulfon's ‘Maniac’ used the first-person viewpoint to elaborate on its themes, to put you as cinematically close to the protagonist as possible, to show the film from his serial killing perspective: with ‘Hardcore Henry’ there is no psychological resonance to tap into because it’s not that film. This is more like dangerous sports: for the thrill of it. There’s a shoot-out in a brothel (of course) and the highlight of a musical routine. The former panders to the worst of gaming storylines and the latter dance routine is the only time that the film really promises to break out from its pastiche. But it doesn’t and your brain would have long since switched off before the final onslaught. As remarkably rendered and relentlessly paced as it is. With a little self-awareness instead of just imitation, this might have been more than just well-executed fun. A full story also might have helped make it more than just an experience. 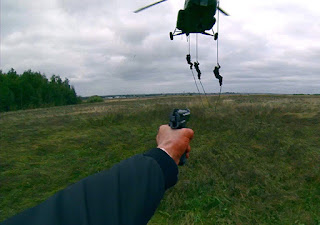 • And normally this may cause issues for me, as I found myself sitting through Tobias Lindholm’s ‘A War’ thinking “Stop trembling the camera! Buy a tripod!” A yet with ‘Hardcore Henry’ I didn’t find this an issue: perhaps because I went in expecting; perhaps because that is the film.