The morning when I thought I might go see ‘Captain America: Civil War’, I popped into my local comic shop where they are naturally and expectedly talking about such things. The comic shop guy was telling someone, “It's the best ‘Avengers’ movie without ‘Avengers’ in the title.” Then Spider-Man was mentioned and someone across the shop called out “Spider-Man is in it for seventeen minutes. Sorry, my Autism just kicked in.” Anyway, the comic shop guy is usually reliable (he’s introduced me to ‘American Vampire’ and ‘Outcast’ and we’ve bonded over ‘Teen Titans Go!’, so that’s all good) and I am sure this moment encouraged me to check out the latest Marvel Universe offering. No, I hadn’t seen the previous Captain America films, but ‘Avengers: Age of Ultron’ had left me cold and, although I have heard it is the best film ever, the first ‘The Avengers’ film had only mildly entertained me. So I doubt I was expecting much from ‘Civil War’.

The plot is set going by the same troubling question of what happens about all the people who die in a typical urban super-battle that triggered ‘Batman vs Superman: Dawn of Justice’, and likewise this argument sets super-friends against one another.* Whereas ‘Batman vs Superman’ simply ignored the moral questions it had initially set up, ‘Civil War’ sidesteps them by having the subsequent super-battles in desolate locations (an evacuated airport and Siberia). It will be interesting to see whether they address this in sequels or if it’s just there to fuel soap opera. There may be a large selection of characters to juggle but the underlying storyline is streamline and the whole enterprise feels more focused and less cluttered than the previous ‘Avengers’ films. Not that ‘Civil War’ isn’t just as eager to please, but it just seems to be actually having fun without making up for any deficiencies by joking around. 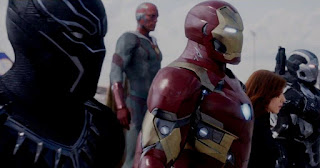 The screenplay by Christopher Markus and Stephen McFeely is nimble enough to layer on just enough plot, humour and angst to keep the action sequences propped up. It’s not confrontational but it does touch upon one of the main questions of the zeitgeist: how far will we go to stay ‘safe’? The colour-scheme is washed out for seriousness but not so shadowy that things can’t be seen (which can’t be said for ‘Batman vs Superman’). The initial street fight in Nigeria seems as much influenced by, say, the Bourne films as superhero films. The action scenes are often inventive, occasionally edited incomprehensibly, but aware of how powers and skills can be used quickly in a battle. The airport fight is good, fast and inventive even if we don’t believe a fatality is at stake (we don’t really believe they’ll kill each other).

Just as the tone has settled, the Spider-Man sequence pops up and it’s funny; then he’s somewhat unceremoniously dumped with a “You’re done”; but it’s a promising introduction to his reboot. The humour surrounding Spider-Man goes to show how self-conscious the one-liners are in ‘The Avengers’ films, however welcome: here, the humour is not about quips but centred in Peter Parker’s naivety and others reactions to him; the jokes are more organic, highlighted all the more because the rest of the film doesn’t try hard to be comedic. Even wise-ass Tony Stark seems subdued here. 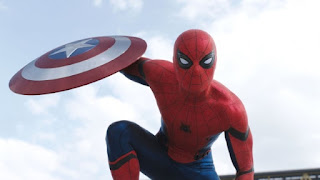 The ending doesn’t rely upon a super-fight between the team and a powerful villain but rather two heroes on the verge of killing one another. If anything, the whole plot rests upon how close heroism is to murder and carnage and ego, etc.; just how close they are to being super-villains. For the ending, you would have to suspend belief that, despite their experiences – which is far and beyond those of your average person – these super-beings don’t have the skills to overcome themselves and their knee-jerk reactions to engage with negotiation and diplomacy. As Bucky at one point says, everything ends in a fight. And being able to physically overcome adversary, whether by superpowers or skills, is what this genre is all about. These entries that pit heroes against each other, as if they are foes, are all about squabbling with friends: they’ll work it out eventually, or at least reach a truce, but meanwhile let’s ask Who would win if? So it’s not so much their mortality at stake but more about watching and seeing what these characters using their abilities going at one another.

No, there is nothing at all original here, but Anthony and Joe Russo direct something that is fun, despite its faux-seriousness, without quite feeling desperate and forced. It doesn’t quite answer the questions it raises (for example, what about the damage they do to the airport? Millions of dollars worth, surely??) but it delivers on the genre demands of emotional super-beings in entertaining punch-ups with dashes of humour and lashings of special effects. 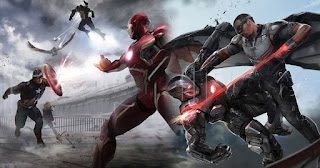 Haven't seen this yet, and we are going to, so I had to skip some of your post-- but I liked the idea of the script being nimble enough to layer on just enough of certain elements, and I'd say that bodes well for me. Thanks!