So FrightFest 2016 finished on a great high indeed with ‘Train to Busan’ and everyone came out very buoyant to stand around for the after-screening lock-in to give a chance to chat and say goodbye. It wasn’t a remarkable year but it was enjoyable as always, because the atmosphere and the multitude of guest make it special. To abandon the real world for a long weekend and to watch twenty-five films with like-minded people is the treat. It's a funny thing that there is a sense of being bereft when it's over, even though we've surely had more than our fill? Also, the fact that Shepherds Bush Vue was all on one level seemed to increase sociability too, as people were for more likely top bump into each other and into the cast and crew of films.

My favourites. In no particular order:

And I found 'Beyond the Gates' highly charming. 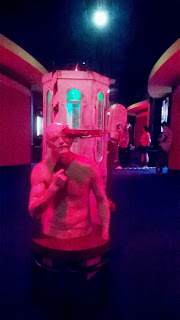 And favourite moments? Well, getting to talk a little to the cast of ‘Broken’ and Ivan Silvestrini (director of ‘Monolith’). People laughing at ‘Blood Feast’ and ‘Sadako  vs Kayako’, especially the dialogue, treating them as more as farces. And then there was the near physical joy running throughout the audience to ‘Train to Busan’. Bumping into friends in the lobby to discuss editing in ‘Johnny Frank Garret’s Last Words’ and the nature of zombies. It seems there were some real treat in the alternative screens – ‘We are the Flesh’ got lots of positive feedback, for example, and then there was ‘Egomaniac’ which evidently handed out promo sock puppets.

·        BEST UNINTENTIONALLY FUNNY DIALOGUE: ‘Sadako vs Kayoko’ provided more consistent comedy, but the biggest laugh was for ‘Blood Feast’ when a new character, apropos to next-to-nothing, asks our crazed cannibal if he’d like to see come all over her face.