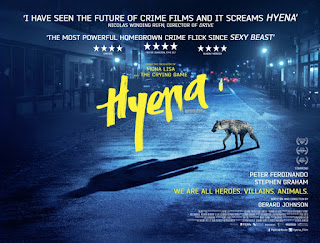 Hey, the police are just as corrupt and despicable as the criminals they hunt. Here’s a thriller based upon that, with crooked policeman DI Michael Logan (Peter Ferdinando) trying to get control of the local irredeemable Albanian hoodlums as well as dodging an Internal Affairs investigation. He does this after he spies the hoodlums murdering his Turkish contact who he was visiting concerning a deal for a drug route. Through a cascade of stylishness and brutality, he gets deeper and deeper in trouble, leading to a wilfully perverse ending.

Nicolas Winding Refn likes ‘Hyena’ – calling it “the future of British crime film” – and one can see that director Gerard Johnson offers up Refn’s favoured aesthetic, similar to Michael Mann’s:  a colourfulness rather than drained-out Britishness; that it thinks that its characters are perhaps deeper than the archetypes they are; that the drama leans heavily on music for ambience. Of course, it helps to have The The making the music (I’ve been a fan ever since I first heard the single “Infected” as a teenager; Matt Johnson is the director’s brother), which certainly sets a mood without being overly intrusive. It is a British crime flick but it’s more Alan Clark than Guy Richie. 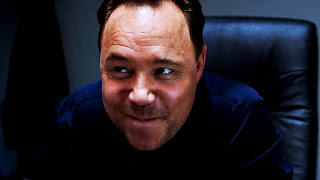 DI Logan’s superiority seems to come from the fact that he’s less boorish than his team, thinks bigger and has perhaps hints of a conscience. In fact, one of the pleasures is seeing how Ferdinando plays Logan as someone who comes across equally as tough guy assured and a sad sack in equal measure. He finds himself trying to help an Albanian woman the brothers are mistreating, but really his interference sets in motion one of the ugliest depictions of rape ever put on film. No, it’s not as explicitly violent as anything in the dubious ‘The Seasoning House’, but its unblinking matter-of-factness strikes more realism and therefore is more harrowing. The film has an unwavering look to much of its atrocities – a hacked up victim; a fire extinguisher in the face; Neil Maskell covered in condiments – but arguably the prolonged rape doesn’t quite convince as qualifying for this approach. The artifice of extreme cinema violence for genre entertainment is one thing whereas a long scene of the sexual violence visited on a woman is another. In the same way, Logan doesn’t quite qualify as truly riveting as the centre of all this, a character drama, despite Ferdinando’s performance. 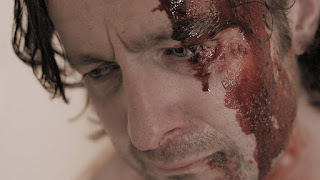 Nevertheless, the colour filtered squalor and brutality and Gerard Johnson’s general intelligence behind the camera keep this fascinating. It’s not really trying for enlightened sociology, or even empathy, but it’s also a million miles from the cartoonish gangsterism of much British crime cinema, even if it’s portrayal of Albanian hoodlums is so thick you could can it. Its true bravado comes with the ending, stopping at the point where our scummy protagonist doesn’t quite know what to do, knowing he’s probably damned no matter what.