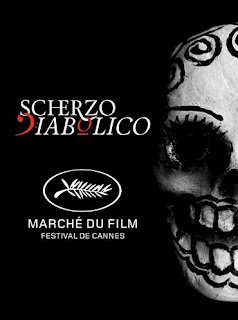 Bogliano’s films seem cursed with superficial misreprentation when released in the UK. Metrodome's cover for his excellent ‘Here Comes the Devil’ makes it looks like some ‘Omen’ derivative when it is anything but. The general packaging of ‘Scherzo Diabolico’ highlights the “sexy schoolgirl as captive (foreplay edition)” angle when the film itself is very careful concerning this, for she is not kidnapped for sex. The packaging even has her sucking on a lollipop. And the title 'Evil Games' sounds like the name was taken from a horror pick-and-mix. 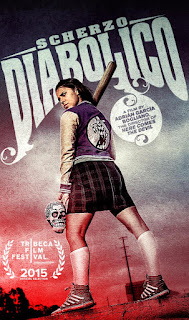 Perhaps this speaks of the slipperiness of Bogliano’s ideas: on the one side they are lodged in established horror tropes, but on the other he is playful and tweaks those tropes so that the finished product is not so cliché. When I first saw ‘Scherzo Diabolico’ at “Frightfest” I had no idea that it came foregrounded with the schoolgirl-with-a-baseball-bat image, so when Daniela Soto Vell turns vengeful psycho it was quite unexpected. Now that image is the thing that makes this saleable without the finesse that the film exhibits. This means if you are there for the kick-ass schoolgirl, you are bound to be disappointed because her vengeance is not fully heroic. And Francisco Barreiro’s motivation is not sexual but more ambition and monetary as it is all in his plan for promotion (even when he takes nude photos, it is more inspired by the desire to ruin his boss). 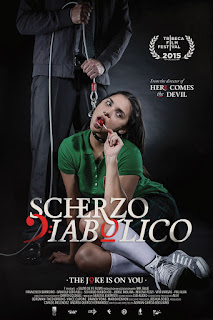 The pace is fast and elliptical: this means that it may take a scene or two to recognise exactly what has happened; motivation is not spelt out from the start therefore leaving many possibilities open; the skipping over overt explication – dialogue is secondary – means also that plot holes can be mostly hop-and-skipped over. Bogliano keeps things semi-elusive, brisk and quirky, full of eccentric moments such as the wife returning from a party in a Wonder Woman outfit, or the abduction taking place in a vibrantly graffitied alleyway, or his abductor’s mask looking like a Day of the Dead prop. Bogliano’s scripts are also mean and cruel in the best horror tradition and therefore leave an upsetting aftertaste: it’s like he doesn’t just see horror as something that happens to you but as an external force toying with you.

IMDB tags it as a comedy (!!) which speaks of the black humour that lingers in the air even though there is nothing funny on screen at all. It’s in the tone of things, the way that Barreiro uses his son to calculate the weight of a body, for example. But then it moves almost without warning from cruelty to gut-wrenching brutality before ending on a note that won’t let you think it’s funny at all.

The thing is deceptive marketing only helps to sell to those who'll be disappointed and then sell it on as second hand ... but I guess that's the point. Just like most trailers that sell a product on cliches. The thing is, Bogliano's films are already so rich in imagery that it surely takes more effort to manufacture the wrong impression. Not that they don't possess exploitation basis but the packaging doesn't even try to capture the off-kilter sophistication. Pfft.

Off the top of my head, I'm also thinking of "Can't come out to play" as faintly misleading for McNaughton's re-titled "The Harvest" (a far more evocative title, surely) and then there's "Troll 2" (which has not trolls, just goblins)... oh, I am sure there's a bookload of deliberately and lightly mispackaged films.

Same with books. I remember being baffled that James Herbert's amiable comic fantasy Fluke was sold as a horror novel, and several of Patricia Highsmith's books which were either purely nominal crime novels or not crime novels at all were sold as crime novels because, well, marketing. When Carol was reprinted soon after her death in the 1990s, in most bookshops it went straight to the murder shelf.