Well I can imagine this one is going to be divisive, perhaps more so than ‘I am the Pretty thing that Lives in the House’. David Lowery’s fantasy starts off as one might anticipate from an artsy-fartsy version of a traditional supernatural tale: the central couple C and M (Casey Affleck and Rooney Mara – and yes, dig those initials) are educated, privileged, talented and, of course, slightly angsty; scenes last a little too long, edging into pretension, and become their most testing at the pie-of-grief scene, which veers into Tsai Ming Liang levels of endurance. He dies and comes back as a ghost, watching life in the house go on and the editing speeds up a notch as the narrative starts to play with time. She’s moved on but he can’t.

He’s one of those sheet-draped spectres – which I think has been credited to MR James’ story ‘Oh Whistle and I’ll come to you, my lad’ – which is both creepy and cookie. That’s the gag, that Casey 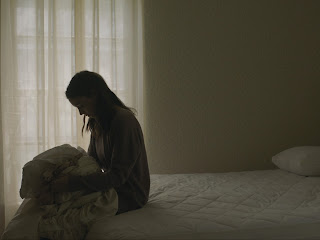 Affleck is rendered mute and anonymous under a sheet (is that him?). He is mostly passive, just standing around and observing, but becoming a poltergeist when he decides a couple of kids are perhaps too playful; after all, we aren’t shown that he is similarly troubled and troubling when adults next move in and throw a party. In this scene, he watches as Bill Oldham (Billie “Prince” Billie) engrossingly profounds on the ongoing meaninglessness of it all (he’s billed as “Prognosticator”). But it’s the cookie element that really sticks out when two ghosts “chat” through subtitles: it reminds me of some single-panelled cartoon with an obliquely humorous caption. As Phil de Semlyen says, “if you’ve ever wondered what Terrence Malick’s Rentaghost might look like, there are worse places to start looking” Or maybe, given its boxy framing and filters, it’s like a spooky Instagram picture come to life. It’s almost a cute view of ghosts, being deliberately designed on the most innocuous symbolism of afterlife entities (but of course, tell that to Michael Myers). So it is not scary – although his haunting the kids and turning into a poltergeist almost pushes that (and what did they do exactly? Wouldn’t his girlfriend’s new lover provoke such a response beforehand?) – but it’s often creepy.

And about that pie scene? 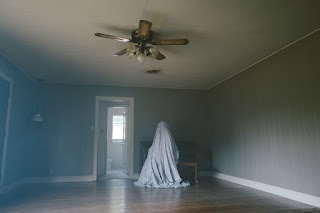 "I wanted a representation of grief that we haven't seen before ... that felt unique and uncomfortable and profound," says Lowery, who previously directed Mara and Affleck in 2013 romance Ain't Them Bodies Saints. "I thought about how sometimes when I'm upset, I just eat a lot. I thought that would be a really powerful image."
USA Today

Uh-huh, but we get the point pretty early on and that device of prolonging a scene to ridiculous lengths to make it poignant is nothing new to anyone familiar with Tsai Ming Liang or Bela Tarr or Sergio Leone, etc. Many find ‘A Ghost Story’ a meditation on time and loss and grief and so on, but its vision of grief and the after-life is conventional, offering nothing new and playing on established depictions of sad but benign hauntings. It’s as deep as a commercial for making wills for the people you leave behind, its sadness surely derived from a somewhat self-absorbed interest in being an audience to a loved one’s  grief once we die. The spirits of loved ones can’t move on until they reach some kind of closure; but the temporal playfulness pushes this theme to a conclusion where a future context seemingly cannot contain ghosts* so they have to go back to the past and start again. It’s this playfulness that mitigates it’s pretentions to produce a goofy resonance.

‘A Ghost Story’ is often very pretty, using ellipses to issue surprises – the house is now being demolished; now they’re all dead with only the hint of Native American war-cries in the distance – and Daniel Hart’s evocative score keeps things ebbing and flowing. Its oddness is in its favour. It is a singular mood-piece – Tarkovsky’s ‘Casper, the Maudlin Ghost'? – with much to offer if you go with its conceit. And Affleck draped in a bedsheet will prove unforgettable.


• Affleck haunts a boardroom meeting momentarily before seemingly committing a ghost-suicide, implying the business world will blot out the past and ghosts. 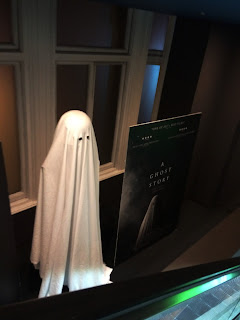 The display for 'A Ghost Story' at Picturehouse Central, Leicester Square, London.