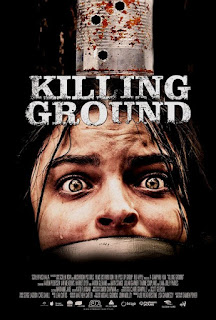 Perhaps the one film I saw this FrightFest unmitigated by humour or otherworldly elements that truly tapped into a sense of dread. Here’s another horror to put you off ever going on holiday. A couple go to camp in a remote spot by a lake, but there’s another tent and we see that other family going about their holiday too.  And perhaps it takes a moment to realise that we are in fact alternating between two different time zones, Power crediting the audience with the skills to follow what’s going on even if it is not immediately obvious. 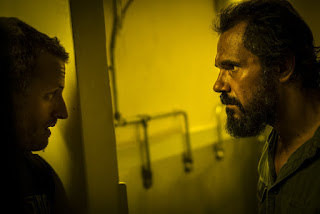 The slow-burn of the opening half reaps rewards for the last act when tension is held and no easy get-outs are given. As I went in not knowing anything about this, there was even a moment when I thought it was supernatural (the kid toddling in the background seemed otherworldly, and I wasn’t the only one that thought this), but that isn’t the case. Rather, this is as you would expect but it has an excellent ensemble cast with a central couple whose affection is naturally conveyed and some bad guys who fall short of being cartoonishly drawn: in fact, their sadism is all the more discomfortingly for being innate and casual.  It succeeds in being upsetting and convincing. The buzz of talk afterwards in the cinema once the credits ran seemed notably loud for this one. Gruelling.

A zombie invasion as seen from the claustrophobic point-of-view of a man trapped in an elevator. Claudio’s a bit of a git, so there’s room for a character arc even as the office he sees from ajar elevator doors descends into undead mania: he may not be able to get out but they can’t get in either. Alessandro Roja holds the attention as Claudio, making the most of arguing, patronising and then sympathising on the phone with various people, as Misischia and cinematographer Angelo Sorrentino manage to keep the confines of the elevator interesting. . The title is maybe a bit awkward – apparently FrightFest’s own Alan Jones suggested it from the original Italian title ‘The End in One Day’ - and perhaps implies a bigger scale that is only seen when closing. As an allegory for Claudio’s stalled state – between the needs of his wife and the brain-dead carnalism of the office – it holds some weight but it doesn’t find anything new or creative to do with the zombies and that is a major disadvantage. But as far as High Concept zombie devastation, it’s a decent entry. 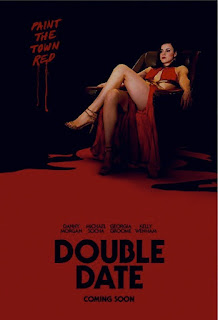 Alex (Michael Socha) is determined to help his pal Jim (Danny Morgan) lose his virginity before he hits thirty. Meanwhile, there are a couple of women who need a virginal sacrifice for a ritual, and they’re running out of time.

Initially, it’s the kind of boys-stuff premise that would leave me rolling my eyes, but Morgan makes for a likeable protagonist and although Socha starts out as the annoying mate, his cluelessness and Socha’s comic timing soon prove the film’s secret weapon. As with ‘Game of Death’, ‘El Bar’, ‘Mayhem’ and ‘Better Watch Out’, setting a time limit on events keeps thing focused and urgent: the guys meet the girls and think their luck is in, embarking on what they think will be a night of potential fun. This involves a comical birthday celebration and a visit to a hilarious Dexter Fletcher.  Georgia Groome as Lulu gets to angst about what the sisters are doing but Kelly Wenham doesn’t get much else to do but be bad-ass; and it’s true that they don’t really get the comedy. 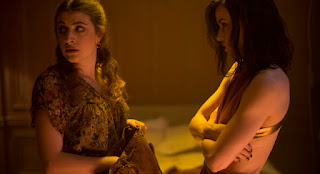 They know they have the upper hand when the guys are obviously so needy but it’s the awkwardness of the men that proves the true source of amusement. It’s consistently funny and even manages to handle a fight between a man and a woman without making her indestructible or losing his befuddlement. It works as an allegory for thinking losing your virginity will be both farce and horror story (with additional disapproving father-figure) and balances both by being highly likeable. 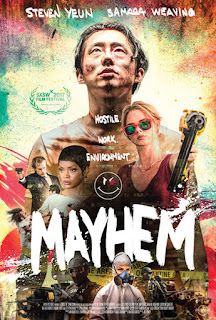 Where the crowd-pleasing is so evident it’s almost desperate. We hate the dog-eat-dog world of office politics, right? Well here it’s aided with a contagion called ID7 that makes the infected super-violent, offering a get-out-of-jail-free card for a tale of butchering your way to the top. Our hero is Derek Cho (Steven Yuen) who supplies the narration/exposition and who we can cheer on as he slaughters those who have framed and mistreated him as the virus takes over and the building is sealed off until the antivirus takes effect. The violence and gore are of the slapstick variety while the satire is just as subtle: the super-violence and caricatures here are the source of laughs. There’s mileage to be had envisioning the office as an arsenal and a warzone but it’s all very obvious, which isn’t necessarily a bad thing, but there’s surely a queasy aftertaste when it posits a world where murder and carnage end up meaning very little. It’s fun while it lasts but it’s not as clever as it perhaps thinks. 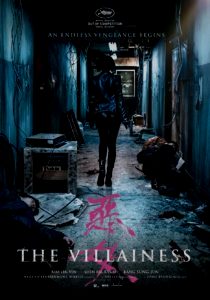 You know all this from the examples set by the likes of Park Chang Wook and ‘Lady Snowblood’: a female assassin out for revenge and so on. It’s brilliantly made and elegant where Western visions of this tend to be blunt; but where this differs is in its use of p.o.v., the kind that defined ‘Hardcore Henry’. This perspective delivers a bravura opening where Ok-Bin Kim mows her way through a corridor of bad guys (then she looks back at the trail of corpses and the audience broke into applause) which we see like a first-person kill-game; then her head cracks against a mirror and the p.o.v. is jolted into a more detached camera as if we are being smacked out of her head. The film never quite tops this moment of fluidity between perspectives again and indeed, later, there is a sword fight on speeding motorbikes whose jaw-dropping qualities are compromised by the fact that the camera can’t stay still enough to show fully the skill involved. But ‘The Villainess’ delivers what you expect – a sniper in a wedding dress, anyone? – even to the point where it’s familiar story of a girl trained to be a killer when she grows up, with all the requisite deceptions, betrayals and unexpected romance, is all a bit more mixed and complicated than it necessarily needs to be. It’s the polar opposite of Hsia-Hsien Hou’s ‘The Assassin’, but it’s fun and often exceptionally well-made, even if it is nothing new and it can’t quite hold the camera still when it needs to. 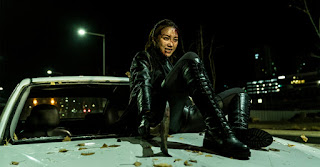