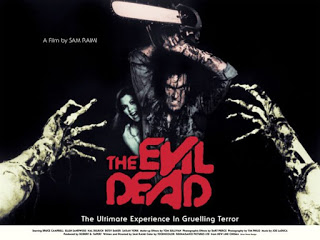 When I was a kid, the TV spots advertising ‘The Evil Dead’ terrified me. That witchy-demon banging around and glaring up from the cellar truly intimidated me, enough that I had to steel myself every time the commercial ran. 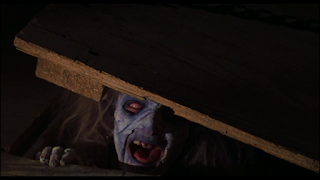 1981: Seemingly armed with nothing but a cabin in the woods and a smoke machine, Sam Raimi used these to try out his technical gusto and to make horror history. Ash (Bruce Campbell) and friends go to the isolated cabin to get away but find themselves at the mercy of demons with a pretty slapstick sense of things. Although the comedy and the Cult of Ash would take over, there is a d.i.y. and transgressive edge that feels rooted in Seventies exploitation cinema so that those features, at this stage, remain sly gags. Details such as the mirror that turns to water edges into the kind of surrealism that ‘Phantasm’ excelled in (but it’s true that the Book of the Dead looks like something your Heavy Metal mate might have drawn in a school text book). There’s plenty of invention and detail all round – in using a pencil for a demonic assault and blood giving a projector a red filter, for example – to show how Raimi’s debut earned its reputation. It may seem ridiculous now to think a horror so obviously influenced by cartoons and slapstick could spearhead the “Video Nasty” phenomenon, but there is the wrong-headed tree rape and a genuine sense of the unhinged to indicate how people that didn’t understand the genre would be outraged. That, and enough splatter, dismemberment and stop-motion to really push things as far as they can go. And the camera hurtling through the trees as a demonic force still remains a simple but unforgettable horror technique. The tree-rape is an unnecessary misstep, though and the whole thing just narrowly misses a subtext of fratboys-take-girls-to-cabin-and-the-girls-are-nuts! There’s an overall gonzo humour that somehow circumnavigates anything just being offensive. Even when you are clued in to its full throttle rhythm, there’s a pause and stillness to the stop-animation at the end (probably the only notable stillness in the film) that taps into genuine eeriness. Very few films feel this kinetic, like a sloppily aimed punch, and despite its gleeful pell-mell liquefying into outré slapstick, it still holds onto something intrinsically scary, unnerving, bizarre and outrageous. 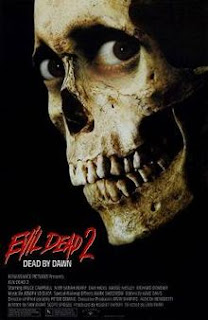 ‘Evil Dead 2’ (1987) is a rewrite of the original as a more straightforward comedy of madness. The use of green blood is always telltale sign of compromise but even so, this sequel is the equal to the original in breakneck invention and punk-brat fuck it! agenda. This is how you revisit/reboot/remake an original (rather than Fede’s Alvarez’s 2013 bland/terrible ‘Evil Dead’). There’s a place where bad dialogue and so-so acting won’t matter, and this is it. Bruce Campbell is admirably game and mugs his way dementedly through it all with verve to match the film-making as it just heaps more and more upon him. Perhaps the bigger budget means it’s descent into giant demon heads is unavoidable, but the first half especially excels at depicting one man’s elevation into insanity through cartoon excess. Apparently all this was in lieu of Raimi’s original intention of a 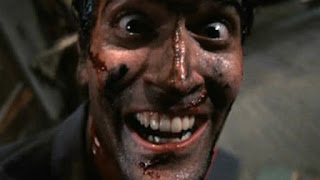 medieval dead which the budget couldn’t stretch too – which we get to next – but there is no disappointment in this sequel just regurgitating more of the original. We know the tricks but Raimi shows he can pull it out of the hat a second time with no problem, showing the original was not a fluke. 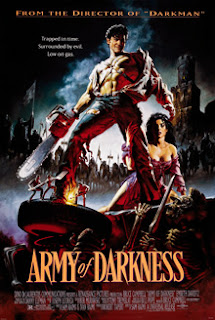 And so time-travelling we go: ‘Army of Darkness’ (1992) is fully defined by the Cult of Ash and makes ‘Evil Dead’ a joke. I mean that both as summary and detrimentally. Apparently this is what Raimi had intended all along with the concept, but now he had the cash to do it. The “Deadites” hold no mystery or disturbing qualities here, although there is fun to be had in their designs. If the original brashly held the coat-tails of slapstick and horror and the sequel still maintained fidelity to this, this third installment is some weird Harryhausen tribute mixed with satirical macho posturing. This is nothing like a continuation from the Ash from the first two films: he wasn’t much of a character but he was sympathetic and put upon and we could relate to his descent into insanity. The constant Bruce Campbell-bashing was a fun in-joke; he is charismatic without having to do much. But ever since he uttered “Groovy!” it’s been a descent to what he is here: a privileged wisecracking asshole who’s supposed to be funny because of it. It’s that thing where his overt machismo is at once parodic and 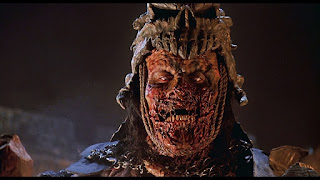 wallowing in itself. “Gimme some sugar!” and so on, you can quote later. But his wisecracks aren’t funny (your-mileage-may-vary) and it coasts on the Bruce Campbell mythology which has now taken hold – here’s a mini-Ash army; here’s his demonic double – and it isn’t scary or unnerving at all. Of course, it isn't meant to be: it's a romp. It holds some weight as Ash’s narcissistic manic nightmare, but it’s also caricature over character. There are times when it feels decidedly amateurish, badly lit and juvenile, and perhaps it has the same zest of its predecessors but the invention here seems self-indulgent. Luckily, there was plenty more good stuff to come from Raimi. 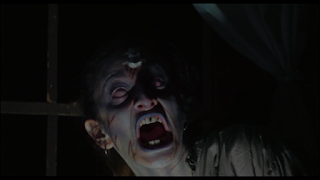