Godzila: King of the Monsters 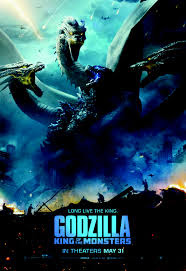 So, I recently gave ‘Kong: Skull Island’ another whirl, thinking I may have been too hard on it previously, but a second watch didn’t sway me. There was still something in the drama that aggravated me (and I didn’t change my mind that Samuel L Jackson is just tiresome in it, coasting along as if aggressively bored, as if he is determined not to have fun with the rest in a giant ape movie). But in retrospect it had good monster fights and had a nicely tropical feel.

By contrast, ‘Godzilla: King of Monsters’ insists on being dark and drained and moody, even in the daytime. It often follows on from Gareth Edward’s 2014 ‘Godzilla’ in having the monsters so glumly lit and in the fog of battle that on occasion you wonder if you are actually watching monsters at all. When the screen is lit up, it with the orangey hue of dying cinders. Sure, there’s a large chunk of the city caving in but: monsters? In ‘Kong: Skull Island’, it was brightly lit in dazzling sun so you could see it all. So, you know, there isn’t the excuse for underlighting for hiding any defects of CGI. And digital effects have some so far now that the monsters are magnificent: see the way Godzilla falls into a gorilla’s mannerisms Actually, King Ghidorah probably steals the show.  And maybe that’s also the thing: CGI is so awesome sauce all the time now that it’s hard to be dazzled just by one computer-generated marvel punching down on another. But when you have men in suits or models, there’s charm and mortality that CGI just doesn’t have. There’s a need for more narrative invention for the monsters and to the fights. 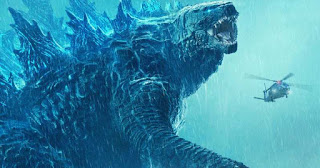 For example: Edwards’ ‘Godzilla’ had the parachute jump which nearly transcended the format for a moment: and when Godzilla lights up and gives an impressive light display, all the chiaroscuro made sense. ‘Kong: Skull Island’ gives Kong two great entrances: twice, Kong emerges as other narratives are playing out so that his appearance is unexpected and thrilling. Kong versus the helicopters is a peak for monster battles. It would seem there’s now a studio directive that the monster must appear in the first act so as not to lose the attention-span deficient, but in ‘Godzilla: King of Monsters’ in his introduction he’s just there, demolishing the city; it’s an introduction that’s barely trying. Later, there is maybe one notable fight with Rodan versus the jets: if there is one transcendent image I take from the film it is Rodan spinning in flight to destroy the fighter planes. Oh, and King Ghidoran atop a volcano with a cross in the foreground like a painting of the devil by an old master (and from this you could theorise the film is drawing a line from these ancient titans to the development of religion… but that doesn’t lead too far). But, yeah, we see the tremendously impossible all the time now. Michael Doherty’s previous films ‘Trick’r’Treat’ and ‘Krampus’ were far more alive with attention to detail and quirkiness.

So: secret organisation Monarch is hiding and monitoring these titans/Kaijū and bad government folk are interfering with things they don’t understand, and then a rogue eco-terrorist group (*raise eyebrow*) frees the titans to risk the world of the plague that is mankind. But they too are messing with things they don’t understand. King Ghidorah takes centre stage and impresses. Rodan gets his moment. Mothra too. The other monsters… not so much. And all this is to now cast Godzilla as a good guy, an apex predator that keeps the others in line. He often appears (tiresomely) just in the nick of time, then King Ghidorah kicks his arse… in fact Godzilla has to be revived a couple of times to continue the fight until he’s a deus ex machina. It’s enough to make you doubt his awesomeness. 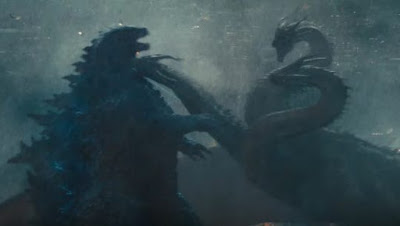 But what is most unforgiveable is that when a monster fight is going down between Godzilla and King Ghidorah, we focus on the humans and are supposed to care about the family reunion of the perfunctory human interest. And they aren’t that interesting. It’s a waste of a decent cast. Yes, big monsters are fighting just like mommy and daddy, and now mommy and daddy are making a truce for the daughter - but we’d rather watch the monsters. That’s what we’ve paid money to see. Any splendid stuff just dries up. I mean, even 'Shin Godzilla' made me fairly interested in the politics of it all, so there's no reason for being rudimentary. 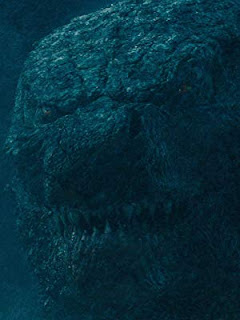 Unkle Lancifer at Kindertrauma gives all the positives but I was left with a feeling of being underwhelmed. Of course, the argument is that aside from the seminal original, all the Godzilla films suffer from silliness and negligible human representation, and that’s undeniably true; but there’s a sense when I go to see a new gorilla-whale film with lots of money and skill behind it, I am thinking maybe this time, it will truly raise the bar more than being half decent. I don’t want to see a mega-budget film with the same flaws because then it just comes across as not caring enough and doesn’t have the same charm. 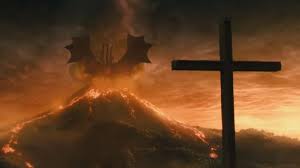 There’s a sense these films are just coasting. But there will be some interest is seeing how the tropical colours of Kong conflict with Godzilla’s drained look in the inevitable ‘Godzilla vs Kong’.