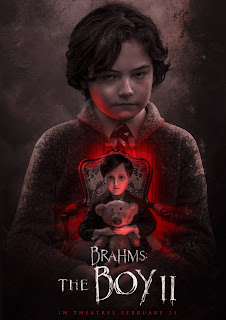 You know how the original ‘The Boy’ was distinguished because you thought you were watching THAT film, but actually it was THIS film? ‘Brahms: The Boy 2’ just goes, “Hey, let’s just do THAT film!” Therefore, it doesn’t demand anything from itself besides a tedious explanation  from a web site - which now replace libraries as the bane of horror mysteries - to shove away the distinction of the original. So, it’s a little disrespectful in that particular way sequels have. For two thirds, it is slick and intriguing with everything solid but unexceptional: the mother and son are trying to recover from the trauma of a violent burglary, and the son isn’t coping so well. And of course you have the "Paranoid Mother" trope. But the third act and revelations descend into silliness and no pleasing sleight-of-hand. It is disappointing coming from the same director and writer team of the original.