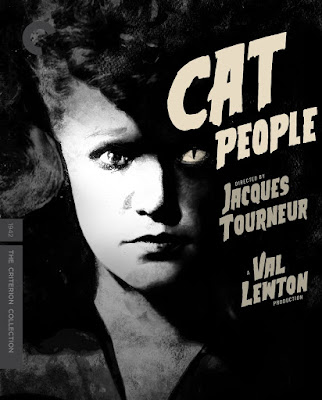 Tourneur’s alternative were-tragedy is a svelt and elegant tale about how sexuality and jealousy makes one woman dangerous. Certainly, Irena is quite charming, sweet, smart and endearing at first – Simone Simon barely seems capable of raising her voice – and that means she is appealing intellectually and disarming. And she’s a Serbian immigrant and therefore exotic, so it’s easy to see how a decent enough all American chap might fall for her. She has a warmth and vulnerability that commands empathy throughout. But this foreignness also comes with troubled ancestry and a delusion that, when this exotic sexuality is tapped, she’ll become a lethal panther. This becomes a problem when she senses her husband falling for another.

But there’s nothing mean to our central love-triangle: there’s a definite maturity to DeWitt Bodeen’s screenplay. When Oliver Reed (Kent Smith) must tell Irena that he’s fallen for someone else, he doesn’t blame Irena for being difficult or stringing him along, but it’s with regret and acceptance of responsibility. Also, Alice (Jane Randolph) isn’t some love rival drawn bad, but often suggesting the more sympathetic actions when dealing with Irena. Moira Wallace writes that “Simone Simon seems by nature to be more kitten than were-wolf”, but that is surely the point, that Irena isn’t a siren seductress, a femme fatale to anyone but herself. After all, “She never lied to us.” 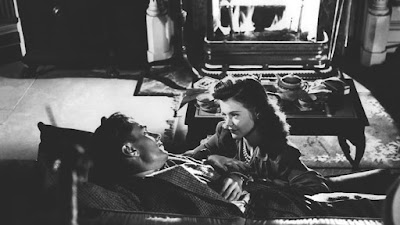 It’s a text wholly built from fear and phobia, from a woman’s fear of her ancestry and sexuality, and of her loneliness and her place in social convention. Undoubtedly also due to budgetary constraints, it nevertheless evokes the eerie and uncanny with a success that a film with more resources probably would not have achieved. Secondarily, it’s the male fear that a woman’s troubled sexuality can’t be trusted, perhaps especially if it’s foreign and exotic. And there is also the hint of lesbianism, not least when a stranger calls Irena “Sister”. It’s also notable that it’s Alice that first believes in the threat and powers of Irena, without much hesitation when she’s confronted by weirdness, while the men mostly patronise, disbelieve and consign Irena to insanity. The men can’t quite see pass their own agendas, and in Dr Judd (Tom Conway), his assumption that his privilege and gender trump all is a wrongheaded arrogance. There are forces at play here that the very straight characters outside Irena are barely aware of.

The film’s major laziness is in suggesting some makeshift cross and Christian declaration might fend off something so primal, as if the film thought it was a somewhat more traditional supernatural monster movie fighting off a pagan threat (and although this can be attributed to Oliver’s beliefs, the film does seem to play along). But the bus moment is one of the genre’s great jump-scares, and there is something truly primal and fearsome in the similarly iconic swimming pool set piece. Rob Aldam writes,

“Largely overshadowed by Paul Schrader’s inferior remake, The Cat People is a milestone in horror movies. The way Lewton and Tourneur use shadow in lieu of an actual monster completely revolutionised how films are made. There’s so much more malice in a fleetingly glimpsed silhouette than revealing all your cards to the audience.” 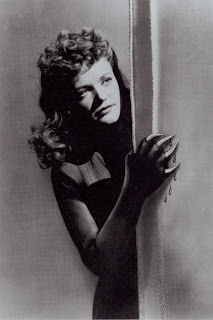 The use of shadows and light are exemplary throughout, shadows becoming bars and obscuring the monster and monstrous so it is always lurking and pending. Tourneur and cinematographer Nicholas Musuraca worked on film noir before and put the chiaroscuro to the best evocative use for horror. ‘Cat People’ successfully conjures the uncanny and abstract anxiety, those elements that touch the everyday, perpetual engine of the genre.  The monster revealed is our own fear of ourselves. It’s certainly a text for those who feel like outsiders, even surrounded by decent, sympathising people. Paul Schrader doesn’t think of this as a remake of the Jacques Tourneur classic, which he doesn’t seem to rate, and seems to think the inclusion of a mysterious lady saying “My sister!” is his homage to the original; but it riffs on the swimming pool scene and the famous bus jump-shock and in that way follows similar beats to the original. Schrader’s take is very different and earns that contentious label as a “re-imagining”, but to reject it as a remake is surely a little disingenuous.

What it does do, like Cronenberg’s ‘The Fly’ and Carpenter’s ‘The Thing’, is to take a beloved source material and update it successfully, bringing what was all allusion and suppression in the originals to the surface. For ‘Cat People’, that means all the kink and sleaze and dodgy sexuality is front and foremost. And surely Natasja Kinski nude was a selling point, although this was also in McDowell’s nude period. Oh, and to add incest too. Kinski’s offbeat sexual appeal where she goes from innocent to seductress when discovering she turns into a panther when primal urges are released by sex certainly centres the film. She hangs between Malcolm MacDowell’s sleazy incestuous perversity and John Heard’s wholesome All American machismo. 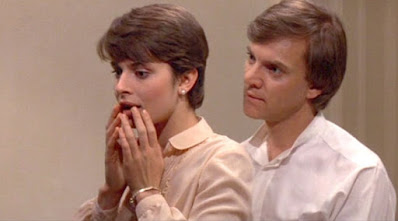 This was slightly side-stepped in the shape-changing cluster including ‘An American Werewolf in London’, ‘The Howling’ and ‘The Thing’, perhaps because it wasn’t funny or satirical or outlandish, but I always put them in the same pot. The highpoints are McDowell’s creepy leaping on the end of a bed, the arm being pulled off, the unforgettable desert scenes and Giorgio Moroder’s quintessentially Eighties pulsing synth-score: I even think of the orange tint to the dream-desert sequences as an Eighties orange. The score is one I have listened to ever since. Its weaknesses are a couple of moments with female victims that wouldn’t sound out of place in ‘The Man With Two Brains’, and the iconic pool scene that, here, seems to imply that Irena can transform at will, which isn’t in the rules of this version.

The sexuality in ‘Cat People’ walks a line between arthouse and exploitation and its actual standpoint a little hard to pin down. Sexuality is primal, unleashes the beast and perversion: even the ostensibly nice and normal sex between Irena and Paul leads to bondage. Based on this, Gary Arnold calls a Schrader “an exploitation director with delusions of grandeur”,  but that seems pretty self-evident, and hitting that sweet spot between conceived “high” and “low” art is genre privilege. ‘Cat People’ is a near-miss, but still intriguing. 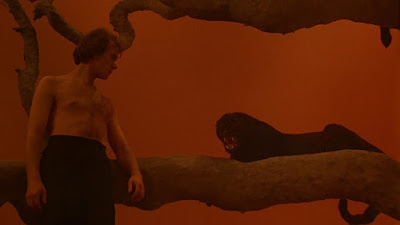 The ending signals tragedy, and it is conceptually better than the run-of-the-mill monster movie ending that Schrader talks of, but it also symbolises a woman’s sexuality being caged up by a man for her own good, and by her own choice. There’s an uneasy murkiness here, but the elements of arthouse and exploitation tame one another to produce something that is quite unique, and certainly beguiling, despite and because of its crude edges and pulsating Eightiesness.

As I remember, the pool scene in Schrader's version comes at an interesting point, after Irena has had her dream of the desert tribe. The scene is from Alice's viewpoint, and I don't think we're shown enough to conclude that Irena has actually transformed - which would, as you note, be inconsistent with everything else we're told about the process. I see that scene as showing that Irena has begun to understand and accept her predatory nature and, without shedding her human shape, is flexing her claws a bit by scaring her rival.

You're right, of course, but this is where my accusations of "murkiness" comes in, because- according to the "rules", she shouldn't be able to transform, and yet the rips in the clothes look more claw-like than knife-like. Of course, that's debatable and we aren't really given enough information to know. It's a fine moment, as it's tracing the original iconic scene, and as a teen I had no doubt that she had transformed (in the original, that's a given). But as an adult concerned with internal logic, it raised questions...

But this doesn't scupper the film, of course, and it's atmosphere is unforgettable and it's a fascinating spin on the material.