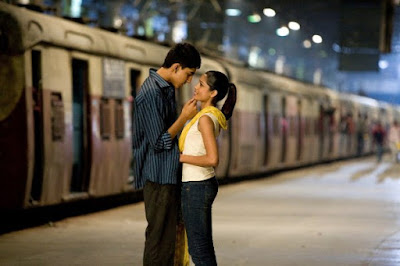 1 - DANCING AND DENIAL:
Danny Boyle says that he didn’t see the dance sequence in "Slumdog Millionaire" as a homage to Bollywood. He says it is because you can’t go to India and not dance [1], which, although obviously spoken out of some appreciation joy derived from his time there, can’t help but strike a condescending chord. It also echoes Danny Boyle denying that his "23 Days Later" is a zombie film. Is it possible that the lightness of touch Boyle has with dark subject matter - which can be an asset - comes from a kind of benign self-denial of the roots of some choices? Is he really oblivious to genre convention? "23 Days Later" may be as he says "a thing in itself" [1], but it still has antecedents and works within a given genre: even if Boyle does not want it associated with Romero’s flesh-eaters, the violent plague of "23 Days Later" is preceded by Romero’s "The Crazies", at least.

Whatever, and it really shouldn’t work, but there was a cry of joy from the cinema audience with whom I saw "Slumdog" when the dance routine started. At the time, I myself was a sucker for it. Breaking out the Bollywood moves really should have been a terrible lurch to applauding oneself - but somehow Boyle pulls it off, perhaps because by the end of the film it has completely frothed up and spilt over and pretty much anything goes. It also provides a strong clue as to the karaoke-style emotional triggers and playing-to-the-crowd intentions of this Oscar winner. I am willing to bet that there is a catalog of Bollywood films to which fans could find similarities and references. "Slumdog" really is quite a remarkably successful pot pouri, the ingredients of which Boyle’s seems cheerfully in denial about, where any blandness of concept is resolved with a little sprinkling of Indian spices. He’s watched Bollywood and Zombie films, but his films aren’t them. It is a thing in itself. It is, actually, a thing of many other things.

Boyle comes across as highly amiable and full of good intentions, and I am sure that is shocked by the accusations of racism inherent in the film. What he surely sees as his tribute to India wears all the signifiers of post-colonial thinking, the kind where, hilariously, white people feel no qualms about congratulating the nearest Asian on "Slumdog" (See Accidental Blogger’s article, quotes and comments, plus funny video, for a fine description of why "Slumdog Millionaire" can be filed for accusations of colonialist thinking - clink that link). So is Boyle’s portrayal of the slums a homage to slumdog resilience or a cinematic prettifying, where the emphasis on "Destiny" patronises as the elements of Indian culture is exoticised for a Western audience? An audience that is well familiar with the feel-good romantic fantasies, and especially those so profoundly tied to monetary success. But it is surely not so much the utilisation of a culture or underclass for pop-entertainment that ought to offend as much as the inanity of the script and conceit themselves, the latter derived from Indian author Vikas Swarap’s source novel. That "Slumdog" wins a Oscar for Best Adapted Screenplay is surely a insult to the craft, being that is it based upon the most hackneyed dialogue and beliefs.

Entertainment is its only agenda and, like its protagonist, it gleefully ploughs through its turmoil somewhat obliviously. It champions "destiny" over distress and experience over intelligence and truly has no statement worth considering. Boyle sees the romantic achievement as the true happy ending of the film, although he states that Americans specifically ask him: "He got the money? He did get the money, yeah?!" Again, he seems blissfully unaware of the full ramifications of the concept.

Sure, I have been telling many people that "Slumdog Millionaire" is good, by which I mean it is worth watching and that they will probably enjoy it as I did, perhaps more so. I am reluctant to dismiss it simply because it is so currently popular, and also to avoid being dishonest because I did enjoy it on first viewing. I always set out to enjoy the film before me and I was kept aloft for the duration. As a feel-good parable with enough trauma to boost up the size of the gleeful all-win finale (and would that ever be a spoiler or unexpected?), it works tremendously well. It’s a fairy-tale where the happy ending is always in mind, is never in doubt. Love will champion all. And the millions probably won’t do much harm either. The British promotional posters are thoroughly misleading (it seems to be a marriage rom-com, judging by the confetti and embrace), or at least won’t prepare most for the litany of torture and corruption that is the scaffolding of the narrative… although little actual deprivation is depicted. "The FEEL GOOD movie of the DECADE" say the posters in type almost bigger than the title of the film itself. But Boyle does it all with such gusto and joy, or rather films the dark elements with hardly a hint of despair, that although you are suitably horrified, you do not come away feeling scarred. It is remarkable sleight-of-hand.

The young cast are effortlessly charming, and Dev Patel gives a career-making performance of vulnerability, charm and humour that grounds all the pyrotechnics going on around him. As Jamal he is, as Sight and Sound notes, as impervious to the cruelty around him as "Oliver Twist" [2], and Dev is photogenic, winning and cautious in his performance, wafer thin as his character is, as unlikely perfect as his accent becomes. Jamal's brother Salim looks as if he has wandered in from "City of God", and Freida Pinto as Latika is gorgeous, even though she is nothing more than a token prize. It is often funny and always engaging. And it must be said that the soundtrack is great too. All this is the good.

The dashes of "Salaam Bombay!" and alternative Asian cinema go some way to salvage Boyle’s film from the curse of the shallow feel-good flick, and help to forgive many clichés. It is a parable, so that the truth of the film is a matter of archetypes rather than plausibility. The litany of abuses suffered by the main trio are there to bolster the fairy-tale ending, but it is not particularly earned, neither by the characters or the narrative contrivance. The emotional tempo of a Danny Boyle film is often that of a commercial, at the service of the cool/hip/sad/pretty/etc moment rather than a coherent thread. One moment a humorous slum celebration, next slim neo-realism, next a rascally picaresque romp, next a heroic rescue mission, the next a gangster flick, next a gameshow, next a music video. Et cetera. There are always enough tricks to please the eye, although Boyle never quite pulls off an evocative simplicity in the manner of "The Blossoming of Maximo Oliveros", where the kaleidoscope of slum colours is derived organically from the natural array of litter.

Far more problematic is this film’s happy lobotomised view of fate: it is that the poverty and hardships cause no credible trauma in the characters. That’s Destiny! Latika is raped by Salim; the brothers see their mother murdered (luckily, Jamal has some kind of religious vision which immediately tops this loss); they are beaten by cops; they live in dump sites; there is the slight hint of starvation; their friends are abused… But when Jamal meets an old friend in the street, blinded deliberately to increase his begging power, the old friend merely accepts his lot like a good martyr and absolves Jamal of any guilt or responsibility by telling him that the only difference between them is that Jamal is the one that escaped such a fate. Destiny! Boyle presents a somewhat garbled and condescensing vision of the role of "Destiny" in the film, and seems to present going on a gameshow as taking charge of fate ... which, no matter how he tries to assign this to an Indian context, seems a particularly Westernised vision of taking your life into your own hands.

There is precious little bitterness, outrage or acumen in this slumdog’s world. And the romantic angle is just the substanceless pap that holds up vacuous girl-and-boy narratives of bad writing and fragrance adverts the world over. If we are to take the film’s colourful aesthetic and short attention span as life filtered through Jamal’s view, then it’s like that of a passive kitten being entertained by shiny colourful sweet wrappers, even as it is being kicked around.


3 - WORTH A MILLION, THEN?
Upon leaving the cinema, my friend declared that he loved it whilst suspecting that it actually wasn’t very good. Indeed, there are surely plenty more films more worthy of the Golden Globes, Oscars, and whatever else they hand it, but perhaps fewer that are unashamedly as popularist and enjoyable. Similarly, I enjoyed "Hellboy 2: The Golden Army" whilst recognising its serious weaknesses that surely makes it Del Toro’s lesser work (I wouldn't begrudge technical awards). Or, to look at something a little more comparable, "Walk The Line" was thoroughly amenable but also utterly pedestrian and predictable: it would be nice to expect more from award-winners. "Slumdog Millionaire" has plenty of dazzle, but I suspect is more pretty packaging with a little kernel of grit that rattles in an otherwise hollow parcel.

I believe my conflicted and ambivalent response to the film is clear. But if we really are talking Best Film and Best Director ever... In 2008, "Gomorrah" was far bolder and more enlightening in its exposition of slum and criminal lifestyle; "Let The Right One In" was far more surprising and exemplary in its juggling of restraint and grandstanding; similarly, "The Dark Knight" transcended its genre; and "The Wrestler" was a far better piece of classic formula. I would also argue that all those films had superior and more subtle editing ("Slumdog" won for that). But, again, "Slumdog Millionaire" is a remarkably popular film, and one cannot underestimate the draw of those twin dreams of wealth and love, with the preceding story of hardship surmounted. This time they are in a Bollywood-style package which may be fresh and surprising to Western Audience unfamiliar with Indian cinema of any hue. That Boyle makes anything coherent and successful out of such a grab-bag of moods and references is surely noteworthy in itself. It is ultimately more "Oliver!" than Satyajit Ray. It’s entertaining-good, but not award-good. Award winners should surely be of some originality, should epitomise some aspect of the art form, even when playing to the crowd, and should hold up under scrutiny. Definitely not award-good.
*
[1] "Mumbai Rising", Alkarim Jivani, Sight and Sound, vol. 9, issue 2, February 2009, pg's 40-41
[2] "Slumdog Millionaire" review, Geoffrey Macnab, Sight and Sound, vol. 9, issue 2, February 2009, pg's 75-6
Posted by Buck Theorem at 3/09/2009