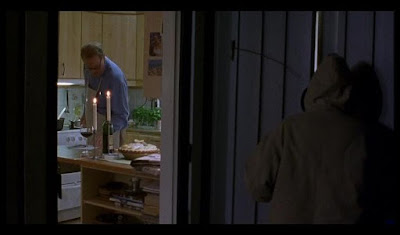 Swedish melodrama by Bjorn Runge based around three couples and a night of secrets, shouting, sharing, absolution, etc. You know the score. Comparisons with Bergman’s family dramas are obvious, but the roaming camera pursuing and swinging between characters looking for cracks and blame seem more akin to Haneke. If anything, despite a quality cast, Runge’s allowing everything to be resolved by histrionics only shows how carefully calibrated Bergman pitched his melodrama. Despite its chilly, despondent disposition, "Daybreak" has more in common with soap operas.
Also like Hanake, Runge ultimately comes out as hectoring and exhibiting moral superiority. There is evidence of casual humanity, but in the end the blame is - as in Hanake - with a middle-class bourgeois who Won’t Face Things and earnestly live their lives in denial. The oddness here is that Runge throws culpability mostly all on the men. A builder who works so hard to earn money for his family, he never spends time with them. A man so embedded in his own loss of his daughter and disgust at the outside world, especially people of colour, that he wants the house bricked up so no one can trouble him and his wife. A philandering doctor about to lose his job and family who, when confronted with painful truths over a dinner of revelations, simply keeps saying he is going to make dinner or coffee to comical proportions. And, oddest of all, a man who left his clearly disturbed and demanding wife for a younger woman years ago. He is obviously happy with his new life, and his ex-wife clearly needs psychiatric treatment and a restraining order; and yet perversely we are apparently to empathise with her agony, with her inflicting what can only be termed torture upon her ex and his wife, for this is the only way he can be made to face the grief he has caused so that she can achieve closure. The ex-wife is left to wander into the dawn, presumably cleansed and less sociopathic, but I wouldn’t bet on it. It’s a fine line between addressing the flaws of average people for a humane outlook and criticising those mistakes into something more judgmental.

The overt symbolism is occasionally cloying too. The bricking-up-the-house is a decent conceit, for it generates a little quirk and mystery besides representing willful alienation. But we start with the graphic removal of the heart; a car chase that ends with them going in circles; a moment where the different narratives briefly pass one another at a crossroads; and then, when revelations have been made and absorbed… daybreak. Like firearms, hysterical characters are often cheap dramatics in search of meaningful drama. More reliance upon the fine cast and greater restraint might have given the show more elegance 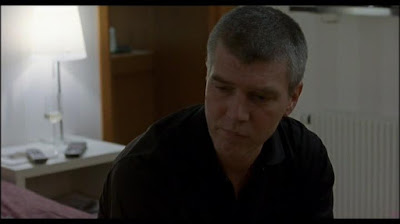