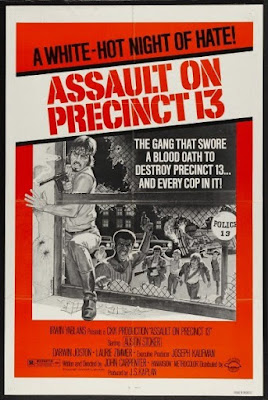 
The story of John Carpenter, as any fan knows, is that he used to deliver stripped down, witty, genre-savvy thrillers and horrors, accompanied by spare and dated but wonderful synth-scores. I believe "Dark Star" (1974) to be one of the best science-fiction comedies ever made. I think "Halloween" (1978) has some the best direction ever, and I can watch it endlessly for composition and suburban mood only. Inbetween, Carpenter made "Assault on Precinct 13" (1976), which is pretty much his zombie homage as re-imagining of "Rio Bravo". It reminds me of Walter Hill before Walter hill kicked in. But that early work especially...

Carpenter starts with a shoot-out that lacks any of the satisfying punch that an opener might rightly want. It's fast brutal and ugly; the parties involved are anonymous, disembodied voices. It starts as it means to go on, in shadows and washed-out hues of blue, with measured pace and menace and the menacing ominous synth riff that frequently falls into white noise. A fresh black cop babysits a station just about to close down; on the streets, silent gangs decide to exact some revenge and kill a little girl, whose father kills the murderer and then takes refuge in the non-functioning station. The gang surrounds the station and stages a kamikaze assault; inside, the cop, the girl and the infamous criminals who just happen to be there find themselves forced to unite to defend themselves.

It's simple and pulpy, peppered with hard-boiled dialogue, humourous asides and offbeat treats - such as the criminals playing "potatoes" to decide who gets to go on an escape mission. The film benefits from excellent performances from its leads, who strike the right balance between the playful and earnest. Darwin Joston as Napoleon Wilson looks like a prototype for "Escape From New York's" Snake Pliskin. Laurie Zimmer excels as the level-headed and capable desk-girl turned soldier, standing up to and alongside the guys without once compromising her femininity. The characterisation and integration of sexual and racial issues is both distinctly Seventies and subverted. As Rumsey Taylor notes:

In this way, the viewer never feels insulted and never quite knows who will do what. There are shocks - the death of the girl - and small moments that surprise our sense of cultured morality. Should we really root for convicted murderers? We certainly take as much relieved, cathartic pleasure as they do when they start popping off the shotguns. The father exacts revenge, but it leaves him catatonic rather than heroic. And when the other desk girl suggests they throw him outside, since he is what the gang wants, and the others stare at her and she says "Don't give me that civilised look!", the conflict between morality and the sacrifices one might make for survival is kicked right out in the open. Hadn't we already thought of that plot option before she voiced it? And what about the potential and underplayed romatic frission between Napoleon and Leigh? She seems like an otherwise sensible woman...

Appropriating and playing with genre types and expectations, "Assault on Precinct 13" is both entertaining and loaded with social commentary, like all the best b-features and pulp fiction. The gangs are rendered with a near supernatural aura... silent and near-invisible, climbing through windows like vampires, acting en masse like zombies. We are far from the fast-talkin', wise-assin' gangsters from a hundred films and shows. Yet, this never once unbalances the realism, pushing into something more allegorical. It's a rare trick for a crime thriller, and neatly accomplished. Even better, Carpenter totally subverts the idea that quiet, orderly streets mean peace and discipline. This are silent communities where the ice cream man keeps a gun at hand and where the empty streets mean you won't get any help.

Great stuff. I feel that Carpenter (and Walter Hill, who you mentioned) were just about the best at this type of film: taking a cliched set-up (and usually a very cliched set-up) and boiling it down to the essence, and so creating something almost other-worldly. The use of cliche means that any slight twist in the subsequent action is subversive- the roles in Assault on Precinct 13, as you mentioned, but also Carpenter's The Thing (where questions of who is right, who is brave and who is who recur, put to us with such minor-key elegance and never at the sacrifice of action) and Hill's The Warriors, which is somehow more than its simplistic premise, in a way that is hard to define.

Assault on Precinct 13's soundtrack is my favourite, ever, by the way. Apparently the riff to the main theme was Carpenter's attempt to copy Led Zep's 'Immigrant Song'. Have a listen, it's true!

Yes, I totally agree with you that there is an elusive effect created by the paring down of genre, an otherworldliness that is both compelling and intelligent. It doesn't seem like an ambience that modern action editing and pacing preferences care to reach for, or can emulate anymore.

Also, Carpenter always had a little tongue-in-cheek to him, unlike Walter Hill, I feel.