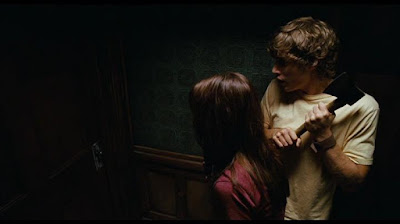 Diverting but ultimately mediocre haunted farmhouse blending of American and Japanese horror by the Pang brothers. Like their former supernatural scarer "The Eye", the Pang execute some decent atmosphere and spooky moments, all with visual panache, but similarly it progresses into a car crash of logic and dramatics. White-faced, jittery digital effects ghosts and sunflowers make for an odd combination, but you can’t completely fail with the scary sound of someone running around upstairs when you know you’re alone, or something ominous in the basement. There is a nicely staged bird attack, but this too ultimately is all show and no point. Perhaps the creepiest and subtlest detail are the claw marks leading to the cellar door… which strangely nobody notices.

Not knowing what to do with the end, it falls back on the demonic murderous father-figure rampage. A flip is switched and there he goes, just to trigger some ending of some kind. Which immediately makes the prologue a cheat: in the showdown, our rampager spouts the usual psycho-on-the-loose platitudes about women being bad girls and not doing what they’re told, and so on - but in order for the prologue to achieve ambiguity, he did not behave that way at all when we first experienced him going berserk. Not one psychotic word. Trying to make sense of this final revelation makes the ghosts that particularly confused brand who seem to be trying to send a warning to the new house owners by attacking them and scaring them to death. Japanese ghosts in particular are vengeful and confused manifestations - they often behave this way - but sending such a mixed message doesn’t help with internal logic here. As with "The Eye", it is this somewhat disastrous last act that sabotages any goodwill earned in the set-up. 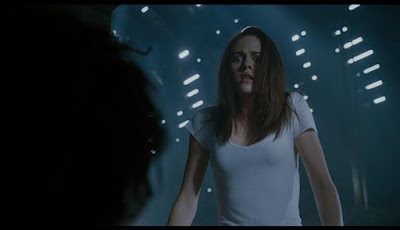