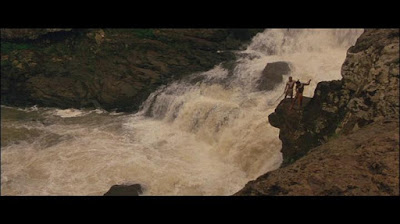 
Ultimately the missionaries of the European Catholic Church have come to eradicate the Guarani Indians of South America just as much as the slave traders and ruthless Portuguese; but rather than with enslavement and massacres, the Jesuits use the passive-aggressive means of faith and conversion to erode the Guarani way of life. There is cognitive dissonance between the apparent ‘faith’ of the film and what we see: it can create martyrs of the missionaries and claim that the spirits of the dead Indians live on, but this is no consolation for a massacre; it is more like denial of religion’s involvement in genocide - both physical and cultural, as much as mercenary slave traders - and the believing in some vague notion of an afterlife to wave away the horror. The film patronises the Guarani, concerned only with their plight through "The White Man’s Burden", through the angst and sacrifices of its white protagonists. Thus, as movies have always approached the most elusive of societies. 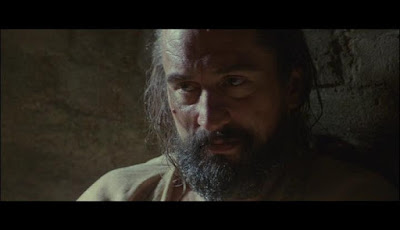 "The Mission" does comes close to something credibly ‘divine’ by casting the jungle as Eden and in De Niro’s salvation by penance and reinvention; but these traits are more to do with the natural generosity of the scenery and narrative’s forgiving Indians. There is little evidence of the friction and likely complex reactions that accompanies religious conversion and scripture. The Guarani simply give themselves over to the Jesuits - that this is ultimately their only way of survival is muddily conveyed (so as not to mitigate the Jesuit good works), and how they feel about this is never addressed. The Jesuits come and provide legal protection against the slave traders: the true enemy here is greed and political corruption, a merciless growth of global consumerism and expanding plunder; the mission in contrast creates an idyllic socialist Guarani factory of production where profits and workload are evenly distributed and put back into the mission. Again, though this appears to be good works indeed, one can assume that the Guarani had an active social and bartering system of their own, long before the Jesuits arrived. This lack of any real understanding of the natives upon which the drama is invested in is a truly grievous absence.

The story runs smoothly, but any depth dissipates into pretty visual aesthetic; the drama squanders death as sentimental martyrdom. Where we should feel outrage and horror, we are pushed more to the moral superiority and redemption of our protagonists. Indeed, it is martyrdom that validates faith. De Niro as Rodrigo Menoza, begins as a slave-trader and murderer, and when he murders his own brother in a fit of jealousy over a woman, he becomes a missionary, a transformation that carries some weight as a tale of redemption. There is also the sneaking suspicion that De Niro may well be miscast, which is offset by a number of small moments where he coveys so much with his eyes. 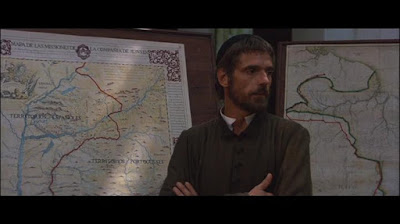 In fact, it is in small moments that the film resonates. Jeremy Irons/Father Gabriel wooing the Indians with music, for example (it’s a nice moment, although the allusions to the story of "The Pied Piper" also helps to infantilise the natives). De Niro being manhandled curiously, being forgiven and accepted by the Guanari. Jeremy Irons shouting "Jesus is Love!" as if he is telling De Niro to go fuck himself. The Indian boy who has adopted De Niro wordlessly asking De Niro to fight for him by resurrecting the man’s sword. Irons’ loss of faith in humanity is also interesting enough. But greater insights are not recognised: the moment where the Guarani reminds His Eminence that he too is a King ought to speak volumes, but it does not because the film has barely identified this itself. The natives are children of Eden, generic and lacking character; we learn nothing of their ways or the conflicts when integrating with the Jesuits.

And in this way, the film condescends and ultimately insults. When his Eminence states, in closing voiceover, that it is he that is truly dead and that the Guarani live on, and when the final words on screen are for the missionaries that risk their lives for the Guanari rather than the Guanari themselves, one sees how myriad the ways of colonialist self-importance and pious self-congratulation; not only in the moments of truth in this particular fiction, but also in the post-colonial self-regard of white-man’s film-making. John Boorman’s "The Emerald Forest" is a scruffier and pulpier film in comparison, but it is more sincerely dedicated to merging white experience into native culture rather than vice versa, and more respectful too. "The Mission" is a pretty film and not without resonance - and the Morricone score helps - but its ugliness is in using its true victims as a mere branch from which to decorate it’s white guilt and self-regard. 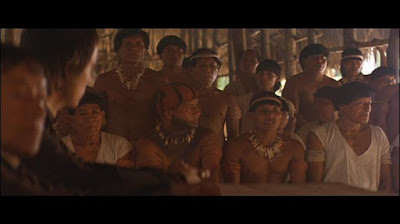 Great piece. The film's other cop-out, it seems to me, is in setting up a total opposition between pacifism and active resistance: Jeremy Irons makes it quite clear that they're not compatible, but then the film tries to have it both ways, celebrating DeNiro's activism with Errol Flynn music and beautiful visuals, and Irons' pacifist sacrifice with weepy music and slow solemnity.

I absolutely agree with you on the passive/active resistance conflict ... and don't forget that DeNiro hangs on to life just in order to see Irons go down. Martyrdom naturally needs an audience, although DeNiro's look is pretty inscrutable (also see, for comparison, "The Great Silence"). The issues the films raise are never resolved and martyrdom seems to be the only solution offered.