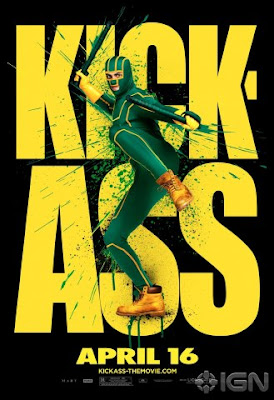 When "Kick Ass" first came out, Mark Millar And John Romita Jnr’s comic was an instant phenomenon. The film came out seemingly when the comic had barely finished. That is, barely finished volume one. It’s concept is simple: what if a comic book nerd took it upon himself to dress up and fight crime in the real world? He tries it out, gets hospitalised a couple of times, has some success when his fighting a bunch of thugs gets filmed and uploaded to Youtube. In fact, he becomes an internet and cultural phenomenon. At this point, there is much blood and guts, some lowkey adolescent humour and wish-fulfilment fantasy and not just a dash of self-loathing. "Kick Ass" looked like it may have something to say. And then the story introduces Big Daddy and Hit Girl and Red Mist and organised crime. The comic moved into "Batman" and "Daredevil" territory. Big Daddy was a "Punisher" like vigilante figure with a pre-adolescent ninja daughter. The defining image of "Kick Ass" became not so much "Kick Ass" in his ski suit, but Hit Girl covered in gore from head to toe.

Which you are not going to see in the film adaptation. Announcements of the film adaptation came early in the comic’s first run (reprints with variant covers were catnip for collectors and fooled others into buying editions they already owned) and my first thought was, How the hell are they going to do that? The fact that Matthew Vaughn’s film - writing with Jane Goldman - is not the total compromise that might have been expected is remarkable. Even the fact that a mainstream film going by a mildly swearing title seems remarkable (that, along with "Inglourious Basterds", has Hollywood ever offered such a mild-sweary-title season?). It surely indicates how the ultra-violence and taboo-breaking of the alternative art scene has gone mainstream. So maybe Dave Lizewski - a.k.a. Kick Ass - is older than I imagined from the comic, and as played by Aaron Johnson he is surely more American every-nerd, and far less ugly and manipulative than his comic book counterpart. But Hit Girl is still an eleven-year-old super-psycho. So: sure, we get a hoodlum being microwaved, but the film simply leaves out much of the hand-on super-gore, and it inevitably has to. Hit Girl barely gets a bloody splatter upon her. We don’t get the nasty "Kick Ass" torture session, complete with his testicles being frazzled. And also, rather than the bloodbath finale of the comic, we get a thrilling and funny and totally comic-book showdown, complete with bazookas and jetpacks. It goes for broke and quietly detaches itself from the potential realistic ties the initial concept promises. So, yes, the film is toned down, but the fact that it is a huge mainstream success is - to repeat myself - remarkable.

The truth is that it was obvious halfway through the first volume that "Kick Ass" really had nothing profound to say about the little guys dressing up and playing at being crime fighters. You shook it and it was hollow, so that it’s phenomenon was based upon the shock-value of under-age killers and buckets of gore and bad taste. It is more "Sin City" crossed with indie coming-of-age tale rather than for fans that really, really want "The Dark Knight" to come true. Rather than engaging with the problematic murderous consequences of vigilantism, with all the grey areas and troubled morality, "Kick Ass" fuelled itself on Dave Lizewski’s good intentions and how cool the unstoppable slaughter-machine Hit Girl was. Recent Batman is frequently more focused on the difficult ethical shadows that he moves in than the ostensibly more realist "Kick Ass". In actuality, Romita and Millar conceived the Big Daddy and Hit Girl storyline first, and then stepped back for the Kick Ass story, which does create some critical distance, but serves mostly to accentuate Lizewski’s loser qualities and envy of real hero-murderers. It left me queasy in never once noticing or questioning any humanity of the bad guys. They were comic book bad guys, useful for humour and body count. 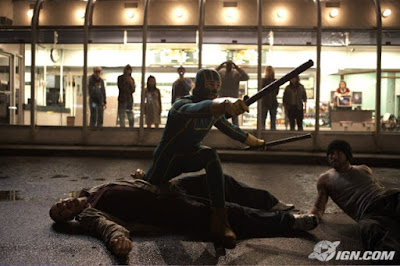 The film adaptation bears all the good and bad points of the comic and holds with the trajectory of becoming increasingly fun but less poignant. What we are in fact left with is good old guilty pleasure exploitation entertainment. Not as clever as it thinks it is, the comic "Kick Ass" remained compelling, mostly for the WTF factor. But not only that, because it also had a couple of neat twists that you may not have been expecting. These twists are lost in the film because the adaptation has so much more bad guy back story: so we know that Red Mist is a villain from the start (and he doesn’t get turned on by torture either, making him a genuine sadist), because we know the bad guy plot to nab the good guys (as dubious as that ‘good guy’ status may actually be); we see Big Daddy and Hit Girl overcome early so that the comic’s surprise that they have actually been caught is also gone. The narrative surprises, therefore, are lost in adaptation.

The film makes up for this with lashing of bonus humour and a comic book aesthetic that stays on the right side of drowning out story. Thankfully it also eschews much of the tedious angst that hobbles Peter Parker and the characters of "Heroes" (the kind that is meant to make them more human, but actually makes them repetitive and wearisome). The first fights Kick Ass engages in both have their moments: in the thrill of the moment, Kick Ass gets knifed and we feel very much thrown back in the real world for a moment; in the second, he shames the thugs into giving up, which is the last time the film will recognise the complexity of confrontations. The fight scenes are thrilling, kinetic and visceral, shocking and fun. Considering how Manga Hit Girl is, Vaughn films and edits in a way that manages to keep her killing sprees all looking within the edges of plausibility, using her size and light weight for her advantage in running up bookcases and slipping under the range of adults. We go with it.

As everybody now know, this is Hit Girl’s film. Everyone else is good - I am fond of Christopher Mintz-Plasse’s geek style (and vengeful geek style hopefully helps nudge him out of the typecasting he has to struggle against since McLovin') and Nicolas Cage puts in another bizarre performance - I always imagined Big Daddy as more Henry Rollins, but Cage turns him into a vengeful comic book artist gone psychotic. But it is Chloe Mortez that makes Hit Girl her own, exceeding what is on the page. She invests Hit Girl with a sweetness and humanity that the comic doesn’t touch. And so we go on to forget how troubling the character concept is and celebrate its outrageousness and Mortez’s dazzling performance. Why shouldn’t girls have some fun and trump the guys for once?

As a piece of superhero geek-and-gore vigilante excess, "Kick Ass" is an instant hit. It is a sunnier version of the comic book source, and a damned site nicer to its put-upon would-be hero. these are not necessarily bad changes. It manages to have it's cake and gorge itself too. When Hit Girl uses night-vision, one can also feel themselves playing the tie-in game. When our heroes are tortured and are about to be executed on television, the audience are glued, and when the TV pulls the plug, everyone just moves over to the internet stream. No one seems bothered by watching, and in fact they seem incapable of not watching, apparently only able to process horror as taboo-breaking entertainment, and apparently never able to pull themselves away from entertainment. It is surely too much to read this as a criticism of the very audience watching. Shock IS entertainment, "Kick Ass" persists, but it doesn't go too deep. And that is exploitation cinema and so somehow it pulls it off. Unencumbered by moral reflection and letting go of the reality shackles early on, it’s a funny, thrilling and totally winning guilty pleasure.