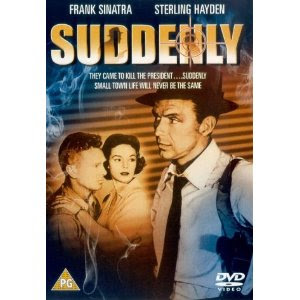 In a little, sleepy, Republican town of Suddenly, a officer pauses to share a joke with someone passing through that “things happen so slow now, the town councillor’s figuring to change the town’s name to Gradually.” But it’s name comes from a time when it was a wilder place of gamblers, road agents, gunfighters, probably prostitutes, that kind of thing; the kind of people that make things happen ‘suddenly’. It shouldn’t be forgotten what kind of wildness built the town.

It’s a regular ol’ day in Suddenly. The most conflict seems to be when Sheriff Tod Shaw has a little tiff with the female that he is after, Ellen Benson, because he buys her son “Pidge” a cap gun when she has expressly forbid it. She is still grieving for the loss of her husband in the war, you see, and abhors symbols of violence. Oh, he explains that it’s not the weapon and it’s the man, et cetera, et cetera, but she isn’t having any of it. The Sheriff’s affinity with violence seems also to be one of the reasons she is playing hard to get. Her father-in-law is also tired of Ellen’s anti-violence moaning. She is, after all, just a woman and doesn’t understand that there is horror and Evil in the world that can only be resolved and fended off with counter-violence. But not to worry: her silly, womanly anxieties and philosophies will soon be shown up for the bunk they are when three hoodlums take over the family house for a plot to assassinate the President of the United States who is apparently - or suddenly as it may be - passing through. What follows is a little chamber piece in which decent people and hoodlums argue it all out whilst they wait for the assassination attempt. 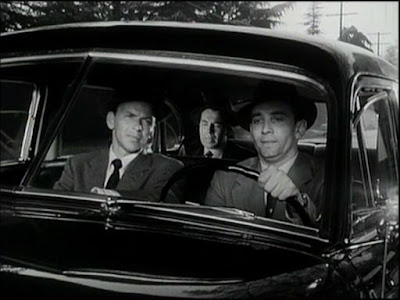 Conversely, Ellen Benson (Nancy Gates) would be better off without Sheriff Shaw because he’s an asshole, and as performed by Sterling Hayden, a wooden chunk of an asshole. He is belligerent and bolshy with the life-long ease of a born bully; juvenile in his responses to Ellen, swaggering with the unintentional humour that posturing machismo always brings. On the other hand, if she wasn’t such weak tea, she ought to notice that assassin John Baron is played by Frank Sinatra and is a far more interesting man. Sure, he’s a murderer, but so is her beau and her father-in-law because they were all soldiers: Baron brings with him an interesting questioning of what it means when a Nation trains its men to kill. This grey area is quickly resolved by the Sheriff distinguishing between good and bad soldiers, those that come home to take on authorities roles such as cops and secret agents and those that liked it too much: Baron was born a killer, even if, as he says, “They” taught him how to kill. His mental health is probably more a result of this innate psychothic nature, the fact that he was left in an orphanage, that kind of thing, rather than a result of war trauma, of course. He’s a bad seed, see? 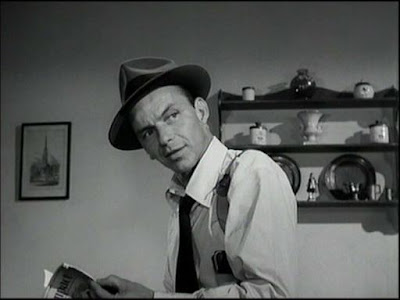 We are a long way from the home invasion scenarios of “Funny Games” and the like, but nevertheless there is a fair hard edge to the proceedings. The film implies Baron’s sadism and instability as much as possible, whilst never losing his hoodlum hat, and it’s fairly zesty with the expendable cast. Thanks to Sinatra’s performance, both mean and vulnerable with eyes full of uncertainty and a gutted sense of his own emotions, we have no doubt that he is capable of carrying out his threats against “Pidge” and the President. Sinatra brings the whole set-up alive in a community of otherwise stock types and rote performances. The film may try to side-step the issue of what turning men into killers might do to a generation, but he is far from a whiner about his lot and he does help to puncture the posturing of the ex-servicemen around him just by being there. He is also living the American dream of Capitalism and firearms: he doesn’t have any feelings about his job, he is just doing it for the money and marking his place in the world by killing when told and paid to. It’s just business. Baron may be wrong, but that doesn’t make the little conservative enclave he invades right just because of their pretences at patriotism and overall recourse to violence which is just as quick as his, although arguabloy justified as self-defence. Writer Richard Sale also can’t help but give Baron the best dialogue either. The irony is simple: the bad guy bring with him the dark edges of noir and is the only point of fascination in the film, the near only thing with blood running through it’s veins. Sinatra is good casting: he is tiny compared to the hulking Hayden, but Sinatra holds his own by doing and not swaggering. Only with the TV repairman - who may as well wear a target on his chest when he turns up late in the proceedings - played by James Lilburn do we get another actor actually awake and complex, simultaneously confused, outraged, bemused and shocked.

It is all highly implausible, of course, with the feel of an expanded play. The play with the cap gun and the television set is quite neatly handled, right under the assassins’ noses, and the ending - and we’re never in doubt as to the how things will turn out - gives both “Pidge” and Ellen a chance to resolve issues with a firearm. That’ll learn’em. And later, it will be the Sheriff playing hard to get and Ellen doing the chasing. That’ll teach her. 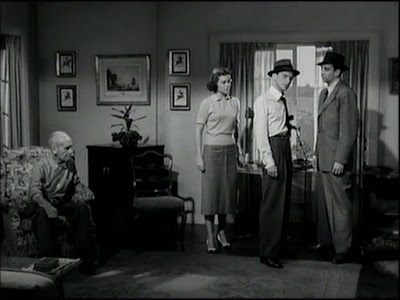