WE ARE WHAT WE ARE 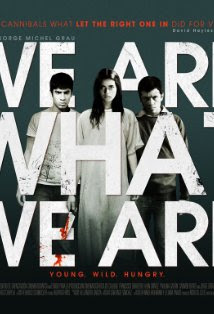 ---- Although comparisons between films is often just a flip manner in which to cash in on another’s reputation, as well as critical shorthand, it is easy to see why “We are What we Are” has been dubbed the Mexican “Let The Right One In”. It’s because both films are interested in their protagonists’ emotional, home-baked relationship to the horror they are involved in: the horrors are tied to more mundane daily anxieties and barely repressed angers, alienation, poverty and needs. The concentration on the domestic is vital: one of the terrors of “We Are What We Are” is surely how bleak the household of our cannibal family is; how devoid of any culture other than ‘the ritual’, how blank the walls, how limited the family appears to be in experience. They apparently spend all their time sitting around brooding, doing nothing, squabbling, or preparing for the kill.

When their father drops dead from a poisoning in a shopping mall - the mall staff drag him away and wipe up after him: it’s a broad but nonetheless effective symbol of the disposability of the poor - the wife, two sons and daughter that he leaves behind are thrown into turmoil. Family dynamics become strained: a fight for dominance between the matriarch and the eldest son; the rivalry between the more thoughtful and empathic elder son and his younger sibling; the careful manipulations of the daughter/sister, who proves to be the real force behind the family in light of mother’s insanity and the brother’s volatile and insecure natures.

Later, the eldest son’s other secret surfaces: we follow him as he shadows an openly gay man and his friends to a club in perhaps the film’s best sequence, revealing a colourful, pounding, liberated world that he has barely ever seen. His first pursuit and taste of another identity seems to come as a revelation. Inevitably, allegiance to the family overrides all, and the general ineptitude and emotional issues of the family weakens their ability to keep a grip on things.

There is even a moment of pure farce when the eldest son brings his first victim home, only to find his mother already has one in the bed. Slowly, the violence increases and distresses and the gore comes full on. The film works on a slow burn: we have had a clue as to how abominable their practices are when the brothers first attempt and fail to kidnap a child, but by the end we are in no doubt how horrific their ritual actually is. If it all ends typically in grand guignol style, it is not surprising, probably needing to lay bare the awfulness of their oppressive lifestyle and cannibalism. Additionally, as if to drive home how the desperate become monster types, the local prostitutes seemingly become a gang of zombies, moving in upon the family to exact their own revenge. Elsewhere, the police are bumbling, boorish and given to slapstick.


“We Are What We Are” casts a bleak and blackly humorous world in grainy low-budget style that has seemed so suited to horror since the Roger Corman quickies, through “Night of the Living Dead” and “.Rec”. Grau's film is llikely to be a minor cult classic, and probably exactly the kind of thing getting commentators envisioning a new wave of Mexican horror. But it is focused, resting upon its broad tying-in of horror and poverty motifs, mounting dread and a number of fine set-pieces.
Posted by Buck Theorem at 12/06/2010

Labels: cannibals, Frightfest, horror, we are what we are