For  Love’s Sake:
The Legend of Love & Sincerity
Ai to makoto 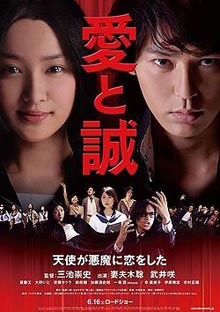 Takashi Miike is so prolific and diverse that’s it is almost a chore to keep up with him; he’s a master of genres and as punk as he is classical and consistently unpredicatable and surprising. Of late: “13 Assassins” and “Hari-Kari” one moment and “Yatterman” and then “For Love’s Sake” next. This also means that he shall often throw anything but the kitchen sink in if the material is a little, shall we say, silly and underwhelming. This is helpful when he is doing his Manga adaptations, because Manga is often quite bonkers and narratively wild and emotionally hyperbolic and ridiculous; or at least the bulk of Manga that gets adapted seems to be. “For Love’s Sake” is, for the most part, delirously silly and over-egged: it comes across like a parody not only of overwrought Japanese school dramas but also of Baz Luhrmann’s “Romeo + Juliet” and the teen romance genre as a whole. The performances of the musical numbers are, for the most part, very funny: the tracks are a mixture of Japanese ‘60s pop tracks and original songs with straight enough lyrics, but it is the characters lauching into musical numbers as if they believe they are in their own musical (which they are) when most characters around them aren’t quite so sure that makes it so all so amusing. Manga and Miike is often prone to changing mood and mashing up extreme and sentimental elements indiscriminately, and if the first half of “For Love’s Sake” feels like barmy parody, and is definitely funny, the second half is dragged down by that sentiment that asks us to take seriously the absurd and unhinged declarations of love by characters that feels very much like unhinged psychology. 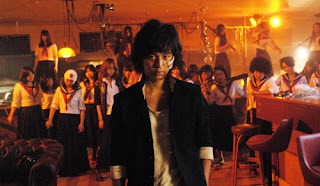 No one in “For Love’s Sake” is in good mental health. We are expected to go along with a main macho character, Makoto (Satoshi Tsumabuki) who solves everything with violence and who is indeed so violent that he will happily take on entire gangs and come out on top. Oh, and who happily slaps women around. Then there is Ai (Emi Takei), a girl who is delusionally obsessed with Makoto and whose insane pursuit of him with declarations of anti-violence and love are so trite, they are hilarious and surely satirical of youthful romancing; all that being in love with the idea of being in love, etc. When he keeps telling her where to go, you agree with him. Then there is Hiroshi who is also obsessively in love with Ai with that nerdy tactic of hanging around her in the hope that one day she might fall in love with him: the gag becomes that he turns up everywhere after her, but make no mistake that he is a stalker. The school of delinquents adds to the bunch of Asian dramas that make it look as if Asian education is a hellhole (I am thinking of, oh, “Confessions”, “All About Lilu Chou-Chou”, “Whispering Corridors”, “Friend”, etc etc). That the gangs are mostly femal dominated is a nice mixing-up of typical classroom gangs and this leaves plenty of room for the gag that most of the main bad girls are in love with Makoto. Oh, and there is the seventeen year-old boy who has the body of a middle-aged man too (he has some kind of aging disease??). It all comes across as the fantasy of some dysfunctional lovesick teenager with a fevered pop-addled imagination.
My favourite moment of violence? An unbroken take where the camera stays over Makoto’s shoulder as he wipes out an entire gang stuffing full a hospital corridor. But there is also the opening fight during which Makoto sings throughout the punches and kicking. All the dance numbers in the first half have their moments, though.
It’s overlong by at half hour and at least two songs and the earnestness drags as much as the emotional outpourings, although even the later passages are alleviated by sudden bursts of inventiveness: a bad girl’s flashback to her childhood trauma is brilliantly rendered as animation, for example. Even the closing Anime flashback feels like it might possess genuine emotional effect if we were not being asked to associate it with such ridiculous and two-dimensional characters. This, however, is typical of Manga and Anime where we are often to take at face value that people are in love, despite the lack of convincing romantic detail. Characters generally just end up shouting one another's names in various states of hysterics. Miike is also not always one to turn to for emotional engagement: there is often the sense that his films are experiments in free-form cinematic tricks and tropes rather than speaking deeply to the audience, but this depends upon the particular project (films such as "Rainy Dog", "Hari-Kari" and "Big Bang Love: Juvenile A" are different stories altogether).

“For Love’s Sake” is gorgeous to look at, funny and violent for the most part, then undone by the typical Manga sentimentality. If you are looking for the real deal about growing up with neglect and violence, look to Miike’s two “Young Thug” films for revelations, scathing insight and some genuine emotional engagement. “For Love’s Sake” shall not win many new Miike fans, but even at his most conventional, he often seems to be making all the films all at once and no one quite does it like him. There is no doubt that it is at least unforgettable, because Miike's work always leaves some kind of aftertaste, even if this example is candyfloss with punches and pretences of substance.

P.S.: The British Film Institute puff piece for "For Love's Sake" by Tony Raynes says, "This is the kind of movie that hits you, and it feels like a kiss." This indeed is indicative of the problematic nature of deciding what one is meant to take from the film if looking for any depth. It is also one of those faux-poetical nonsense summaries that seems to think equating hitting with kissing is something lyrical.
Posted by Buck Theorem at 10/18/2012