The Last of the Crazy People


French film directed by Laurent Achard, based on Canadian Timothy Findlay's novel ‘The Last of the Crazy People’ (‘Le Dernier des fous’ a.k.a. ‘Demented’): a coming-of-age story set in a dying little rural farmhouse where 10 year-old Martin watches his family as it’s besieged by poverty, repression, isolation and madness. Kind of. The trick upon reflection is that no one seems legitimately, technically "mad", but rather beset by a fierce mixture of despair and unfulfilled longing has driven some to apathy - the father - and others to distraction - the mother and brother. And whatever Martin is thinking, how he is filtering these experiences, we aren't too sure. Young Julien Cochelin's face is impassive and ungiving, making Martin quite an abstraction; it's a shock when a single tear quietly rolls down his cheek. His face remains so blank that it could be considered non-acting. He wanders around, all elbows and awkwardness, looking for morsels of affection. Around him, the adults give brilliant performances that fall just short of indulgent, bringing out the real tragedy of their inability to communicate successfully with one another. Martin is the opposite of his brother, Didier (Pascal Cervo), whose emotions both good and bad explode everywhere with the gusto of a wannabe poet. Dominique Reymond is the pale, elegant reclusive mother, screaming the house down in the middle of the night. Only the warmth of the maid keeps the family together. 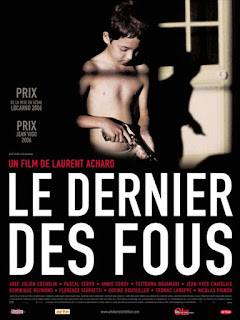 The Gothic trimmings are always welcome, most glaringly the mother as the Madwoman in the Attic and a sense of perpetual decay. It looks like a provincial idyll, beautifully framed, leisurely paced so that small details of the kitchen and the courtyard can be relished. Small gestures mean everything: the boy at the table football nodding to the girl; mother's stare back at her son so fixed, it looks like a freeze-frame. It's somewhere between the bleakness of Hanake and the dour humour of ‘Koktebel’. It is this that prevents the story from falling into the pornography of wretchedness, although as soon as a gun is introduced, all mystery evaporates. A gun is often cheap drama because you can tell pretty much how it's going to end up as soon as you see one. And when it finishes as you thought, you realise there was nothing new here, that no extra great leap was made, and that beautifully judged as it was, that's a shame.


Nevertheless, I am a sucker for this kind of rural dystopia, and although inferior to, for example, the thriller narrative of ‘I'm Not Scared’ or the chilling ‘Olivier, Olivier’, ‘The Last of the Crazy People’ succeeds as a minor but engrossing melodrama.