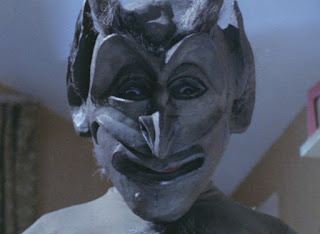 When I think of Pebble Mill, I think of being a kid in the Seventies and the show ‘Pebble Mill at One’, a lunchtime current affairs and entertainment programme. I think of safe daytime TV. Pebble Mill used to be studios outside of London that produced far more than just that, though. Under producer David Rose (whose track record is quite something, including giving us Terence Davies amongst others) Pebble Mill gave us ‘Penda’s Fen’ in the ‘Play for Today’ strand, directed by Alan Clark and written by David Rudkin. Despite its look of rural England and rolling hills, it’s anything but cosy lunchtime viewing. 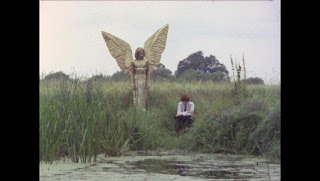 Stephen Franklin (Spencer Banks) is an uptight youth, mouthing conservative opinions, but his burgeoning sexuality increasingly makes him introverted and questioning all around him. Politics, sexuality, institutions, community and individuality, changing names, kindness and cruelty, art – it’s all here. It’s a quite an abstract piece and Alan Clark himself proclaimed that he didn’t know what it was about, but as a portrayal of an adolescent’s maturation set against his surroundings, rarely has a bildungsroman been so multifaceted on screen. At first the atmosphere is certainly tinged with the kind of abstractions that signalled the era’s uncanny horror, with Hammer Horror being a touchstone as well as the eeriness of serialised M.R. James’ stories and the elliptical narratives of such as Jerzy Skolimowsi’s ‘The Shout’ or Weir's 'Picnic at Hanging Rock'. (And to those ends, there’s a startling hand-chopping dream sequence.) At first, the moments where Stephen seemingly has visions seems to indicate that we are indeed in the realm  of the horror, of perhaps mental illness, but these prove to be simply manifestations of his imagination and alienation, of his thinking process. Through them, we see him discussing with deceased classical artists, envisioning demons and angels, and ultimately meeting Penda, the last pagan King. If it seems atypical of Clark’s work – as he is mostly known for neo-realist depictions and aggressive dramas – it is still characteristically tied to the sociological and English identity. It depicts rural villages as home to just as much personal internal narratives as anywhere else. 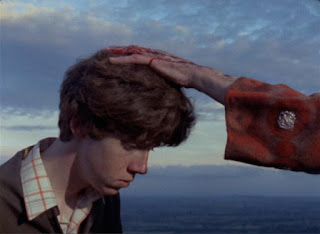 It’s wordy and weird and Rudkin’s remarkable script is a dense tapestry of religion, philosophy, mythology, sexual awakening, socialist politics and the arts, all the realms Stephen has to explore to unlearn the misconceptions and prejudices of his life so far. There is a wealth of difference between when we first meet him spouting disapproval all around him and the youth who later gushes that he wishes a childless woman will have lots of adopted children because she is interesting, embarrassingly effusing like it’s the first time he’s acknowledged and used his own capacity for generosity. He goes on to realise then that he is multi-faceted and contradictory and he embraces all of that: this journey of self-discovery is just the start. When we leave him, he is a far more introverted and sympathetic character than when we met, but there is a sense of sadness as well. He has been humbled by the scope of himself. It is quite a remarkable chronicle of one person’s journey to self-awareness.