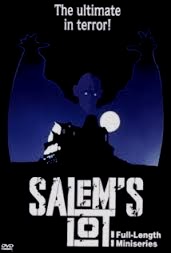 This scared the hell out of me as a kid, so I will always have a soft spot for this Stephen King adaptation that tells of a small American town gradually destroyed by vampires. This deterioration is watched by typical King heroes: a successful novelist and a teenage horror fan. Central is the old Madsen house with a gruesome, haunted reputation and the arrival of antique dealer Straker (James Mason) and his employer Barlow (Reggie Nalder). Overnight, the vampire is delivered to the quiet town in a crate and the deaths begin.

With two genre heavyweights Stephen King and director Tobe Hooper at the helm, expectations were high for this adaptation. The general consensus amongst critics appears to be that King’s novel suffered from the limitations of television, but the novel was never particularly explicit in its horrors. It was more interested in the menace, in atmosphere and weakening community. In this way, the TV film format 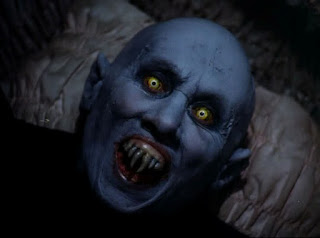 seems ideal for King’s picket fence society threatened by the supernatural. The wide cast of secondary yet vividly drawn characters that populate King’s fiction often offer a soap-like backdrop, yet there may be something to Peter Nicholls’ accusation of David Soul being a “predictably wet bit of television casting.”1 It is up to James Mason to deliver the acting delights in a nicely ambiguous turn as Straker. And it is also true that the moments of horror  that crescendo to a freeze-frame might hint at CBS censorship more than subtlety and yet the lack of gratuitousness doesn’t make any less scary. The same year, John Carpenter’s ‘The Fog’ created a similar community under supernatural threat horror, yet also demonstrated how a film may be both bloodless without compromising its violence too far.

Hooper’s ‘Salem’s Lot’, as Kim Newman has written, is a “respectable rather than devastating” adaptation that lives under the “baleful shadow of ‘Psycho’.”2 He identifies the more typically Hooperesque moment as that when a husband catches his wife and her lover and humiliates them with a shotgun. The feel of this scene - with the over-wrought facial distress and violence implied by editing rather than by outcome - is certainly more akin to ‘The Texas Chainsaw Massacre’ than the rather plain direction elsewhere (don’t forget that ‘The Texas Chainsaw Massacre’ was relatively bloodless too). For a moment, it seems as if it might transcend the Seventies TV demeanour and head into the  grimness of the period’s more notorious horrors. Nevertheless, there is enjoyment in its long running time and slow build-up of character and incident that is closer to the novel than the 112 minute film that was subsequently edited from the miniseries. 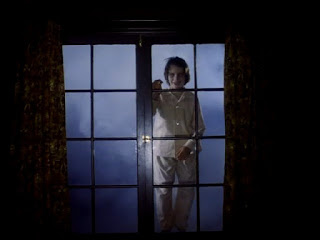 ‘Salem Lot’s greatest improvement upon the novel is in its use of the Glick brother vampires. In the novel, what mostly happens off-stage and is known through exposition is here given an unforgettable visual rendition. The vampire boys float outside windows, scraping on the glass, demanding to be let in. It is perhaps the film’s most memorable and chilling image, although certainly not it’s only one. I remember as a young teenager watching ‘Salem’s Lot’ and being terrified, not only by the vampires-at-the-window moments, but also at the graveyard cliffhanger and the Mr Barlow reveal. I remember being excited that it was on television a second time (this was in the prehistoric era where there was no guarantee such a thing would ever surface again) and watching from behind a cushion because I knew it was going to be scary.

The film’s greatest deviation from the novel is in its conception of Barlow the vampire. Hooper has opted to make Barlow a homage to Max Shreck’s ‘Nosferatu’: he is no longer the pretentious, condescending orator of the book; he is now primal and animalistic with Straker now his mouthpiece. Barlow’s entrance is another unexpected shocker, but his appearance gains the story little more than monster-make up which is nevertheless a strong defining image. It is at its best when Barlow invades an ordinary domestic dinner scene. Its ambience and shock moments certainly worked on me again and I am sure this particular mini-series traumatised a generation of horror fans. Those Glick brothers…

In many ways, ‘Salem’s Lot’ is a successful King adaptation. Despite its TV conventions, ‘Salem’s Lot’ manages some rawness, black humour and shocks. It is at least frightening and atmospheric and has aged better than the televised and fondly remembered version of ‘It’. It’s a long way down from here to ‘The Lost Boys’. There is no vampire genre deconstruction as in Romero’s ‘Martin’, but ‘Salem’s Lot’s greatest strength is in allowing the vampires the vivid visual set-ups and juxtapositioning them against the otherwise naturalistic framing. Vampires sitting in rocking chairs and coming to life on autopsy tables will still provide the delights for genre fans. I will always be fond of this TV shocker. 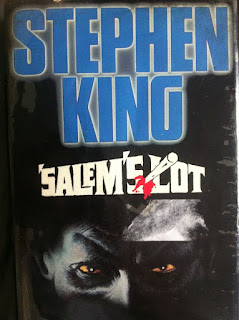 ·         Larry Cohen made A Return to Salem’s Lot, another television horror in 1987, but its relationship to the original novel and film was highly tenuous.
·         The 2004 remake of ‘Salem’s Lot’ with Rob Lowe and Donald Sutherland is slicker but it does nothing to improve the story.
·         Stephen King’s anthology ‘Night Shift’ contains a short story that vaguely follows up ‘Salem’s Lot’ called ‘One for the Road’. Typical of the collection, it is a slight, only mildly satisfying short.